There are very few pleasures in my life akin to traveling to a new destination to see one of my favorite bands perform. This pastime has allowed me to explore cities all over the US and immerse myself amongst locals, which is truly what I love.  Wanderlust sigh.

Recently, I traveled for the first time to Cleveland, Ohio to see U2 perform on the Joshua Tree Tour.  This was my second time traveling to see U2, the only band whose music soars better in stadiums than in smaller venues, and as always it was resplendent.  I have climbed highest mountains, I have run through the fields, only to be with them (sic).  Who better to spend a Cleveland summer night with, than ~70,000 locals?  It was a beautiful day…sorry not sorry.

Even though I only had a limited amount of time, I still managed to pack in a ton of sites and eats while discovering that there is so much more to see.  Believeland delivered like Lebron on an alley-oop from Kevin Love.  Guess I’ll just have to come back when NBA season starts up again because…

Flying to the Northeast from California sucks.  It takes forever and you lose three hours on your way there, so inevitably if you leave in the morning, you’re getting there in the late afternoon.  I rented a car because I like the freedom, and Cleveland is a sprawling city with many neighborhoods, so I felt this was the easiest way to get around.

As I only had a few hours before the concert, my first priority, as you may have gathered from every other city, was to fill my gaping hole of the organ I call my stomach.  Cleveland had a boom of Eastern European immigrants in the roaring 20s, and I am grateful for that because they’ve cultivated a rich culinary heritage, with no restaurant as institutional as Sokolowski’s Inn. 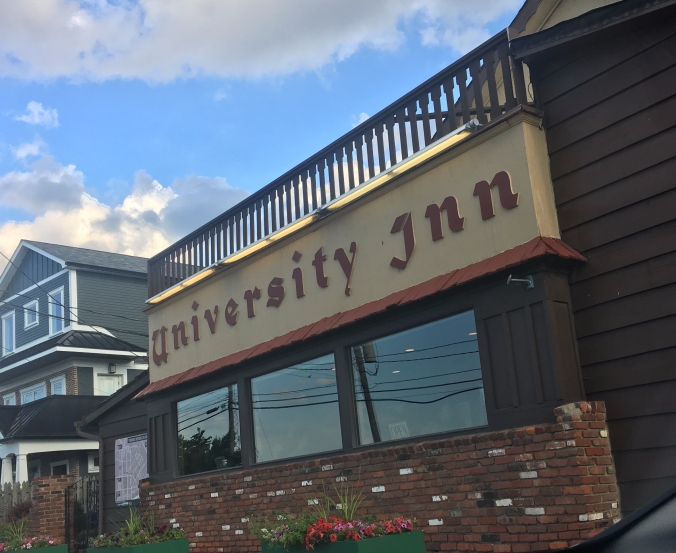 You just have to accept it, there’s gonna be a wait here.  It’s going to be very long, you’re going to be smelling butter and flour for like an hour, but once you get to the head of the cafeteria style line, you will be ready to eat everything, and when you see the food, you will want to.  I had a HUGE Chicken Paprikash with Pierogies, and I probably could have eaten a whole second helping it was so good.

Driving from the Tremont area to my hotel across town, I passed the Quicken Loans arena, Progressive Field and down historic Euclid and Carnegie streets before seeing the grand dame that is the Cleveland Clinic.  It’s impressive, but it’s also a hospital, so I try to make it a rule not to have to visit those on vacation.  After a quick respite at my hotel, it was time to head to the show.

FirstEnergy Stadium is where the Cleveland Browns play, and it sits right at the edge of Lake Erie.  The Stadium itself is newish, has bright orange seats and is fairly easy to navigate (although to get to field level, you can only come from the east side).  I couldn’t surmise where fans would actually tailgate for a game, but I assume there’s nearby parking.  The most striking feature is located right next to the stadium: the Rock and Roll Hall of Fame, an onyx pyramid filled with everything that matters to this music maniac.  But more on that later.

I had heard from friends that it tends to rain in the evenings in Cleveland, with mercurial thunderstorms, but miraculously, the band stayed dry (I’m sure Bono bargained a pact with the sky–if you want to kiss the sky, you better learn how to kneel).  Not ready to go straight to bed due to my concert high, I drove around Downtown a little while after the show past the City Hall and Playhouse Square (complete with a sparkling outdoor chandelier).  Tucking in at the IC, I had Anton Corbijn dreams of wide open desert scenes. 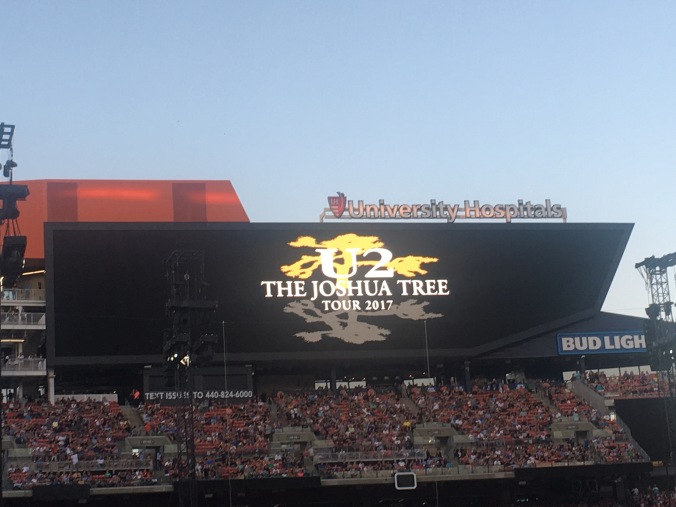 First thing I need in the morning is coffee, so I descended upon the Phoenix, a cozy coffee shop in the Cleveland Heights area.  I can see why this place is very popular with nearby students and medical professionals, it’s super hip and has a great roast.  This route allowed me to explore Forest Hill Park, a sprawling greenspace that used to be A PART of John D. Rockerfeller’s property.  Like a part of his backyard.  This just confirms that I should have been an oil magnate.

From there I made my way to Presti’s, a venerable bakery in the Little Italy neighborhood.  I stuffed my face with cookies and cannolis and it was AMAZING.  Don’t leave the cannolis, they are scrumptious.

As it was still earlier than the dawn of time, I explored University Circle around Case Western.  There’s so many museums but alas not enough time for me as I had one museum on my list for this trip.  Next time, I’ll be sure to hit up the Museum of Art, Natural History, Botanical Garden and Modern Art–all located in this convenient district.

But it was time for my singular destination: the Rock and Roll Hall of Fame.  This was a kind of pilgrimage for me, as obsessive a music fan as can exist.  I spent hours here and could have spent more, if not for my late afternoon flight.  There was regalia, costumes, handwritten lyrics, background stories, immersive media, shiny objects, instruments, history, show posters, and of course music. 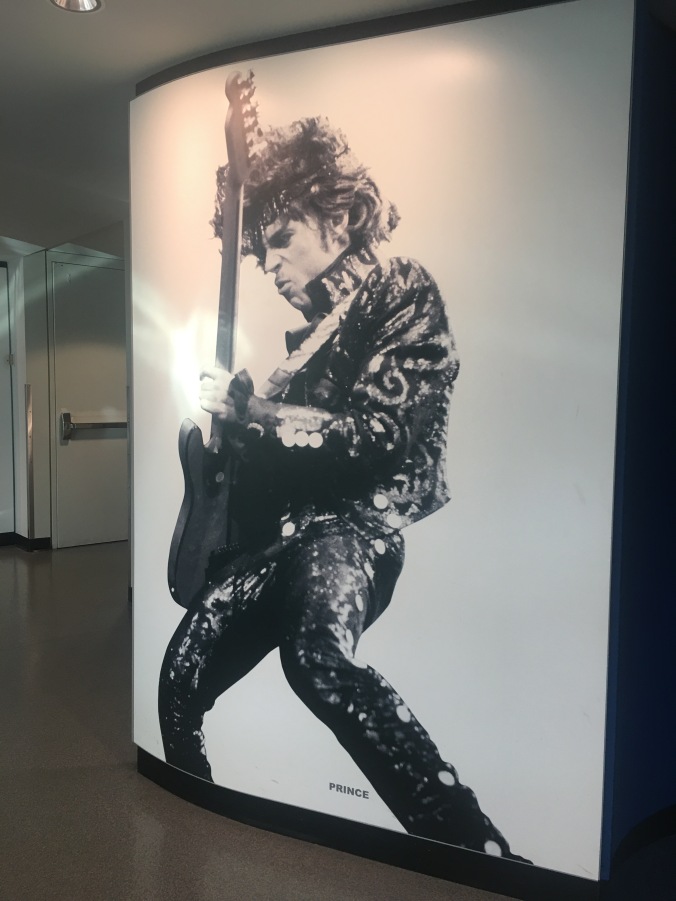 Before leaving in search of eats, I stopped to see one of Cleveland’s most interesting public works of art, Free Stamp in Willard Park.  A nod to the emancipation of slaves during the Civil War, it’s a giant rubber stamp designed by Claes Oldenburg and Coosje van Bruggen.  You may recognize their work from a previous post, they also designed Shuttlecocks at the Nelson Atkins Museum in Kansas City. 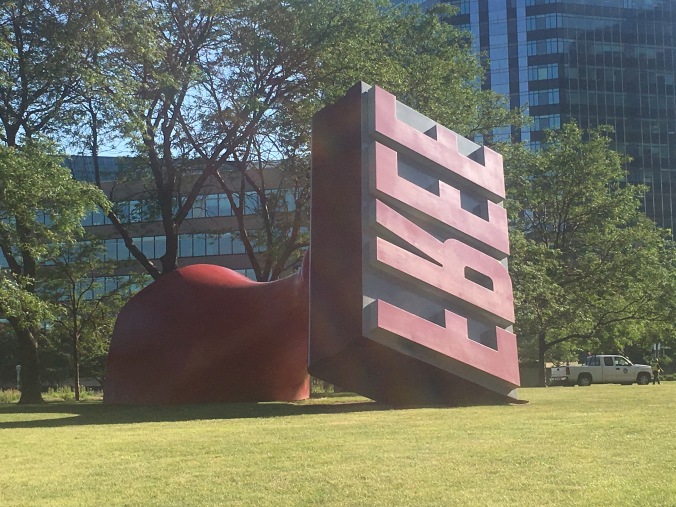 My final stop before leaving ‘the Cleve’ was West Side (westside!) Market.  A bustling farmer’s and food stall market is the best place to be on a Sunday, especially when located in such a gorgeous historical building.

Unfortunately it was Sunday, Bloody Sunday, so Steve’s famous gyro stall wasn’t open, but I found delicious encased meats that I gorged upon instead.  I also had a shawarma at nearby Boaz Cafe which fueled me for my flight out.

It was a short but sweet trip, and in Cleveland, I found exactly what I was looking for…

If you liked this guide, please share so others can see how Cleveland rocks!

One thought on “36 hours in Cleveland”