there is a house in new orleans, they call the rising sun

New Orleans has a certain je ne sais quoi about it.  It’s dark, seedy, mysterious, and a little bit dangerous.  And that’s the appeal, like someone you know you shouldn’t be attracted to, because with them, you  will make questionable choices.  In short, New Orleans is most relationships in your twenties, with the notable exception that you actually should keep going back.

The Crescent City has done an incredible job rebuilding after the devastation of Hurricane Katrina in 2005, demonstrating the irrepressible spirit of its people.  There is so much pride in the preservation of their city, their traditions, their culture and as a visitor it is so easy to be seduced by the magic that envelopes you when you arrive.

I recently had the chance to spend three days there, but that’s never enough.  The air is just different, there’s some mystical voodoo that grabs a hold of your soul and doesn’t let go.  The Big Easy, she stays with you, long after you’ve left her.  For she knows, it’s just a matter of time until the next rendezvous.

I arrived at Louis Armstrong International Airport (MSY) in the afternoon and instead of renting a car, I opted to use rideshare instead.  If you’re staying in the French Quarter, it is extremely walkable.  New Orleans also has a convenient and historical line of streetcars that will take you from one end of the city to another, so you don’t really need a car to get around.

After checking into the Omni (which is the perfect location by the way), I set out to explore the French Quarter.  New Orleans is one of the few places in the US that mentally transports you to a French colonized isle in the 1720s.  Like, you expect Johnny Depp to come ambling up beside you on the cobblestone streets as Jack Sparrow.  It’s got old world charm with flickering lanterns, gorgeous Creole style buildings with balconies, festoons in purple, gold and green, and street ragamuffins.  Jackson Square, a plaza commemorating Battle of New Orleans victor, Andrew Jackson, overlooks the Mississippi on its south side, and is filled with painters and horse drawn carriages and the saccharine odor of fresh pralines.

I love cities in which you can just meander without having any set destination.  St. Louis, Chartes, Royal, Decatur, you lose your sense of time when there’s so much to see along these streets.

Bourbon Street was already starting to fill with tourists when I popped into Johnny’s Po Boys for one of the shrimp variety.  Po Boys are just textural wonders: soft dough combined with the crunch of fried shrimp and the crisp of lettuce bathed in the smooth creaminess of mayonnaise? New Orleans wins on this alone.

I chose my hotel because of its nearness, yet far-ness from Bourbon Street, but a pleasant surprise was the rooftop observation deck.  Viewing the city from my perch high above was the perfect ending to my first day. 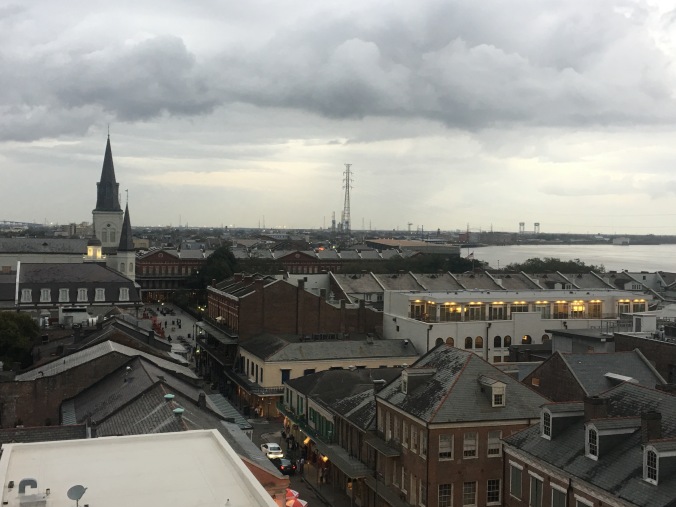 New Orleans is known for a lot of things, but their firm place as a foodie heaven is tops. There are many well established eateries in the French Quarter: Antoine’s, Galatoire’s, and Brennan’s, where I chose to enjoy my petit dejeuner. 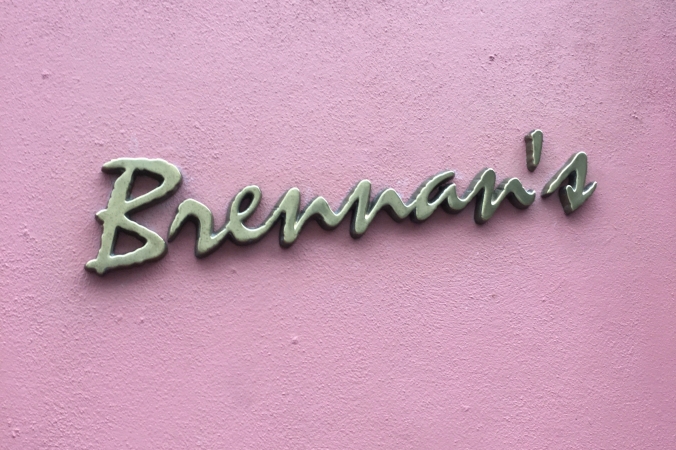 Brennan’s is my interior design wonderland.  It is located in the cutest pink building, with green foliage accents throughout the dining room and patio.  If I could have a house decked out in greens and pinks I would.  I should have been an heiress.

One of the older restaurants in town, their claim to fame is that Bananas Foster was invented there.  And you just know any place that creates a flaming dessert has to be totally lit.  I devoured the Creole classic, turtle soup, along with Eggs Hussarde.  Turtle Soup is the best soup I’ve ever eaten, no joke.  It’s salty, rich and provides you with more turtle power than any pizza slice could.

Energized from my way too big breakfast, I backtracked my steps from the afternoon before to see the French Quarter in a different light…the harsh light of day.  Like its human counterparts, Bourbon street looks a little rough in the morning, and I love it.

As the workers diligently spray the vomit off the streets and the garbage trucks dispose of the many bins of alcoholic vessels, there’s something so peaceful and sobering about being there after you know so much debauchery had happened there just hours before.

After I’d had enough of bleach cleaner smell, I walked a few short blocks to wait for the St. Charles streetcar.  It’s the oldest streetcar line in the world and it literally has stops to everywhere you want to go.  I bought a Jazzy day pass for $3, unlimited rides!

My first stop was Lafayette cemetery, where I met up with Free Tours on Foot.  If there are any free walking tours available in any city I visit, I try to seek them out. They are a great way to explore by actually getting on the street instead of a tourbus.  This tour covered the famed Garden District of Victorian homes as well. 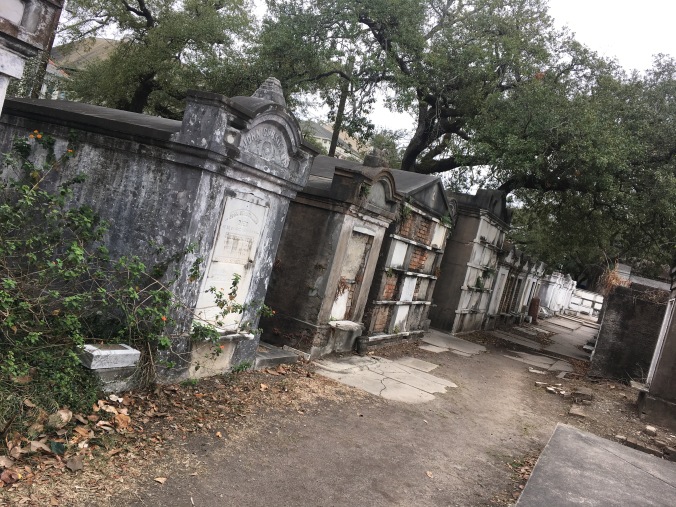 I love an old cemetery, especially ones with above ground family tombs.  Learning about the different burial practices is especially interesting from a historical standpoint.

The tour also took us past Commander’s Palace, the famed New Orleans institution which sits right across from this landmark (also owned by Brennan family).

I really enjoyed walking through the Garden District neighborhoods and seeing the grand homes, especially the house that “Head like a Hole” bought.  You go, Trent Reznor.

The boulevards in this city are wide and tree-lined and are ideal for an early afternoon stroll.  Magazine Street is a trendy area with restaurants and boutiques, and I stopped for a King Cake tart at Sucre, a local chain of confectionary delights.  I literally then rode the streetcar along its entire line twice–marveling at the Audubon homes, seeing Mardi Gras buses pass, and then getting a feel of the neighborhoods where real people live.

On my second trip back, I stopped to visit the World War II museum.  It’s modern, easy to follow, well designed with a lot of military aircraft and tanks.  It’s a spectacular museum.

By this time, I’d worked up quite an appetite, so just down the road is Cochon, New Orlean’s ode to everything Piggy.  It is here where the saying you are what you eat came true, as I thoroughly enjoyed a “Le Pig Mac.”  I became it, it became me.  It’s basically a Big Mac made with pork sausage.  It is as devastatingly good as you would imagine.

Of course, after eating it, I had to walk around for another few hours to escape the meat sweats, so Lafayette Square and the shops at Canal Place (both with convenient stops along the streetcar route) helped me with that goal.

Despite the pig shaped rock in my gut, I still made it a point to retreat to Napoleon House for a Pimm’s Cup, an English drink popularized there in the 1940s.  The building is dark, broken in, and simply magnificent–it was supposed to be a refuge for the short emperor himself, but he died before he could get there.  It’s a place where you feel like you’re Ernest Hemingway or Henri Toulouse-Lautrec or something.  C’est pour les artistes et les amoureux.

Waking up extra early on my last day, I darted to the world famous Cafe du Monde at sunrise to beat the rush.  I inhaled three beignets and an iced chicory coffee, it’s easy to do, they’re pillows of fried goodness that melt in your mouth. 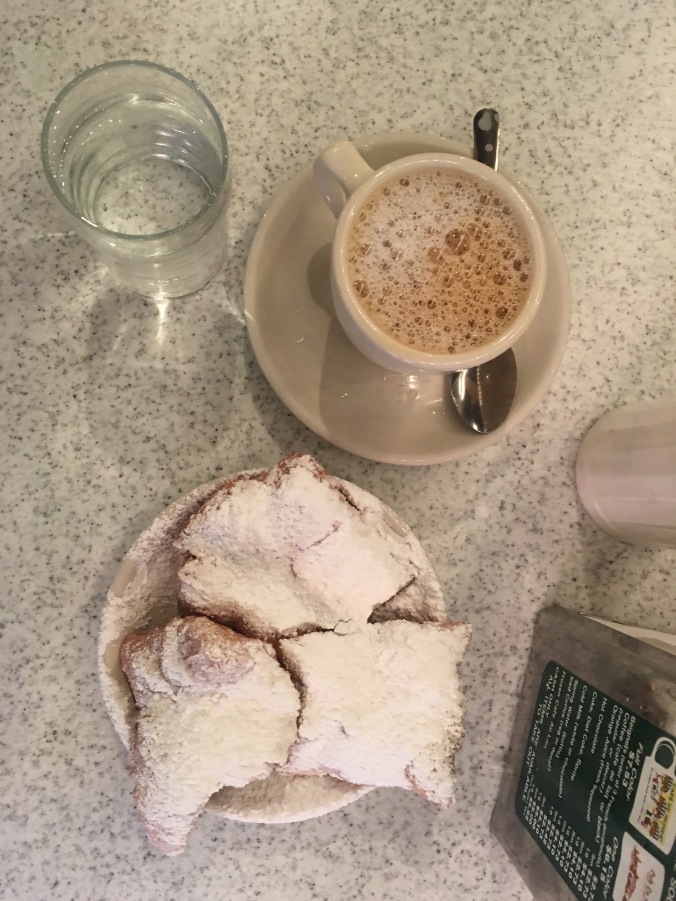 It was there in that cafe, with the Vietnamese servers atwitter around me, watching the sunrise over St. Louis cathedral, that I realized that it would be so bad for me to live here.  It would be real life Ms. Pacman, I’d look and act like her, all round and eating everything in sight and running amok with ghosts chasing her.  This is literally the perfect metaphor for this town.

As I contemplated life and its intricacies while discovering the trinkets in the French Market, there was one last thing I had to check off my list: getting a muffaletta at Central Grocery.

Armed with this very fragrant sandwich filled with olive tapenade goodness, I ubered back to the airport, where the most New Orleans thing could have happened to me: I saw Lil’ Wayne.  The absolute perfect cap to my stay in the Big Easy.

Famous entities: Smoothie King, Cash Money Records (takin over in the 99 for 2000)

One thought on “3 days in New Orleans”