If a city has that many nicknames, than there must be personality traits to match. Detroit sometimes gets a bad rep, but it’s a historically rich city with a lot of culture and pride.  It is a true, All-American City, in its industrial roots, perseverance, endurance and melting pot status.  I was only able to spend a weekend here, and honestly it wasn’t enough time to see everything I wanted to see (namely the Red Wings, Henry Ford Museum, Shatila bakery, Motown Museum, Meg White, and Ann Arbor).  More of a reason to go back one day…

detroit, you really got a hold on me*

I took a redeye and landed before the dawn of time, so I waited for a little while in DET for my friends to pick me up.  I love the Delta Terminal of this airport.  It’ll have to be an airport review post one day, but it’s sleek, modern and has so many coffee options.

Speaking of coffee, my friends know where my head’s at when I arrive at a destination, so they took me to Germack Roasting Company near the Eastern Market to perk me up.  Then we set out to enjoy the Saturday market in the area.  It’s an expansive farmer’s market with many outlying buildings with murals and specialty shops abound. 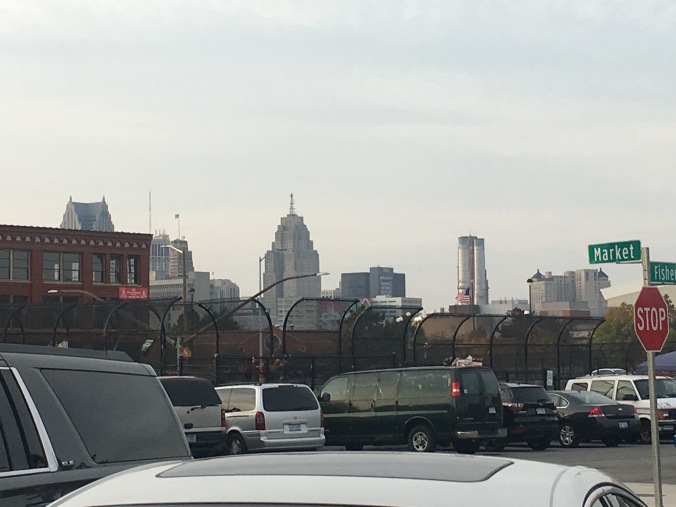 A stone’s throw away is Detroit’s Downtown.  The thing I love about this city is that all of their sports arenas/stadiums are downtown.  We drove past Ford Field (and the MGM casino) to get to the Dime Store, where I thoroughly enjoyed the hell of out of a Philly cheese eggs benedict for brunch.

Driving through the city, through the 8 mile area showed the less shiny Detroit.   It serves as an important reminder of how times can change once thriving urban areas into forgotten communities in need of repair.  I think in a few years this city will be revitalized and ideas and concepts will once again flow out like it did once before. There’s too many creative people here who love this city and want to see it return to its glory days again.

We spent the afternoon walking around Royal Oak; Detroit suburbs are all very nice.  There are a ton of bars, chain and mom and pop restaurants, souvenir shops, cafes, and theaters.  Randomly, in my life I’ve known a bunch of people from this town, and they all loved growing up here.  It does seem very idyllic American suburb, like something you’d see in a Tim Allen sitcom.

Before enjoying a show at the Royal Oak theater, we dined at Vinsetta’s Garage.  This is American modern cuisine at its best–located in an old service garage.  They have something called a noodle burger, which is basically burger mac and cheese served in a cast iron.  I ate the crap out of it.  Their tikka fries were amazing, too. 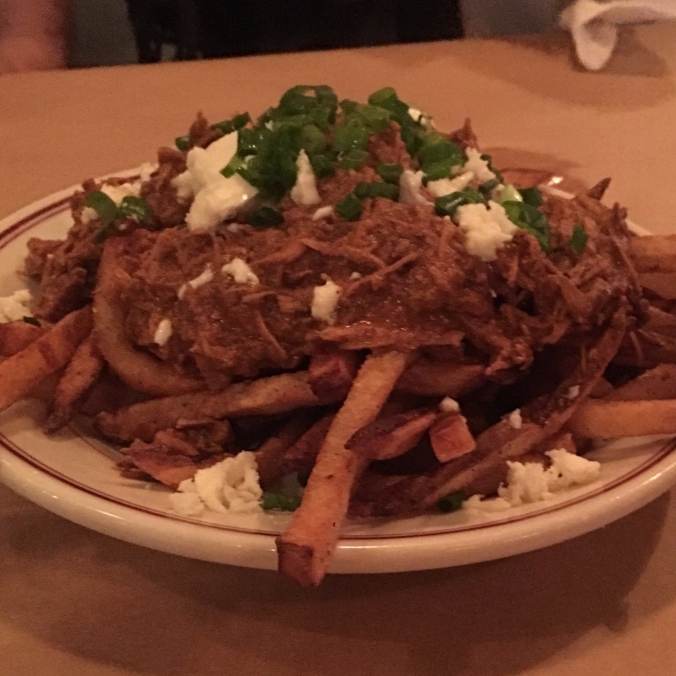 not mom’s spaghetti, but it’ll do

We ventured out to another suburb, Birmingham.  Talk about Norman Rockwell.  So quintessentially American, so suburban.  Apparently a lot of professional athletes live out here, and you can see the upscale influence of the neighborhood spilling into their downtown quaint shopping area.  It’s ritzy.  Commonwealth coffee is a hipster coffee shop with a setting straight out of LA with its fig leaves and live edge wooden tables.  Their chai latte is tops.

Every good city need an excellent diner, and Royal Oak has O.W.L. (Open Way Late).  This is a Mexican infused diner that had AMAZING breakfast sandos.  Man, I wish I had one now (looks up flights to Detroit). 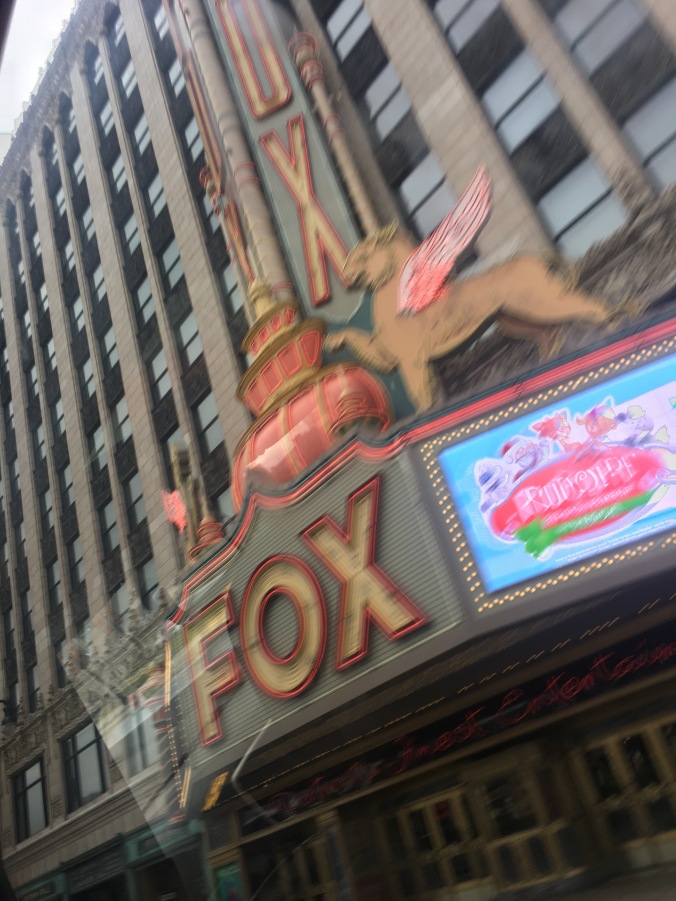 Finally we got some sunshine on a cloudy day for my last few hours as they took me downtown past the Tigers’ Stadium, Fox Theater, and Little Caesar’s Arena towards Hart Plaza.

Something that really makes a great city are their public art displays and sculptures. Detroit has many of these, with the most notable works being “The Fist” dedicated to Joe Louis (and the metaphoric rise of American power during World War II) and “The Spirit of Detroit.” 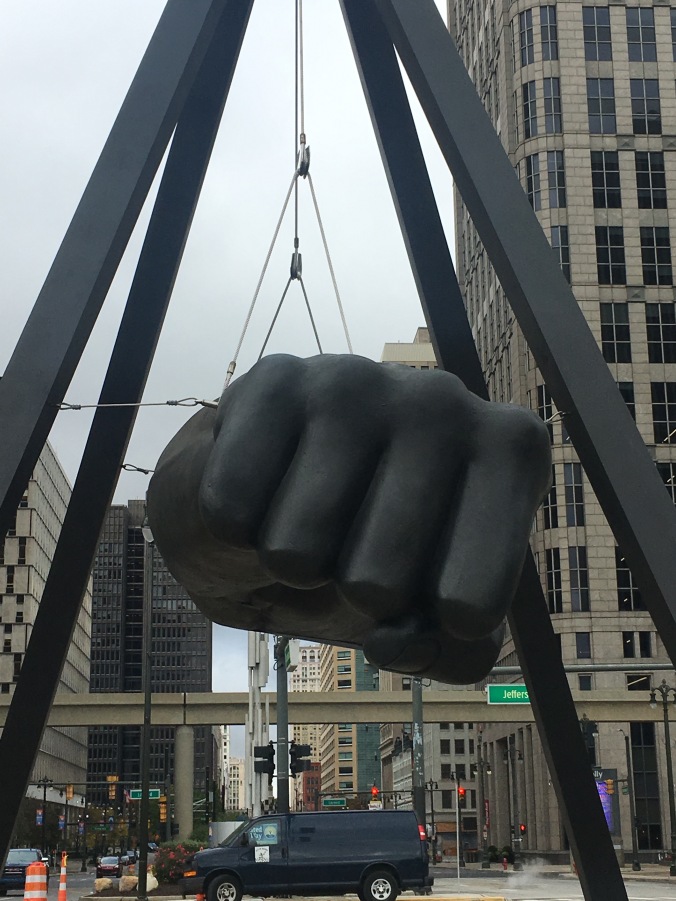 packs a punch, doesn’t it?

Just over the water lies the enchanting, mystical land of Canada, and you can see a bunch of casinos along the shore.

gateway to freedom figures looking over to canada

Walking along the riverbank, you can’t help but notice the GM building looming over the city, a reminder of the auto industry’s roots here. 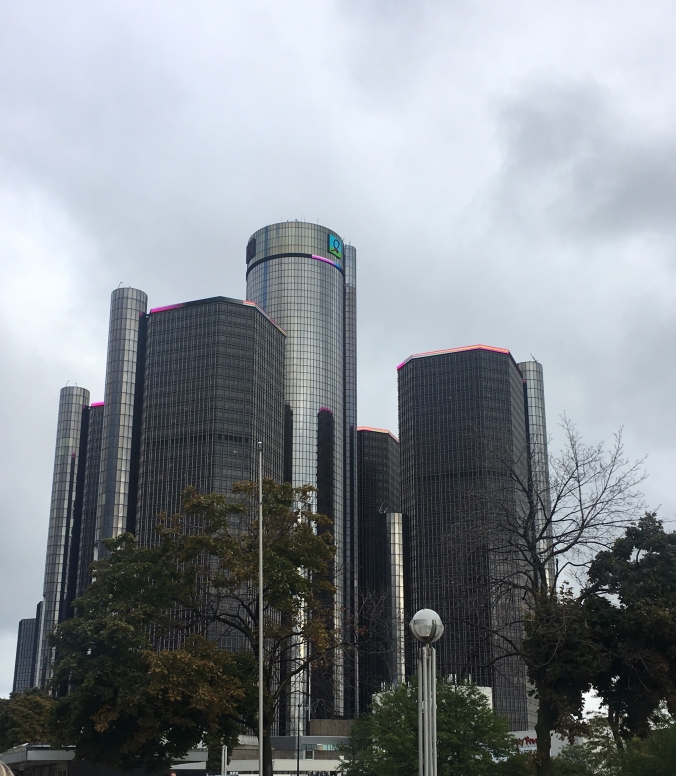 *if anyone is interested in a kickass Motown playlist, hit us up on the comments; you’ll ask what’s going on and then we’ll get you dancing in the street.

One thought on “36 hours in Detroit”