Growing up in Southern California, I spent some time in Los Angeles, but never actually lived there.  So, that makes me a total tourist whenever I come to town, and I love it.

LA is a very polarizing town.  I know a lot of people who absolutely abhor it, but you really have to know the city to love it.  There has to be a reason why so many people pack up and move out west to try and make their dreams come true, right?

Despite its magic, there is a certain seediness to it, like what Guns N Roses refers to about the jungle.  This is what happens when those dreams don’t get realized.  There is an underbelly to opulence and we all know that Hollywood is not the cleanest of industries.  And then there’s the traffic which is the worst, no disputing it.

But look beyond the surface and see the culture that is all around you.  From Olvera street to Little Tokyo, Korea Town to Little Armenia, this city is a melting pot of ethnicities.  The different areas and neighborhoods may make it seem disjointed, but it’s all connected in the living organism that is LA.

Most people who dislike LA have a bad experience from the get go, when landing in LAX.  This is understandable as LAX is the 8th portal of hell.  Especially on Friday afternoon.  If you can, fly into anywhere else.  But, the view from above on a clear day is spectacular, and you can even see the Hollywood sign if you’re flying from the north. 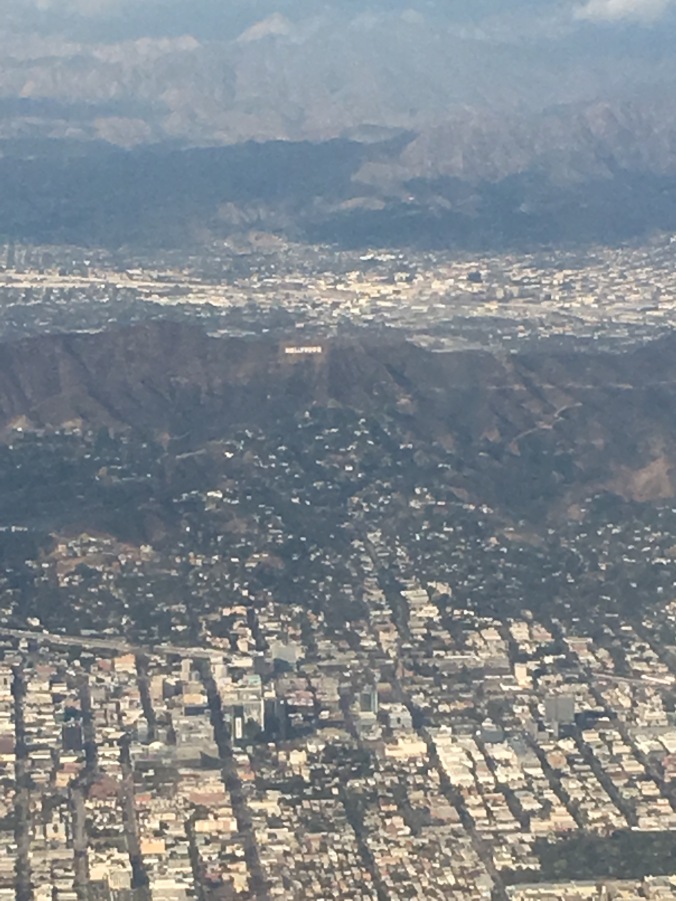 You will get stuck in traffic.  This is an inevitability of life in LA.  Just relax, meditate.  You will get to where you’re going, I promise.

Downtown LA is an interesting place.  The jewelry district, flower mart, Santee Alley, they really give the city the feel of a different country, with all the different vendors hawking wares and being a little shady while doing it.  There’s so many hip eateries and in Grand Central, you can find Eggslut and Valerie Confections.  Right smack dab in the middle of everything is the Staples Center, home of the Lakers, Clippers and Kings.  This is also where I saw Kareem Abdul-Jabbar on the street.

Pershing Square at this time of year is wonderful because the skating rink is open.  Skate in 70 degree weather, it’s grand. 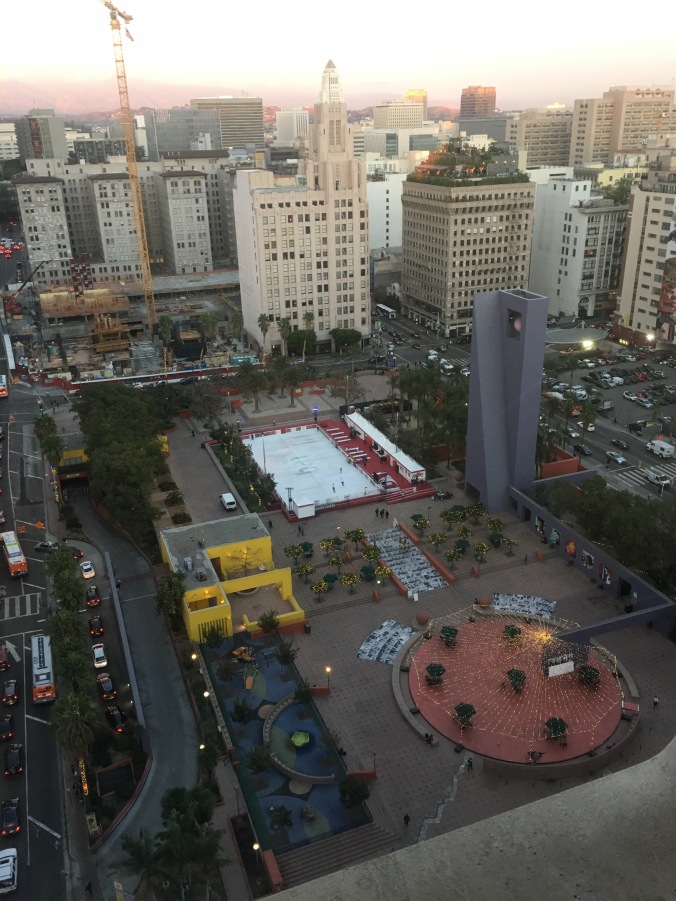 Head to happening Little Tokyo, where Daikokuya Ramen will always have a line and old school mainstays like Curry House will dish up Japanese comfort food that will warm your soul.

Stay up late, you’re only young once!  I can’t help you here because I’m old and I like to retire early, but you’re in the city of stars, so maybe head to the movies.  The Arclight in Hollywood or Cinefamily?  Or go clubbing (do people still go clubbing?  This is how old I am, I’m not even sure it’s a thing anymore).  Catching shows at any of LA’s famous music venues: the Hollywood Bowl, Roxy, Whiskey, Troubadour, Hotel Cafe, El Rey, etc would also be a classic cap to a fantastic LA night.

Los Angeles is known for its brunches.  Hipsters love brunch.  And LA has a lot of hipsters. So, you can do the math.  Sqirl is hotspot for healthy, innovative breakfast fare.  I mean, they have like chicken porridge, danish rye toast and whitefish tartine.  Crispy rice “salad” is an umami bomb.  The menu is all over the place but it works.

After fueling up, you’re going to want to work it off and a hike is a great way to do that.  There’s so many places to do so, Topanga Canyon, Temescal Canyon, Mt. Baldy, etc.  To get a classic view of LA, you can take the hike to the Hollywood Sign, which starts up in Griffith Park.  This iconic feature was erected in 1923 to advertise a housing development, but it persisted before being made an official landmark.   The easy hike to the back of the sign is about 6 miles roundtrip, and on a beautiful day, you’ll have a view of the city that can’t be beat.

Just visiting the Griffith Observatory is splendid on its own.  There’s a tesla coil, solar telescopes and a Foucault pendulum.  And again, a sweeping view shown above.

And stars, city of stars.  Make sure you visit the statue of James Dean, erected to commemorate the actor who famously filmed Rebel Without a Cause at the site.

even his statue has perfect hair

And then you can pretend you’re Emma Stone or Ryan Gosling while looking at the Hollywood sign from the vantage point in the observatory’s cafe.

You’ve probably worked up a little bit of an appetite, so you deserve a snack.  Koreatown has one of the area’s beloved donut shops, California Donuts.  There’s panda, unicorn and a veritable amount of cereal, girl scout cookie and even a Homer Simpson inspired one. 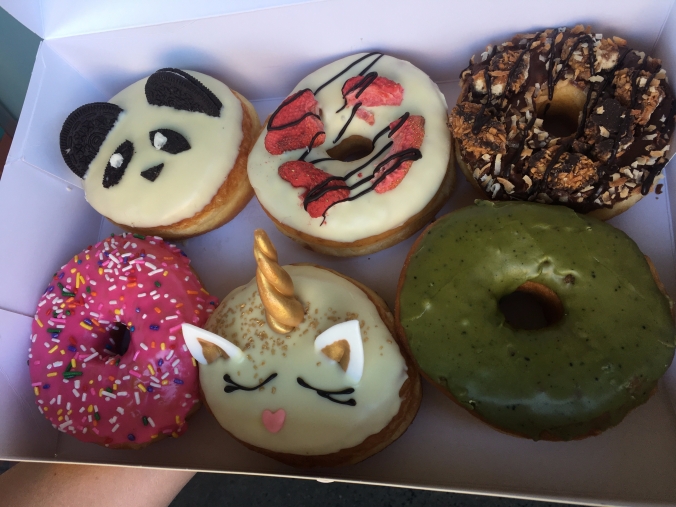 Stick around K-town for pampering at the famed Korean Spas (Wi or Olympic) or go shopping!  Head to the Hills, Beverly that is, to visit touristy and crowded Rodeo.  Or go to the crowded and touristy Grove district.

i’m dreaming of a 70 degree christmas, just like the ones i used to know

I love the Grove because it is next to LA’s Original Farmer’s Market (fun fact: Gilmore Girls was named after the family that started this market).  There’s so much good grub in the market, from Mediterranean to Italian to Chinese.  Then grab some decidedly upper class pastries from Laduree or the new Dominique Ansel in the Grove proper.  It is the best place to people watch.

Keep the tour of Asia going and head to Chinatown.  This is an area of somewhat ill repute, and is sort of forlorn and forgotten, but there’s still good eats and sweet architectural detail.  Yang Chow is an old reliable (always a crowd outside), newer eateries like Roy Choi’s Chego or Eddie Huang’s Baohaus also inhabit a shady building, just as you would expect.  Many, many movies have been shot in C-town, the lanterns that light up the sky are delightful. 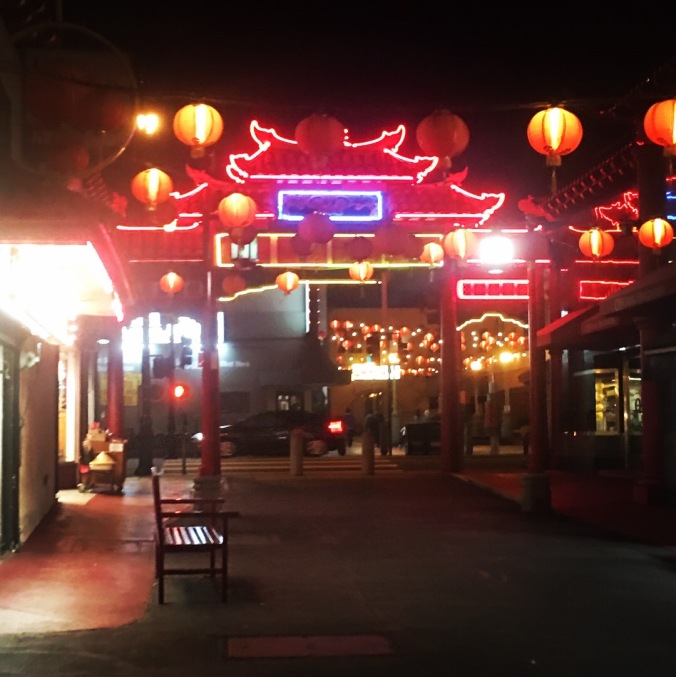 LA is also known for its kitsch, and recently nothing has been as kitschy as the Museum of Ice Cream. This limited run “museum” is a celebration of creativity and pop art.

Life’s short, take a swim in the sprinkle pool.  Just don’t think about how a ton of people have gone swimming in it before you like I did.

Late night eats down the street from the MOIC include Church and State, Bestia (get your wallets ready) and Pizzanista, home to very good pies.  Did not see the macaroni and cheese pie, but the Meat Jesus is something worth worshipping. 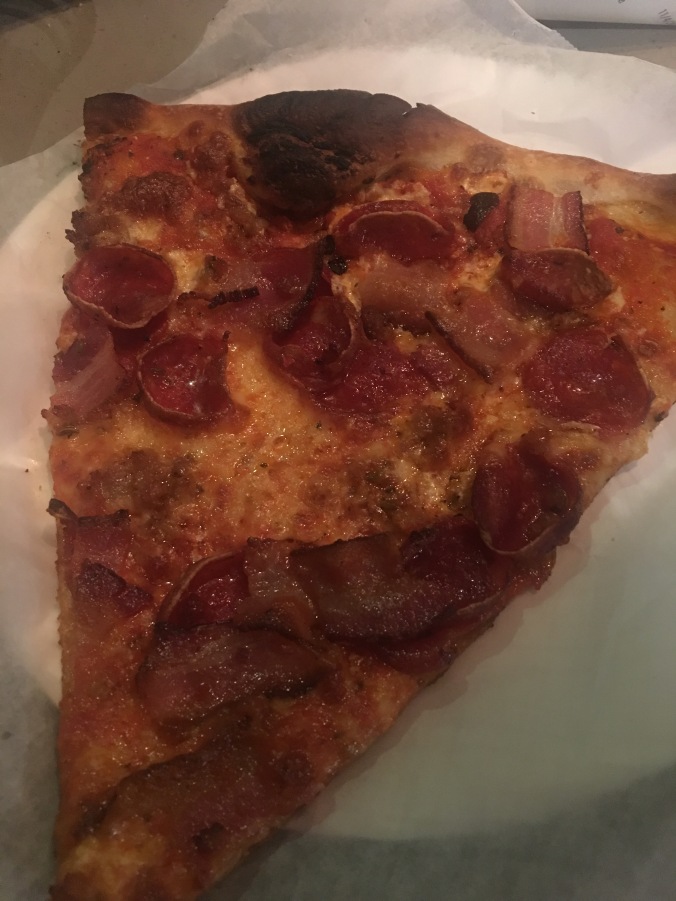 Next day, hang in the suburbs, Pasadena is where my sister lives and so we usually kick around there.  Flocks of Los Angelenos head to Lucky Boy to cure their hangovers with one of the massive griddled burritos.  They are enormous and tasty.

The Huntington Library and Botanical Gardens is the perfect place to retreat for a relaxing day, and it sits at the heart of Pasadena, also home to the Rose Bowl and Rose Parade (these will be later posts).

Look at art, including the second most famous portrait in the world, Blue Boy, and the Calder work above.  Stroll in the vast gardens.  Rest on the patio of their cafe with an agua fresca or iced tea. 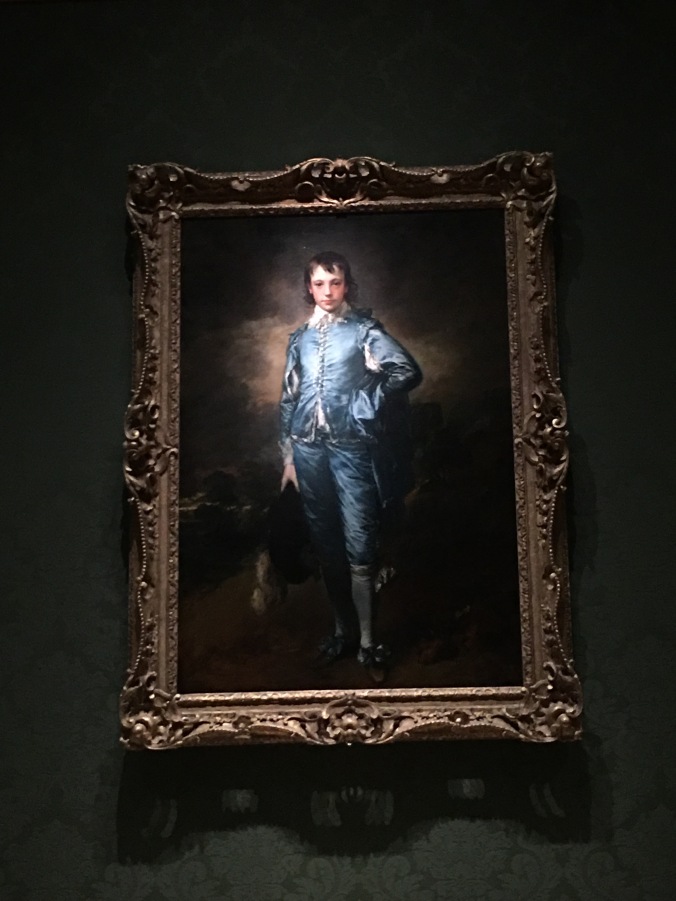 why so blue, boy?

Find your zen in the appropriately named garden.

Be one with nature, like this squirrel in the Chinese garden.

Head to Old Town Pasadena or Paseo Colorado for lunch, perhaps Urth Caffe or Tatsunoya.  LA has the best ramen, you just have to wait in line for it.

If you’re feeling like some Chinese, you’ll want to head to Alhambra or Arcadia.  There’s a location for the venerable chain, Din Tai Fung, in the Santa Anita mall, and it’s worth seeing what the fuss is about at this Michelin starred chain.  Shao Long Bao is, of course, what they’re known for, but honestly, their fried rice, vegetarian dumplings, and veggies are wok seared perfection.

There are a million things to see and eat in LA (Roscoe’s! Pinks! Apple Pan! Diddy Riese! Kogi!) and it is really dependent on where you’re located, because really, you have to pick a spot and stick to it.  It’s not feasible to drive all over the place because you’ll go crazy with the traffic.  I mean, we didn’t even go to the beach during this trip, so you know I’ll have to write about that sometime soon.  Luckily I visit my family a lot including this weekend for the holiday.

Happy Thanksgiving to you and your families!

One thought on “weekend in la la land”