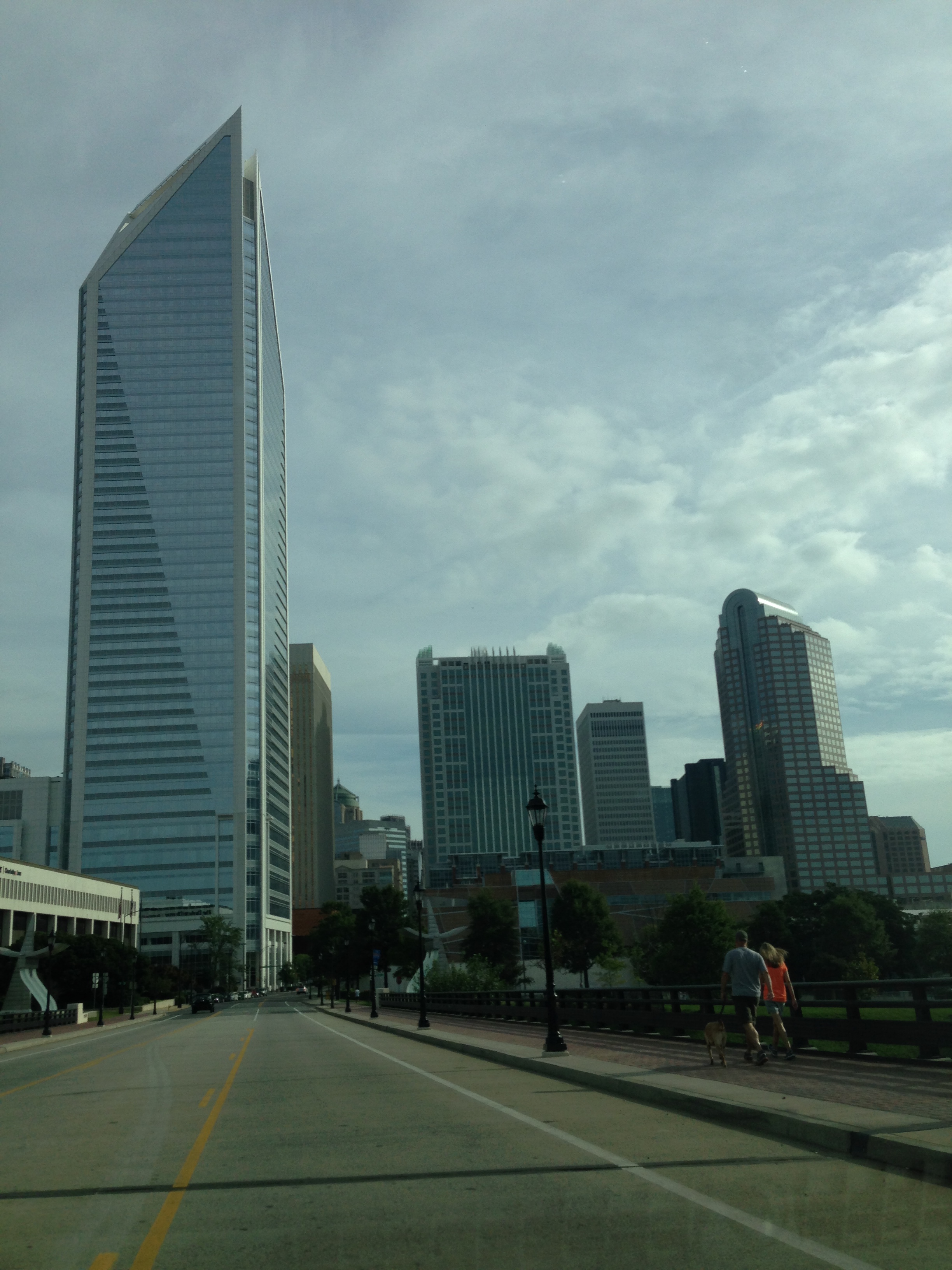 Charlotte, North Carolina is one of the country’s financial centers which draws in a lot of young professionals and individuals with money.  With a growing population, the demand for restaurants, attractions and entertainment rises, and the city has stepped up.  It honestly does not feel like much of a Southern city, other than its hospitality, the downtown feels like mini Wall Street with its city of skyscrapers.

The cool thing about this city is that there’s a real sense of humor about it. There’s quotes all around town, and whimsical public art displays.  Not what you might expect from a city that boasts the Nascar Hall of Fame.  The unexpected it what makes this city so special, and a great place to spend a short weekend.

I visited Charlotte for a concert and was struck by all of the big name financial institutions.  Wells Fargo, Bank of America, they all have multiple huge high rises.

As in large downtowns, there’s green spaces scattered throughout.  There’s little quotes and humorous ads dispersed through town like the one on this bench:

Even the library gets into it:

Because of the proximity to many of these financial institutions, downtown is full of high end hotels.  The Ritz Carlton, Omni, the Dunhill are all basically on the same block.  This is located next to where the Charlotte Hornets nest. There’s also a speakeasy called prohibition, which again is very tongue-in-cheek.

Since I was on a time crunch, I picked up a really quick dinner on Elizabeth street, a cute area lined with hip eateries and bike shops.  This city does seem very young, so there’s a lot of families out and about.  It’s actually pretty nice in that way.

Viva Chicken is a Peruvian fast casual chain known for its rotisserie chicken.  The 1/4 bird with two sides — arroz and yuca totally hit the spot after a long day of traveling.  It was light, the flavors were on target and the green sauce has just enough spice.

I only had a limited amount of time to actually see the city the next day before my flight, so I drove around the downtown.  A mix of old Southern and new Gordon Gecko, there’s lots of varying styles of architecture including the neoclassical style of the Old First Baptist Church above and the postmodern Hearst Tower.

There’s a really rich literary component in this town, starting with the Green which is a large park that has a bookish theme.  There are signs pointing to places that make up famous author’s names such as Samuel Clemens’ pen name: 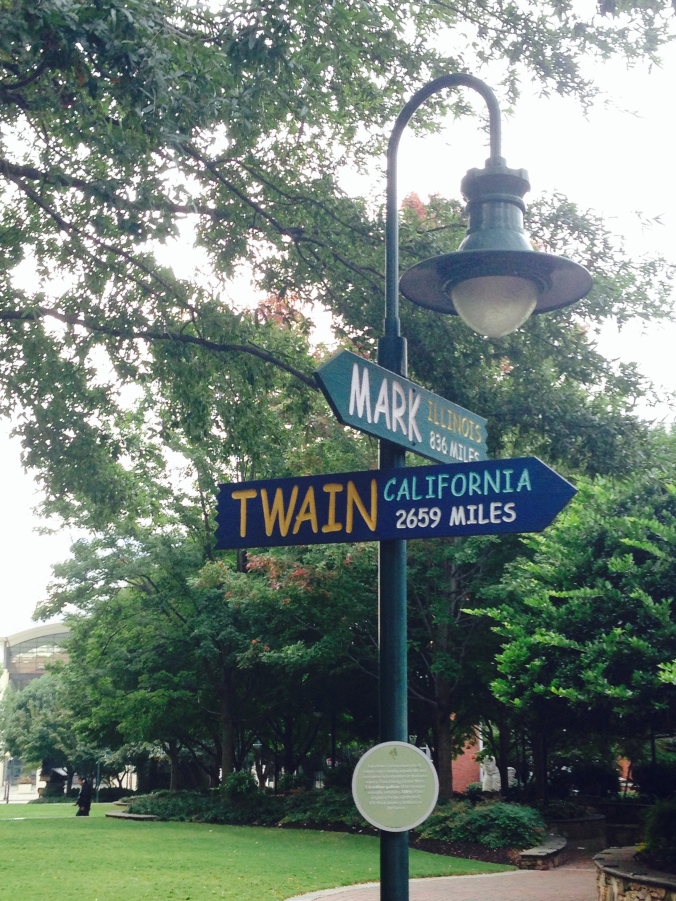 This park is lined by the Modern Art Museum and the Charlotte convention center.  It features sculptural elements including these two stacks of books of varying genres, from Alex Haley’s Roots to Oedipus Rex.  I guess you could call it a real Oedipal complex.

Driving around this area you cannot help but notice the humongous structure that is the Nascar Hall of Fame.  I would’ve liked to visit, but did not make it to the finish line.

I did lap it a few times though looking for that checkered flag.  Start your engines. 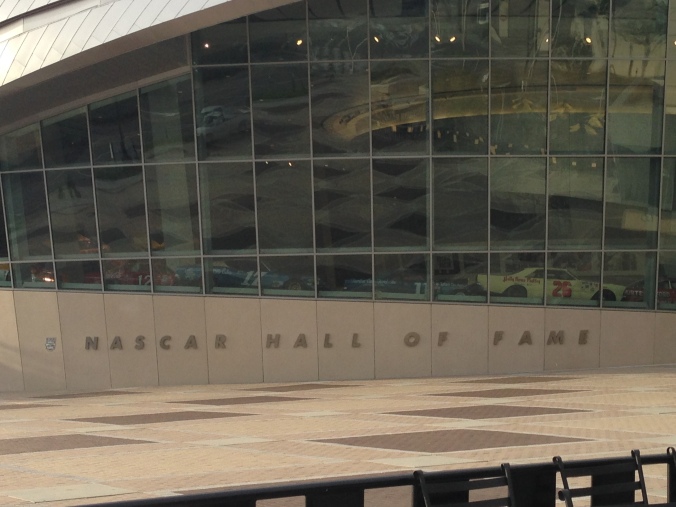 You’ll also pass Bank of America stadium the den of the Carolina Panthers.

And what was the most notable landmark to me, the Chiquita Banana building.  Who knew it was headquartered in Charlotte?  That sh*t is B-A-N-A-N-A-S.

Before I left town, I had to go to South Park, for obvious reasons.  This is the straight up bougey burbs of Charlotte.  It’s the kind of place where you’ll find an Anthropologie located near a Fidelity Investments.  Stewart Penick’s Terrace is located in the very ritzy Piedmont Town Center, an outdoor shopping center with a lot of elevated casual restaurants–think brasseries and boulangeries.  It’s a popular place for brunch, and features red velvet waffles.  Doesn’t get more southern than that.  It was the perfect way to end a quick trip to Charlotte.

going down to south park gonna have myself a time