I think I’m going to Boston, I think I’ll start a new life.  So are the lyrics of the Augustana hit from the early 2000s that fill my head every time I go here.  It’s a great city for new starts and rejuvenations, being both young and vibrant whilst steeped in history and tradition.

One if by land, two if by sea…

Boston is one of the most historic cities in the US, where Paul Revere made his famous ride, where the revolutionists had the most famous tea party ever, where a man named Big Papi stole our hearts.  Because it is one of the oldest cities in the country, Beantown is actually pretty small and easily manageable for a short trip.  The T metro system helps.

Because I have been here for work related visits, my choice to stay is at the Liberty Hotel in the West End.  This place is incredible, when else would you actually want to stay in a haunted prison?  Formerly Charles Street Jail, this great stone building was renovated into a cool boutique property in the 2000s. 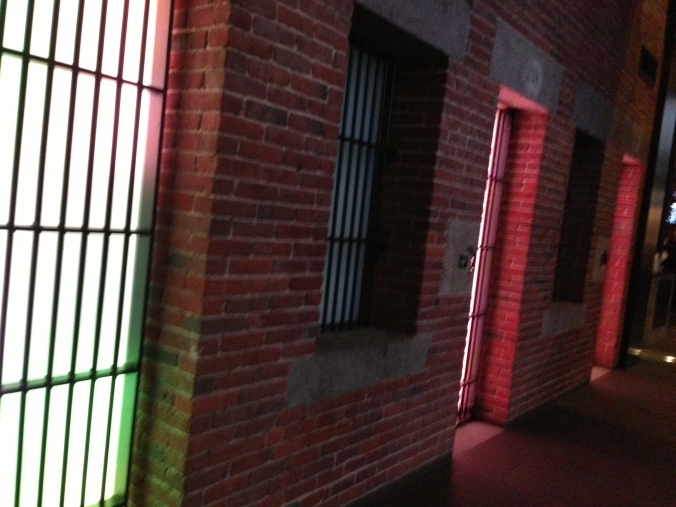 Be sure to grab a seat at the Alibi Room bar, where you can sip cocktails next to famous mugshots (Frank Sinatra), or grab dinner at Scampo, Lydia Shire’s homage to new Italiano cuisine (the lobster pizza is perfection).

This hotel in nestled between MGH and Mass Eye & Ear, and is walking distance to the MGH T station, so you can get anywhere quickly.  It’s a little less touristy than hotels in the Back Bay area also.

If you’re up for a walk, stroll along the river down Charles Street before gawking at the homes in Beacon Hill, including one owned by Robert Frost when he taught at Harvard.

You didn’t think I forgot about food, did you? Ye have little faith.  You need to have a pizza at FIGS.  Todd English’s cozy pizzeria is wicked awesome.  Proscuitto & fig.

this monkey’s gone to heaven

In a post-prandial stupor, you’ll start out on your tour of the city, by passing the grand Massachusetts State House aka the state capitol building.

This is located across from Boston Common, the large centrally located park that has baseball fields and monuments and statues. At the far south end of the park lies Boylston Street, and there are two metro stations depending on where you are (Boylston or Arlington).  From here, you can catch the T to Copley Place (or even walk ~20 min) where an endless sprawl of restaurants and high end hoteliers awaits. Newbury Street is where all of your luxury shopping dreams will come true.  The Trinity Church, the Old South Church, the Public Library, Skywalk, Prudential Center and the Duck Boat tours, which you will see everywhere, are also located in this crowded area popular with tourists and locals alike.   If you’re ready for a snack (and you should always be ready for a snack), stop at Flour Bakery, a patisserie started by a former mathematics grad from Harvard.  It’s known for its ooey gooey sticky buns.  They got the formula right on this one.

Sorry, that joke may have been a miscalculation.

I’m here all day, folks.  Walk that pastry off for another 20 minutes or so and you’ll see the Big Green Monster of Fenway Park, a must see even if you’re not a fan of baseball.

For dinner, you need to have Italian food in the North End.  There are literally no bad spots, but Carmelina, Nico, Mamma Maria, and Prezza are recommended.  Remember, I love a good Italian peasant meal, so Prezza is awesome. Mike’s for cannolis marks a sweet end to your first day. 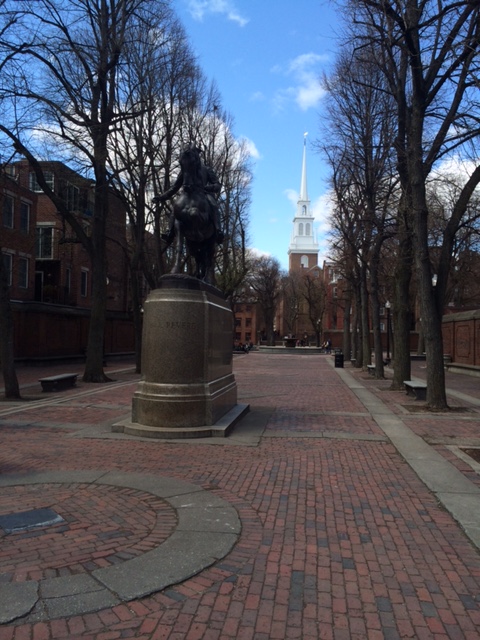 The next day, you’re going to do the Freedom Trail.  Like I said, I like to do touristy things once in every major city I visit, and this 2.5 mile trail has supreme historical value, so I’ve actually visited some of the sites multiple times.  What can I say, I’m a nerd.  Head back to Beacon Hill area for a light (yet caloric) breakfast at Tatte Bakery, a cafe serving not cheap European pastries.  Now you’ve already seen Boston Common and the Massachusetts State House, so maybe start your sojourn at Granary Burying Ground.  I love old cemeteries, and this one may have the remains of some of America’s most famous founding figures: Paul Revere, Samuel Adams, John Hancock.  Everyone takes pictures of PR or Benjamin Franklin’s parents grave sites, but my personal favorite is this one, of Benjamin Parker, a merchant who died in 1769.

Continuing the macabre theme of your trip, the Boston Massacre of 1770 site is up next.  This is actually a very profound clashes in American history, as it was one of the inciting events used to spur the call for Revolution.  The interesting thing is that the British soldiers were acquitted for their role in the massacre, by a defense team that was led by Patriot John Adams (who worked on their side to make sure the trial was deemed fair).

One of the oldest buildings in Boston, the Old State House was the former seat of colonial government.  You can’t miss it, it’s tiny and sticks out from its surrounding skyscraper neighbors. 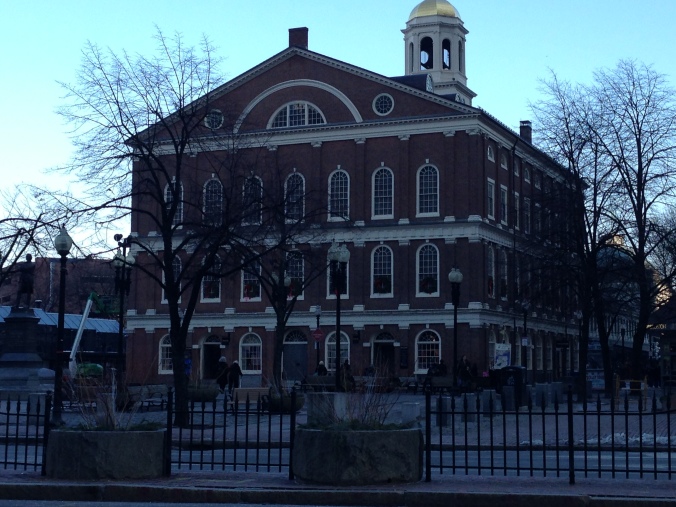 Sample some local fare at Faneuil Hall Marketplace/Quincy Market where the sights and smells of chowda and lobsta rolls will delight you.  Or if you want to be super Boston historied out, go to the Parker House (now an Omni Hotel) and have some PH rolls and Boston Creme Pie.

Continue on to see Revere House, the Old North Church and across the river to see the USS Constitution and Bunker Hill museum (free!).  Since you’re on this side, might as well eat at Pier 6 or Legal Oysteria because you can’t have enough seafood here.  I cannot reiterate how delicious it is here.  There must be something in the water…maybe the tea. 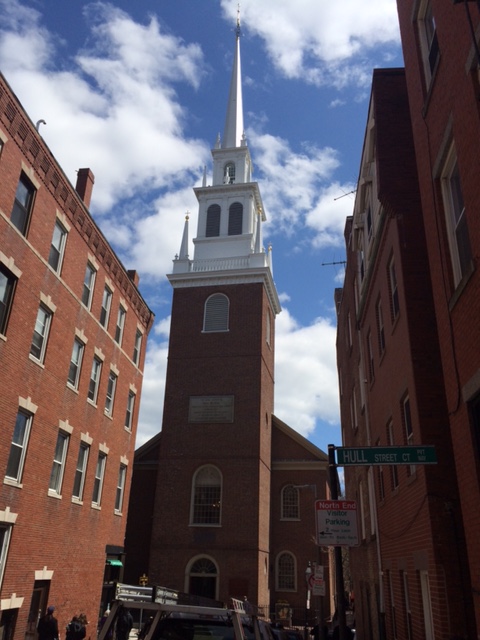 Cross back over the river and make your way towards the Boston Tea Party site and Museum; this is probably my all time favorite act of protest, so it should be celebrated.  Not too far from here is Chinatown.  It’s a much smaller scale than other Chinatowns, but just as seedy and filled with deliciousness, which is cool there’s that consistency.   The heart of the financial district/downtown is adjacent to the area.

If you have time, shoot over to Stuart Street and get a massage at Bliss in the W hotel.  I know it’s a chain, but I legitimately had one of the best massages of my life here–and I’ve had many.  It’s the perfect way to wind down after traipsing all over town. 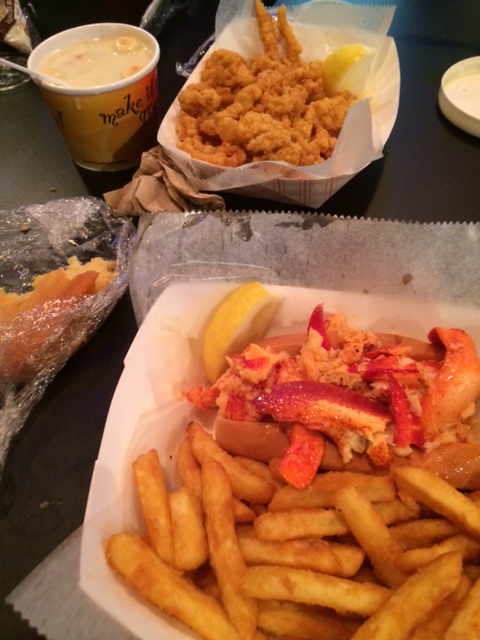 For dinner, I say more seafood, preferably somewhere along the harbor.  There are literally dozens of choices, from the famous Legal chain to Yankee Lobster (counter style yums seen above) to Barking Crab (crab smash with rocks!) to Neptune Oyster (fancy rock lobstah) to the Daily Catch (mangia on Italian seafood).  Literally a ton, for any budget.  While you’re in Boston, make sure you try some of their brews.  Harpoon Brewery is located next to Yankee Lobster, but of course there’s the mass market favorite Sam Adams and the famous Cheers bar in Beacon Hill (where everybody knows your name).

On your last morning, head across Longfellow Bridge into Cambridge, where you can park ya car at Harvard Yard, or at least soak in the culture around one of America’s most storied institutes of higher learning in Harvard Square.  Clover Food Lab, Crema Cafe are great places to pick up coffee and a bite nearby before you meander around the campus.

Do not miss the Widener Library, one of the great libraries of the world, probably the most (paul) revered University Library in the world (although I prefer the architecture of the Beinecke Yale Library, don’t @ me).  There’s original Shakespearean poetry, originals of Bronte, Dickens, and a Gutenberg Bible amongst its vast collection.

And also visit John Harvard before you go, but don’t rub his toe because that’s a myth that students do this for good luck.  Or do it, I didn’t rub his toe and I’m still on the waitlist, fingers crossed (it’s been ~ 15 years, you’d think they’d let me know by now).  This statue was sculpted by Daniel Chester French, who also created Abraham Lincoln Memorial Statue–notably they’re both seated.  See, you can’t say you don’t learn anything from us.