Happy Presidents’ Day! How better than to celebrate with some founding fathers: an oldie but goodie, 36 hours in Rapid City, South Dakota.

One of the first items I ever put on my bucket list when I was a kid was Mount Rushmore.  Growing up, it was ultimate symbol of our country, even more so than the individual monuments in Washington DC.  Even now to me as an adult, after seeing it in person, it still very stirring, very American, a grand memorial to our stalwart forefathers.  It’s certainly worth seeing once in your life, it’s beautiful country out there, with wide open spaces and plains as far as one can see.

Rapid City (RAP) is a small regional airport, despite being a gateway to one of the country’s most popular attractions and a large national park.  To start your weekender, I recommend renting a car and driving the 2 hours to Badlands National Park.  Due to time constraints on my trip, I was not able to experience the beauty of this national park, so I urge you to try to get there if you can.  I regret not getting there, maybe one day. 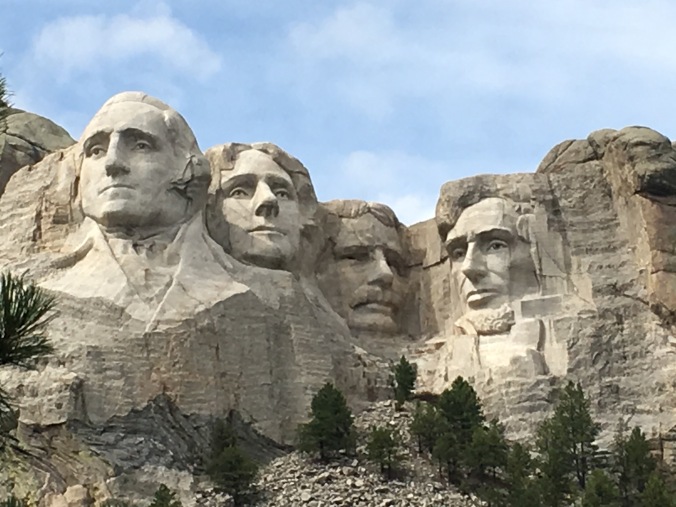 From there, head straight to Mount Rushmore.  It will be crowded, there will be a lot of people, but everything is fairly streamlined and runs very smoothly.  This ain’t their first rodeo, thousands of guests visit every day. 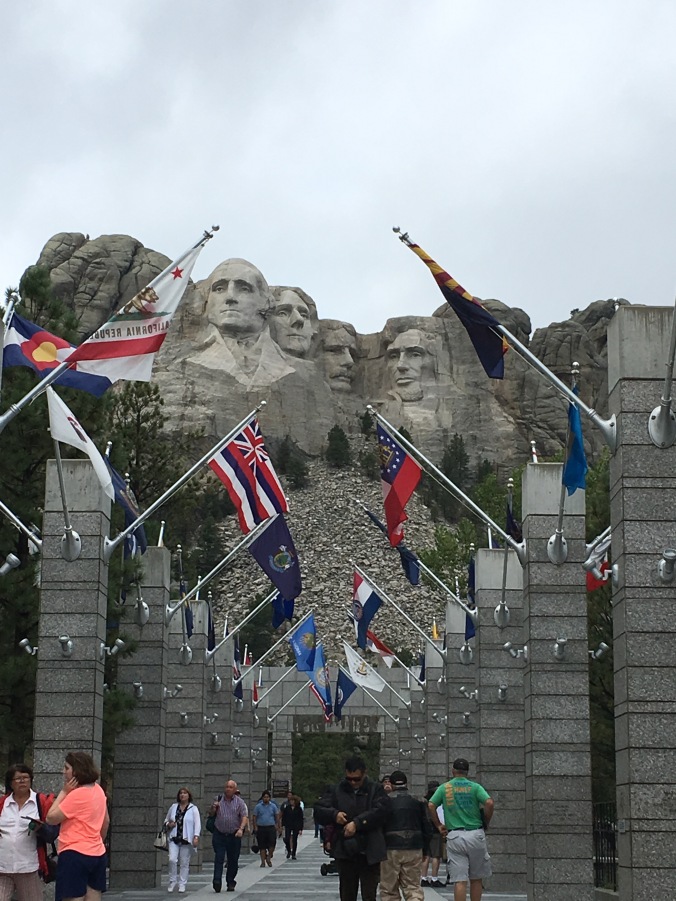 Other than the requisite gift shops and restaurants, there’s mostly open space for you freely move around.  You can take a mile loop around the park, and see the monument from many different angles.  There’s a lot of information on how it was built, the presidents, etc. 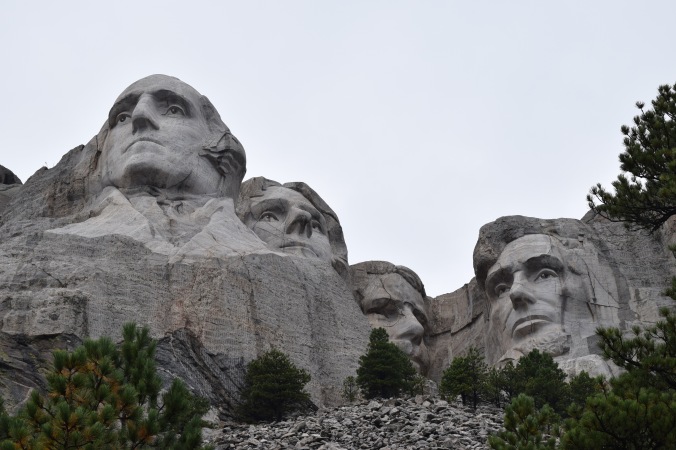 The food at the cafeteria isn’t terrible, your typical hot dogs, bison burgers and fries.  The thing that everyone has to get is Thomas Jefferson’s ice cream, which uses his recipe.  It’s gimicky, but can be refreshing on a hot day. 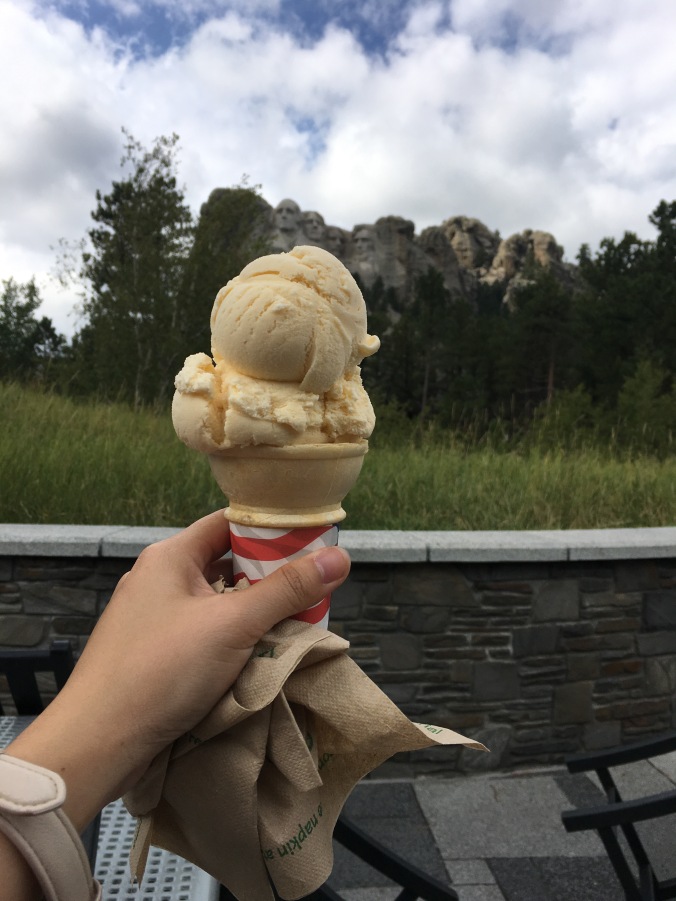 The weather changed a lot while I was there, from light rain to bright sun to gloom, but that allowed me different shots of the facade.

Head to Rapid City to check into your hotel (there’s not many options, the Holiday Inn served its purpose and was fairly centrally located near Memorial Park).  I traveling to a place with a lot of set destinations, I find it’s really convenient to stay in a hotel that has breakfast, so you can just get up, grab some hard boiled eggs, danishes and just go.

the most american thing i’ve ever seen

Rapid City actually has a very nice downtown.  There are statues of the former presidents scattered throughout town.

It’s a town catered to tourists, so there’s a lot of shops and eateries; antique malls and galleries, but it’s got its own local flare, too.  It’s well designed and manageable.

Because we were heading back to Mount Rushmore for a nighttime program (I know, such a tourist), we had to grab a quick bite.  Rapid City seems to have a really burgeoning restaurant scene, with surprisingly more than one Nepalese restaurant (?), that is worth looking into if you have more time. 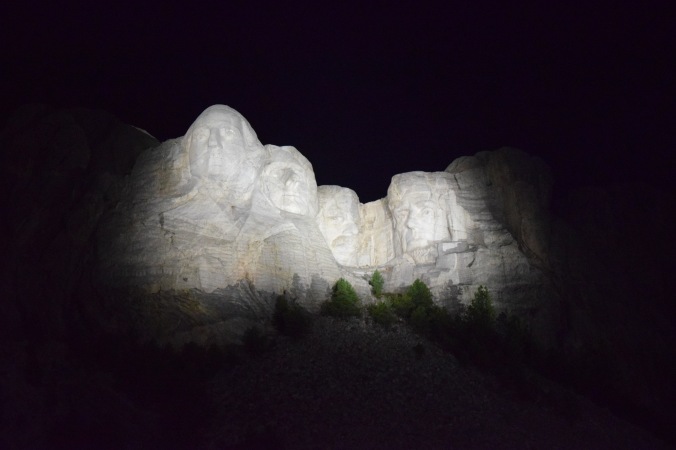 The nighttime Mount Rushmore program is worth it.  I’m just gonna say it.  You see it lit up, you watch a rousing movie National Park Service film about America (think purple mountains majesties–I cried), and then they call up American servicemen and women who each get to state their name and branch of military while partaking in a flag ceremony.  It’s very moving.  Like Lee Greenwood looping in your head, moving. 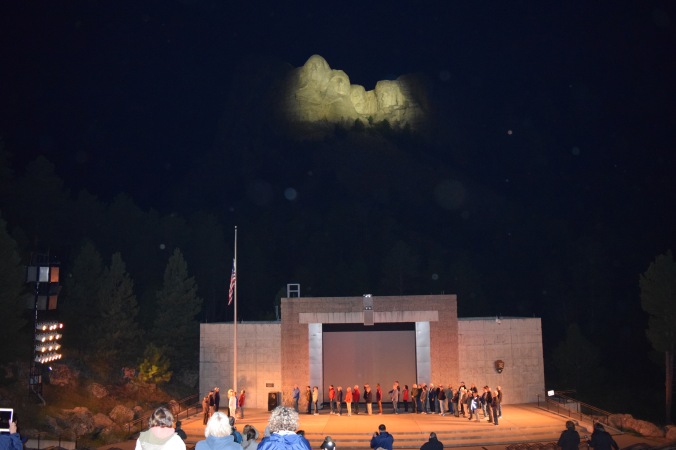 proud to be an american

Before you leave the Southern Black Hills, you should visit Crazy Horse memorial and museum.  This private endeavor built to commemorate the Lakota warrior, is unfinished, and has been in the works more than 50 years.  It is not without controversy, but if it is ever completed, it will be the largest statue in the world. The North American Indian museum has a lot of artifacts from different tribes to enrich your experience, too.

What destinations are on your US bucket list for travel?