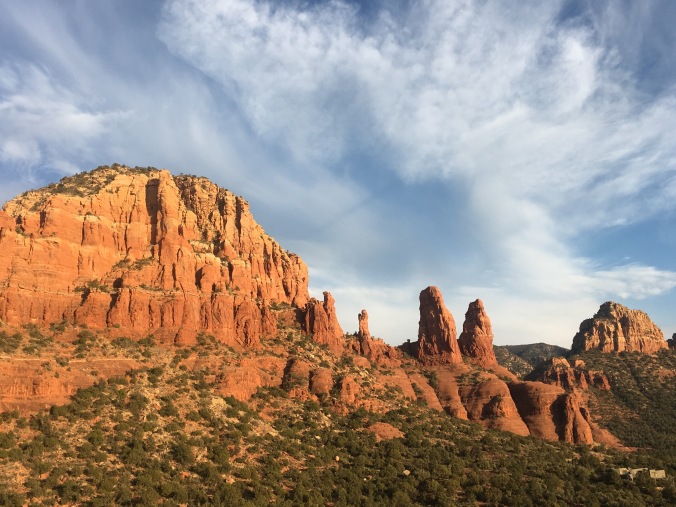 Sedona, Arizona is one of those rare, special places that has be experienced first hand to understand what people are talking about when they describe its magic.  Famous for being a “vortex,” an area where energy is entering or exiting the earth, Sedona draws millions of visitors from all over seeking its intrinsic benefits along with being a kickass vacation destination.  These energy flows are said to enhance wellness, mindfulness, and spirituality.  Those who have experienced it often feel recharged, refreshed and awakened.   And even if you don’t feel anything specific, the breathtaking views of Sedona’s natural beauty are definitely inspiring enough.

I’ve always liked heading to the desert.  There is a quiet peacefulness about it that is very calming to me.  Not a ton of chirping birds or rustling leaves, it’s very still.  I love that about Arizona.  And I especially like visiting in the winter offseason when crowds are less and it’s not a billion degrees (highly recommend).

the red sandstone it fell, right smack on top, Sedona…

Sedona is located about 2 hours from Phoenix, and there are a lot of attractions and sights to see along the I-17.  As you’re leaving the city, you’ll see the saguaros with their arms bidding you goodbye.  There are almost as many cacti along the side of the road as there are in the Saguaro National Park.

An amazing historical site is Montezuma Castle National Monument.  Neither Aztec nor a castle, this misnomer of a destination was actually an early high rise of the Sinagua indigenous peoples who inhabited this area in the 1100-1300s.  What is even more incredible than the timeline is that fact that this condo was allegedly built by Sinaguan women.  WE CAN DO IT.

I’ve seen several indigenous dwellings in my life, however this is one of the best preserved and closest view.  The nearby Montezuma Well (again not related to Aztecs) is a limestone sinkhole where you can see more dwellings including a hohokam pit style home.  A National Park Pass (imperative for the American road traveler) will get you in to both for free.

It’s incredible how these geologic wonders occur only in certain areas and seemingly arise out of nowhere.  Head to the Chapel of the Holy Cross, an architectural stunner of a church built into the side of a butte.  The panorama from the grounds of this cathedral is so pretty, and it is also said that there is a feminine energy vortex here as well.  You’ll also see an enormous house right below the church, and it is the house that Lasik built, belonging to Dr. Ioan Cosmescu who invented the laser used in the ubiquitous ophthalmologic procedures.  Should have been a medical inventor…still can be, maybe?

We were there around sunset, which reflected the orange and blues of the north side of the valley beautifully.  Check out the formation of a mother holding two babies.  The formations do require a bit of imagination, but let the magic of the valley help you find your inner creative spirit.

Continue on this scenic highway until you reach highway 89 which will take you into the heart of Sedona.  This town may seem sleepy, but it is anything but.  There are tons of shops, restaurants, and things to do.  A lot of things have to do with wellness and health, and you’ll see plenty of purveyors of crystals and outdoor yoga studios.  Of course, outdoorsy activities are popular, and if you’re into hiking, then you’ve hit the jackpot.

Elote Cafe is a really nice place to have your first meal in Sedona, new Southwestern cuisine, it is the perfect casual fancy dining experience to kick off your trip.

Tlaquepaque Arts & Crafts Village is a quaint shopping area with boutiques selling Native American rugs, jewelry and trinkets, galleries and an assortment of restaurants.  Even if you’re not a fan of shopping, walking around to admire the architecture is enough.  Luckily, Los Abrigados resort where we stayed was located adjacent to this area, so there was plenty of opportunities to explore it.

You’re going to want to turn in early because the second day is going to be a lot of driving.  Because I only had a few days, I planned a super ambitious trip, and if you’re not interested in such a fast-paced itinerary, you can certainly spread this out over an entire week.

I’d wanted to visit Antelope Slot Canyons ever since seeing the James Franco classic, 127 Hours.  Obviously without hoping for the ending.  Slot Canyons are unique narrow caverns that were created by whirlpools of water and erosion over millions of years.  They are located all over the world, however some of the most famous are these in Northern Arizona.  There are Upper and Lower Canyons, and because I was unsure of what the weather conditions would be like, I only planned for Upper Canyon (flash flood risk for both canyons, but worse with Lower).

The drive to Page is about 3 hours from Sedona, but it’s mostly flat and easy.  There is a stretch of 89 that is slightly mountainous as you head into Flagstaff, and you should be aware that there is a high likelihood of encountering deer in the early morning.

The Antelope Canyon is located on Navajo reservation, and thus to visit them you have to book a tour with the Navajo companies who will take you into their land.  There are only limited tours that run on Sunday, so I chose Antelope Canyon Navajo Tours.  All the tours are about the same, you ride in the back of a semi-covered truck (cover your mouth and eyes, sand goes everywhere) for about 10 minutes until you get to the mouth of the caves. 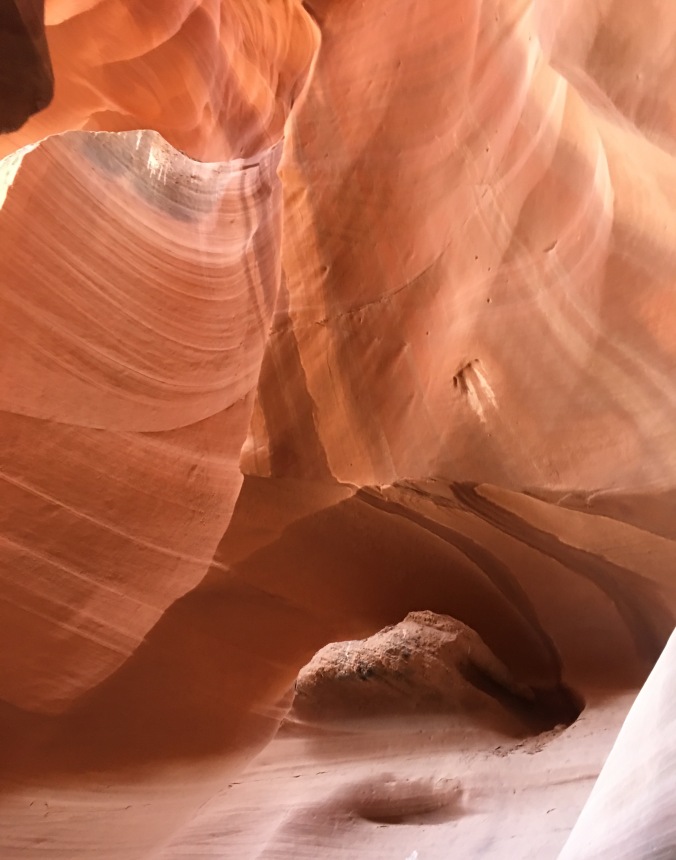 You are led by a tour guide who will show you the best spots and settings to take pictures.  Just remember to look away from the light, and shadows are your friend for great photos. 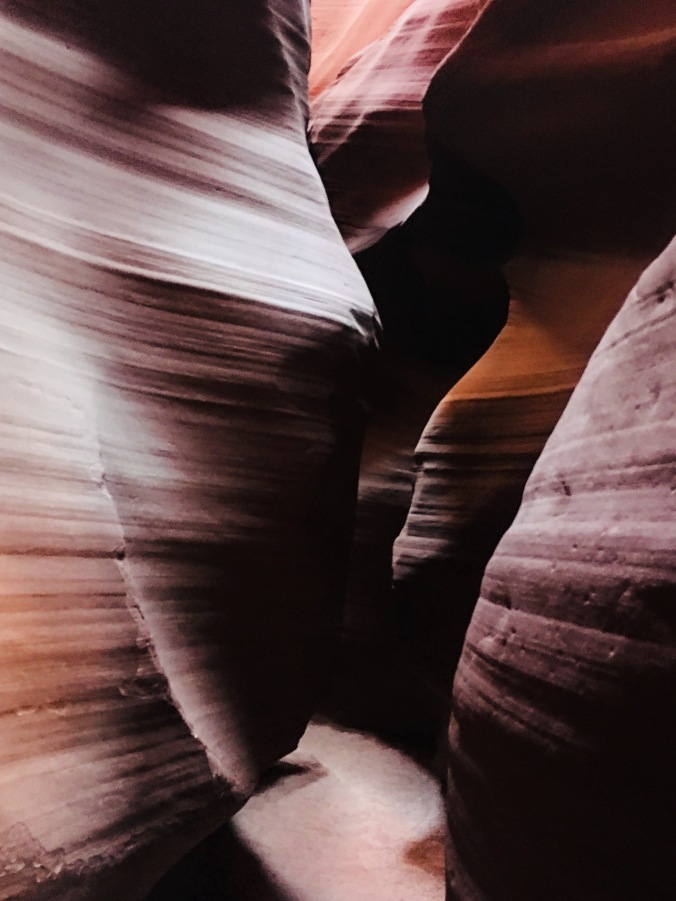 It can get very crowded as it is an obviously popular site, but despite the crowds, you can catch some amazing photos.

In the summer it is easier to catch sunbeams through the caves, but the winter affords some distinct low light captures.  I’m no photographer, but I left these photos untouched to show you that even the most amateur of picture takers can get professional worthy shots.

Next you’re going to make the super short drive to Horseshoe Bend, probably one of the most beautiful natural wonders I’ve ever seen.

There’s not much to eat in this part of the world unless you like McDonald’s and Sonic (which I do, but not for these purposes), so be sure to pack a picnic.  We imported some banh mi from Da Vang in Phoenix (they use bolillo rolls for that extra AZ touch).  The Horseshoe Bend parking lot is spacious and restrooms that are fair in cleanliness.

You’ll need your strength for the 0.75 mi hike each way to the viewing area.  This incised meander (rock that has been cut down by water from a stream/river) sits in the Colorado river.  It’s named after what it looks like, a horseshoe.

Now, I have to say that I couldn’t get the best pictures because the viewpoint sits 4200 ft high and I am not a fan of hanging over precarious edges.  But at least I got a few where you can see the ring of water.  If time permits, you can head to Glen Canyon as well where there is a similar meander and a large dam.

But, instead of doing that, we took a two hour detour to the Grand Canyon.  This was totally impromptu and in no way do I recommend this for your first visit to one of the best national parks in the country, but I had spent a whole week there when I was younger, so a quick trip was just fine with me.

It was worth it.  There’s nothing like the splendor and immense vastness of the Grand Canyon to inspire you.  It has been 20+ years since I’d visited the first time, and it’s as synapse sparking as ever.

Pictures do not do it justice (I know, cliche, sorry not sorry).  As there was a race against the clock to make it before sunset, we headed to Mather Point, one of the most iconic views of the canyon.  There are many observation points throughout the park, so take your time if you have it. 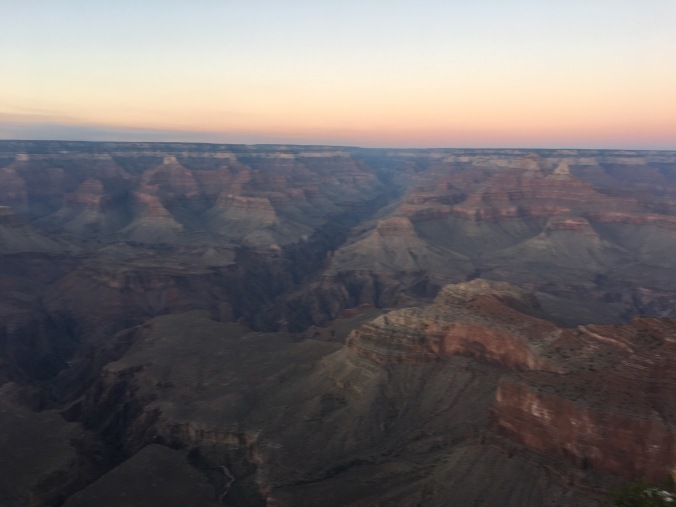 The shadow of the day obscured some of these shots, but while you’re there, maybe put the camera down and just live in the moment and feel the cool desert air against your face.  Viewing the sunset here is enchanting as is sunrise and all other times of the day.

On your last day of this epic desert adventure, head to the Sedona airport mesa, a vortex site that provides sweeping views of the valley.  Early morning hiking is the best and the air feels more crisp up on the butte. 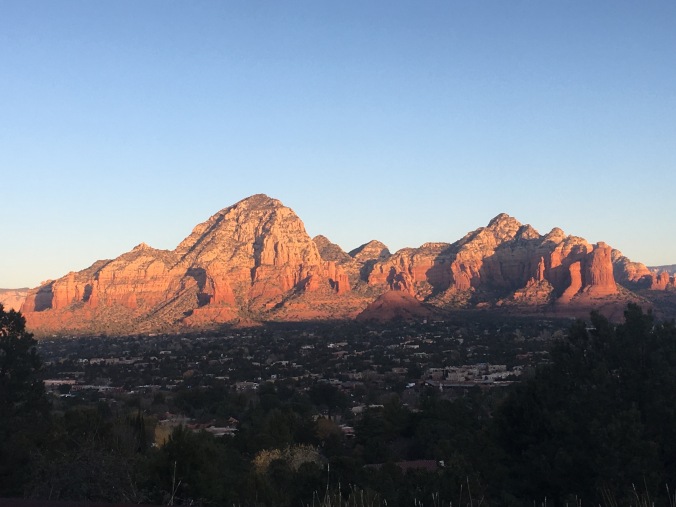 Before you leave, make sure you at least hit some of the trails at Red Rock State Park, Boynton Canyon, and Bell Rock where you have opportunities to hike your heart out.  These are also noted vortex sites.

Snoopy Rock is another notable butte, named after, you guessed it, Charles Schultz’s beloved canine character (Woodstock sits on his nose).

If you’ve worked up an appetite from all the climbing and marveling, head to the base of Coffee Pot Rock, where you will find Coffee Pot Restaurant, a homestyle eatery known for its extensive omelet menu.  Huevos rancheros were super sabrosos.

If you’re needing a bit more peace after traversing the desert multiple times over yesterday, head to the Amitabha Stupa, a Tibetan buddhist park where pilgrims from all over seek transformation and spirituality.

Uptown Sedona has tons of boutiques in which you can drop a pretty penny on turquoise and other Southwestern gear, perfect souvenirs to take with you as you depart from your enlightened trip to Sedona.

open your heart to me