Baltimore is probably not the first place that pops into your head when you’re planning a vacation.  It’s probably not in the top ten…but they didn’t self-anoint it Charm City for nothing!  Find yourself not weak nor weary, and set out on an adventure filled with fantastic art and forgotten lore.

It’s certainly a gritty city (there’s a reason why the Wire was based here), but underneath the surface, there is a ton of history and culture just waiting to be found.  I mean, Edgar Allan Poe was inspired to pen some of the most suspenseful, fantastical thrillers while living here, so say no to Baltimore?

I bid you nevermore…

BWI airport is one of the three airports serving the Washington DC metro.  It’s pretty close to downtown Baltimore, about 10-15 minutes to the waterfront area known as the Inner Harbor.  This area houses many chain restaurants, the National Aquarium, and a marina where you can rent some dragon paddle boats or spy on some serious yachts. 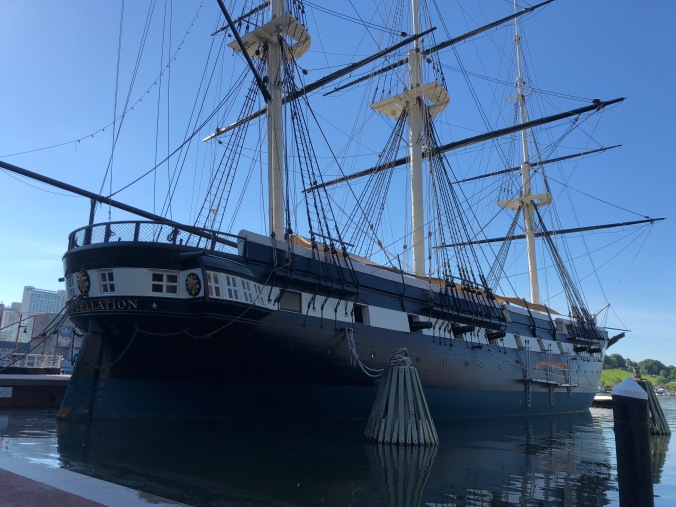 The USS Constellation is also docked here, and you can take tours of the last Naval sail-only frigate.  The lady was in operation for almost a hundred years before retiring in the 1950s in Baltimore’s harbor, where she will remain forevermore.  This area is a beautiful running or biking path in the morning, so get your Under Armour (famous Maryland company) on and get to it, before it gets overrun with tourists. 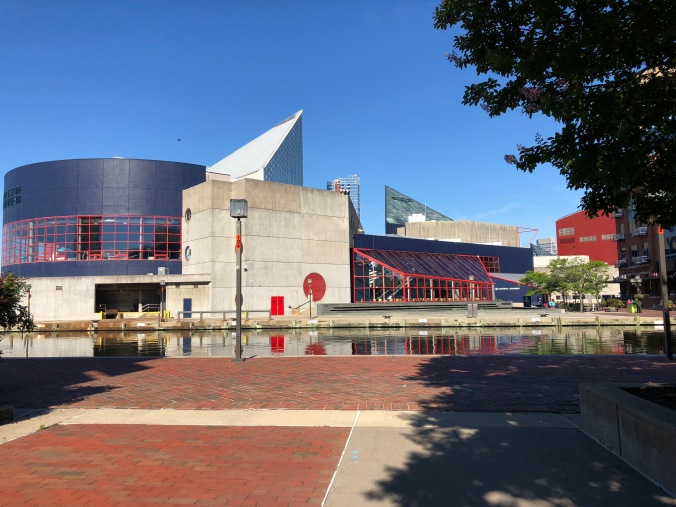 Miss Shirley’s, well-known local breakfast institution, has an outpost here, but if you’re wanting to experience local Baltimore, head to the location in Roland Park.  Water for Chocolate is another popular brunch spot for “sexy comfort cuisine,” their words, not mine, in Upper Fells Point (sweet potato bread pudding, anyone?) as is the Charleston.

The main complaint I have about this city is that parking is nearly non-existent on the street and the lots are very expensive.  Like $8/hour expensive for parking near the harbor.  If you park down here, plan it out so you can walk around multiple attractions.

If you head west, you’ll run into historic Camden Yards, home of the Orioles.  Baltimore is a real baseball town, and if you’re similarly inclined, make sure you stop at the Babe Ruth museum, celebrating the hometown boy, the Great Bambino. 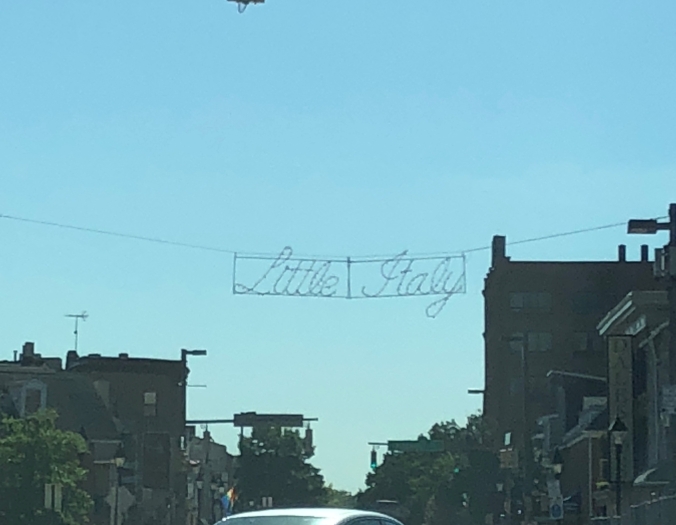 If you head east, you’ll hit a slew of cafes and osterias of Little Italy.  Many European immigrants arrived in Baltimore’s harbor in the 1800s recreating communities reminiscent of their home countries, and Baltimore’s culture is enriched because of the vestiges from this era.  Every neighborhood has a distinct feel and flavor, and the city remains a melting pot of citizens.

This neighborhood borders Fell’s Point, which is the trendy area filled with lots of young professionals getting their Whole Foods on (lots of khakis and chinos going on here).  I mean, there’s a Warby Parker, so that’s what you’re getting in this area.

Grab a drink in one of the many pubs and bars in the area and take in the view of the harbor.  Once upon a time, several years ago, I fell in love with Kali’s Mezze (who doesn’t love Mediterranean tapas?), but apparently online reviewers don’t agree with me, so take the recommendation with a grain of salt or according to them, less grains of salt.

On the weekends, there is a large Farmer’s Market in this area that attracts tons of local purveyors galore.  And you can bet your bottom dollar there’s seafood vendors hawking crabs and scallops and other sea creatures from the Chesapeake Bay.

If you’re not there on a weekend, do not despair.  There’s a year round food hall, Lexington Market, that has been in existence since the 1800s.

This market is in a sketchy area, for sure.  But, there are rows and rows of food counters serving up fried chicken, fresh fruit, Chinese, etc.  You have to visit Berger’s Bakery for a sweet treat: the Berger cookie.

This cookie is shortbread bathed in a generous layer of chocolate ganache. It is very good, and it’s very representative of B-more (you can also get it in local grocery stores).

The Preakness of this market is the renowned Faidley’s Seafood.  This institution takes up a whole room in this marketplace, with three counters.  Fresh, Steamed and Fried.  I think you know where we’re going with this: fried crab cakes.

If you didn’t know, Maryland is known for their blue crabs.  Seriously though, if you didn’t know that, you may want to skip reading this blog and perhaps pick up an encyclopedia or something to augment your cultural knowledge.  The world is vast, people.

Steamed crabs are the best, but man on man is a Maryland crab cake a delicacy to behold.  If you’ve ever had a crab cake made elsewhere, you’ve probably noted that there’s so much breadcrumb/celery/carrot slurry that the texture starts to resemble that of cardboard and sawdust.

get crabs in maryland

Not so much here.  If you order the $15.95 lump crab cake, you get this large mound of crab cake that is mostly succulent crab meat with very little filler.  It’s VERY good.

Because I am not from Maryland and thus am an amateur, I like mine with remoulade sauce, which they do not have here.  Don’t ask.  Just get some hot sauce and call it a day.

Because these little nuggets are calorie bombs, walk it off because just down the street is the burial site of Edgar Allan Poe. 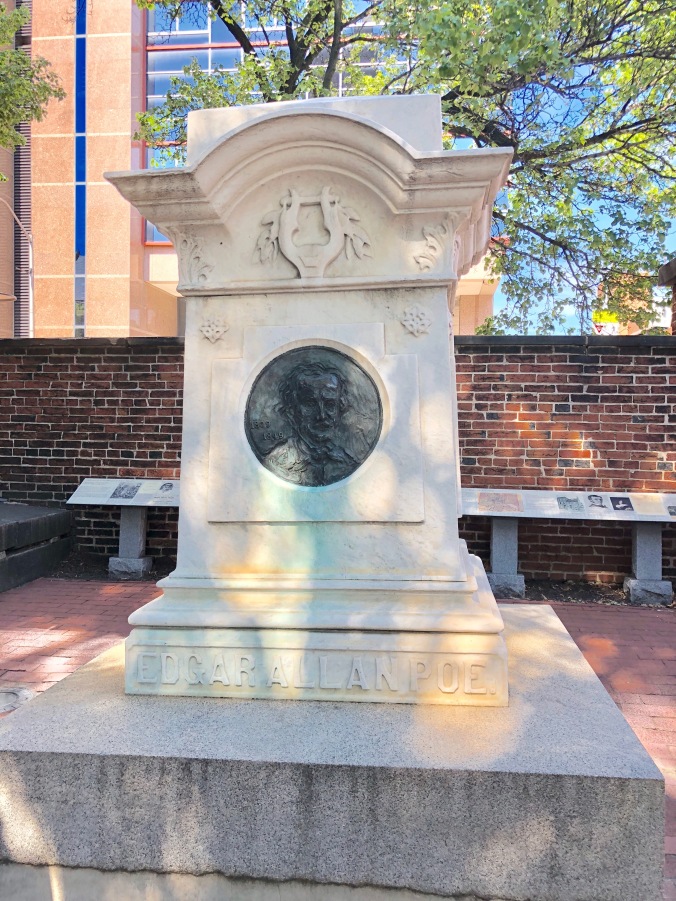 Probably one of the best known American poets/authors ever, Poe brought you macabre hits like the Tell-tale Heart, Annabel Lee, the Cask of Amontillado and of course the Raven.  He had a crazy life, orphaned young, married his 13 year old cousin, died young from likely alcoholic encephalopathy or syphilis or killed by the mob? And in between that, he had time to be a pretty prolific writer. He was like an old-timey Jerry Lee Lewis.

He is literally so celebrated here that they named their NFL franchise after the titular fowl who would not leave the narrator the hell alone.  Can any other dead poets claim that?  Perhaps the Ravens wish their team to torment and drive their opponents to madness as the eponymous bird did in what is one of the world’s most famous poems.

If you have time, there’s an actual Edgar Allan Poe museum to visit, but…I chose to visit some of Baltimore’s other fine museums.  The Walters Art Museum is located in the middle of the city, right next to the Mount Vernon memorial to George Washington.

This public museum is free which is amazing because it houses a collection that has works spanning more than a thousand years.  It was started in the early 20th century by a son who built the structure to house the collection of his father and his art (his father was a Confederate sympathizer who had fled to Paris during the Civil War — and picked up the hobby of serious art collecting whilst there).

Their collection includes the George Washington portrait by Gilbert Stuart (it’s literally the most famous portrait of him), extensive Asian art antiquities and a lot of art nouveau pieces including those by Lalique, Tiffany and the reason I was there: Faberge eggs.

The most decadent Easter eggs in existence, these bejeweled ovum were created by the House of Faberge under Peter Carl Faberge in St. Petersburg in the late 19th Century as gifts to the womenfolk of the former Russian royal family.

There’s an exhibition built around the two Russian ovum they have in the permanent collection going on right now.  I think the Russian Imperialist period was incredibly fascinating, from Tsar Alexander to Tsar Nicholas (who was murdered with his entire family by the Bolsheviks) and these are everlasting symbols of beauty from this era.  The Walters have 2 of these eggs, the Gatchina Palace and the Rose Trellis.

Across the street from the galleries of the Walters is the Peabody Institute of Johns Hopkins University, one of the most famous conservatories in the world.  Fun fact: Tori Amos was the youngest person ever admitted to this conservatory, at the age of 5! (!!!) Y Kant Tori Read?  Because she was in music class from kinder care and on…

I highly recommend taking a gander inside because you’ll find one of the most beautiful reading rooms in America.  It’s gorgeous, but you can only visit the first floor.

Across the street from this landmark is the Mount Vernon Methodist Church, you’ll recognize it from the behemoth gothic style.  And next to this is the original Washington Monument.  Baltimore was one of the largest cities in the early republic, so the memorial was erected here by Robert Mills, who later designed the larger and more well known monument a few miles down the road in D.C.

Because you can never get enough of art, head towards the campus of Johns Hopkins University, one of our country’s most esteemed institutes of higher learning.  It’s a sprawling campus, with lovely brick buildings that seem to make up a lot of Baltimore’s landscape (it’s a very East Coast look).

Right in the middle of the Homewood campus is the Baltimore Museum of Art. 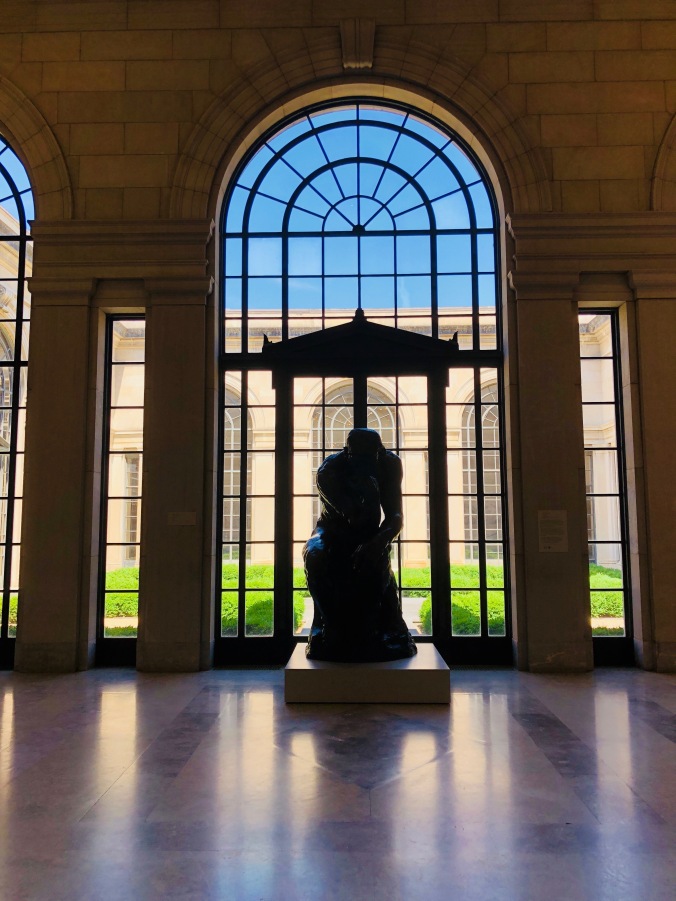 This museum houses one of the finest collections in the world.  The collection has quite a range, from Antioch mosaics to Yayoi Kusama.  The Cone collection (read up on these highly en vogue sisters who collected THE BEST art) boasts the largest private collection of Henri Matisse paintings in the world.  I literally stared at a print of this Purple Robe with Anenomes painting for most of my childhood as it was in my family’s den for years.  Love it. 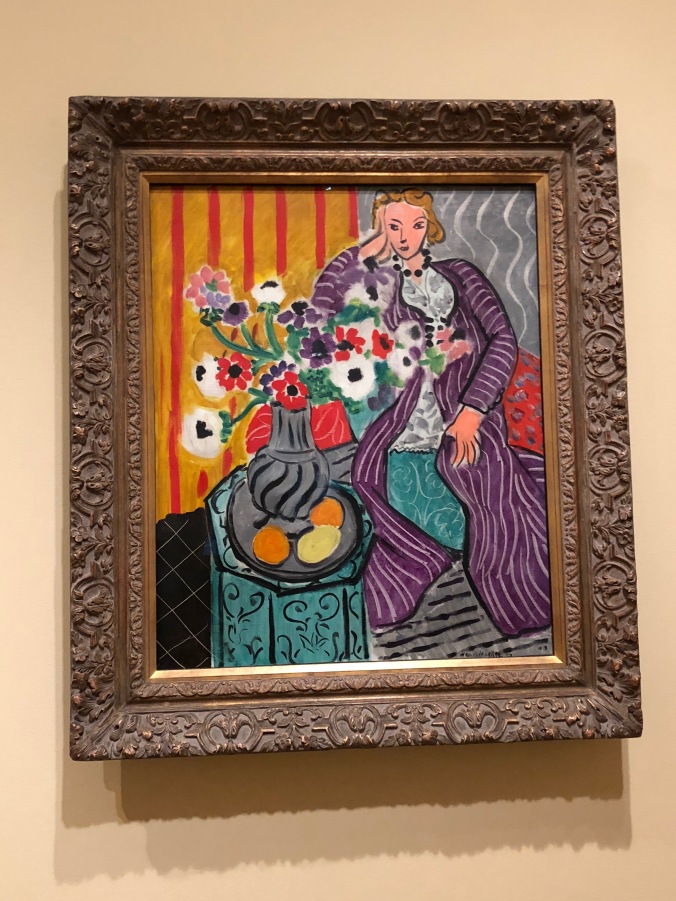 As with most great museums, there is both a Rodin’s Thinker and a great restaurant, Gertrude’s Cafe, run by John Shields.  And just look at the atrium.  Wedding venue city! 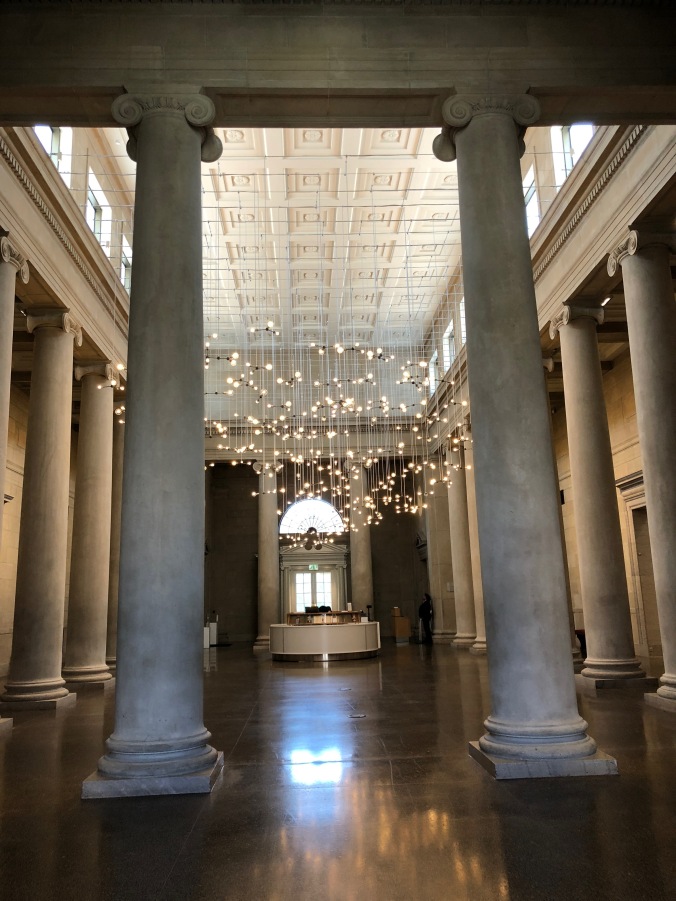 The area around campus is in the charming Roland Park neighborhood.  They self-advertise as Charm City for a reason, there are a lot of cool neighborhoods.  Charm City Cakes of Ace of Cakes fame (shout out to art school crush Ben) is located near campus, and the Charmery ice cream parlor is a great place to relax and enjoy a cone after seeing the Cone.

And since you’ve literally been all over town and are probably ready for a nice dinner.  Woodberry Kitchen is located in a refurbished mill and serves up some swoonworthy new American cuisine (oysters, buttermilk fried softshell crab, scallops, etc) for you and your Lenore to remember this charming trip to this charming city.