Florence is the Renaissance city of all Renaissance cities.  Sitting in the cradle of the Tuscan region, Firenze is the locale that probably best encapsulates all of which Italy is known.  It’s a delightful mix of old world and modern Italy, with its cobblestone streets juxtaposed with industry and high fashion.  There is more art than you’ll know what to do with and the food and culture is spectacular.  Take a poll of people who have been to Italy, and I think 8/10 will say Florence is their favorite.  There’s a reason for that, it’s an enchanting, captivating place.

the dog days are over…

The first order of business when you get to Florence is to see The Galleria dell’Accademia di Firenze.  Backing up a bit, as I mentioned, Florence was the birthplace/capital of the Renaissance.  If you know anything about the Renaissance or its art (or at least the names of all the ninja turtles), you know that Michelangelo is its most revered son.

And while Michelangelo is probably most well known for the Sistine Chapel, he actually didn’t care for his paintings as much as his sculpture.  And thus, that brings us to David.

Michelangelo’s other widely renowned masterpiece is the gargantuan 17 foot statue of the biblical hero (i.e. David and Goliath).  He stands right in the center of the Galleria dell’Accademia…the focal point of the museum.

But…I actually think Michelangelo’s other works are worth a long examination as well.  Everyone goes for David, but I promise you will leave with a greater appreciation of the art form as a whole.  It’s incredible what that man was able to do with a chisel.  Check out the unfinished prisoners and a possibly not Michelangelo produced Pieta (other authentic versions live in the Duomo of the Cathedral Santa Mario del Fiore –which hold your horses, you’ll read about in a minute– and St. Peter’s Basilica in Vatican City).

David himself is a bit skewed in his proportions depending on where you stand.  His right hand is gigantic when you look at its placement on his thigh.  The best part of the status are the anterior and external jugular veins in his neck.  The detail is incredible.

It’s really worth taking a guided tour here to learn more about the history of each work and of the man.  I love that Michelangelo just hated everyone, but it was likely a projection of the discomfort he felt within himself. He’s often a more interesting subject than his works…a piece of work, if I must.

Walking towards the old town, Florence is very easy to navigate with a grid-like plan.  Via ricasoli will take you directly to gothic style Cathedral Santa Maria del Fiore, home of the famous Duomo of Florence.

Brunelleschi’s red brick cupula is one of the most recognizable features in the city and is an engineering marvel that has stood the test of time and weather and war since the 1200/1300s.  A couple of guys you may have heard of contributed to its planning: Donatello and Leonardo da Vinci. If you’re keeping track, Raphael is the only ninja turtle not involved with this structure.

Across from this cathedral is the Baptistery of St. John.  This peculiar octagonal building is built in the Romanesque style and was erected in the 1000s.  And it still stands out, with its very stylish mosaic detail and the large bronze ‘gates of paradise.’  However, the gates of paradise are just replicas, as the real ones are housed in the Museo dell’Opera del Duomo. 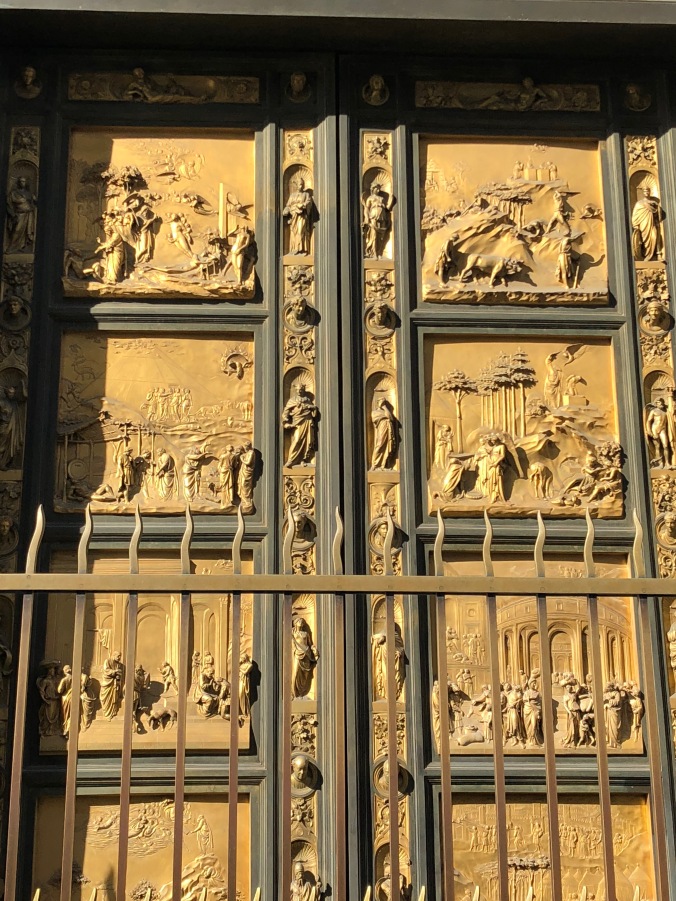 Fun fact, I’ve seen two of the other three replicas in the world:  Grace Cathedral in San Francisco up on Knob Hill and Nelson Atkins Museum of Art in Kansas City.  Now I just have to visit the Kazan Cathedral in St. Petersburg, Russia and I’ll have gates of paradise bingo!

If you have time, I’m sure a climb up Giotto’s tower of the cathedral will afford you an incredible view of the city.  But, continue on your way down Via dei Calzaiuoli until you hit Piazza della Signoria, which is the city center. 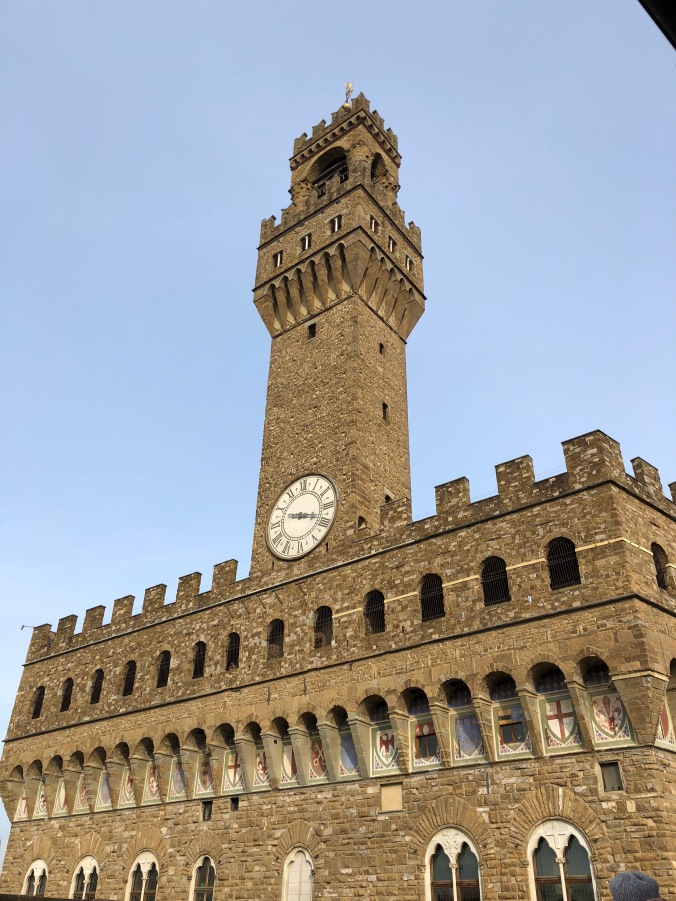 This plaza is flanked by cafes and shops all around, but at the far end lies the town hall of Palazzo Vecchio with its looming tower and replica of David standing guard.

There’s also many statues holding court at the Loggia dei Lanzi including works from Donatello and Cellini.

At the opposite end is another famous Florentine art house, the house of Gucci.  Founded in 1920s by Guccio Gucci, this Italian luxury brand has ascended the ranks of high fashion and become a household name.  There’s a museum and a cool as hell shop with items that can only be found here.

You can’t talk about Florence without talking about fashion.  Some of the most lusted after brands in the world started in this area:  Gucci, Salvatore Ferragamo, Emilio Pucci and Roberto Cavalli, and they continue to reign supreme.  Art begets art, and having such a creative world around no doubt helped these designers find inspiration around every corner.

Continuing your walk in the old town, you’ll reach the famed Ponte Vecchio bridge.  This patchwork quilt of a structure crosses over the Arno River.  This latest iteration is from the 1300s, but previous versions were damaged by flooding.  Nowadays, there are lots of jewelry vendors along the bridge although it does appear to be a little sketchy.

By this point I was dying of hunger, but had to hold out until I could hoof it back to the Mercato di San Lorenzo near the center of town.  When you enter, go straight to Da Nerbone.  You will probably smell it before you see it.

This is one of the finest sandwiches I’ve ever eaten in my life.  Full disclosure: I am not a sandwich person.  I don’t really like them, unless there’s pork of some sort of them (BLT is my favorite type).  Here there is a sandwich that meets and meats this criteria: the porchetta.  You will read reviews telling you to try the lampredotto tripe sandwich which is traditional.  You should have the porchette.

Crispy, crunchy, fatty…it’s perfection.  The bun could be heated up a little more, and so I don’t think it knocks a good Keller-esque BLT from its #1 position in best sandwiches, but it came real close.  It’s also one of the cheapest things you can find here. 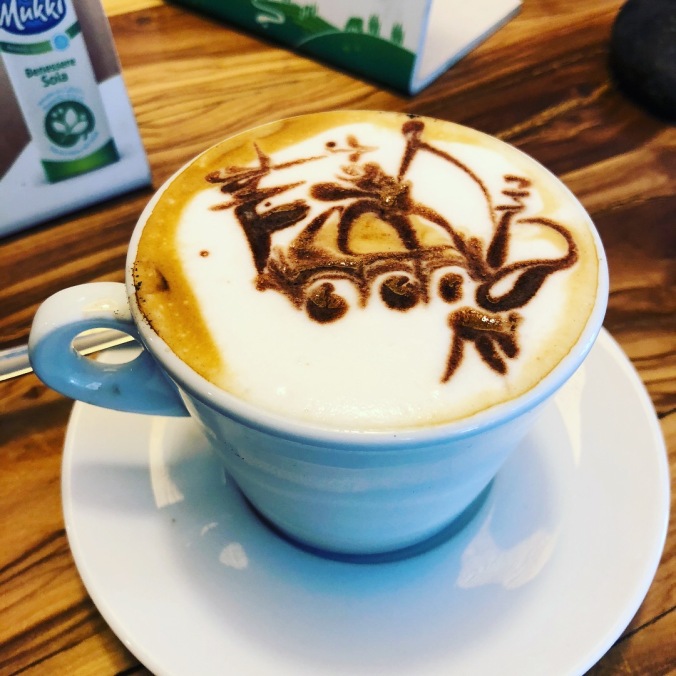 Before succumbing to a food coma, I had to find some an afternoon cappuccino to wake me up.  News Cafe is killing it on Instagram due to their very talented barista/owner Massemo, who can draw pictures of the Duomo in your foam.  That’s secondary, the coffee is really good, which, first things first yada yada yada.

To top off an already art filled bonanza of a day, you have to visit Uffizi Gallery.  Before going, you should read up on the prominent omnipotent Medici family that ruled over Italy during the 1500s.  They killed it in the bank game and were incredibly powerful.  When the dynasty died out, their art collection was donated to the city, and here you have the Uffizi Gallery, one of the largest art museums in the world.

Of course, everyone has to see the Birth of Venus by Botticelli.

After strolling around the museum for a few hours, your legs will hate you, but your mind will alight in all of the beautiful things it has seen today.  Treat your stomach with a steak florentine at Il Portale.  These huge T-bones can feed a few hungry people, and are best paired with a red from the Tuscan region…and lucky you, you just happen to be there.  Mangia! Mangia!

One thought on “24 hours in florence”