When I was in fourth grade, one of the books required for reading was called The Trumpeter of Krakow.  This was a tale of persecution, crystals and alchemy, a haunting brass pronouncement, and arson.  Things that every child should learn about.

Flash forward some years, who’d have thunk I’d be standing in the middle of Pope John Paul II’s hometown, staring at that very tower where the Trumpeter was murdered?

Poland is one of those former Eastern Bloc countries that typically flies under the radar, which I guess is a good thing for them because it’s not yet completely overrun by tourists.  I really loved visiting it, from the metropolitan and bustling capital Warsaw to the low key and casual Krakow.  Of course, there is a very storied history of this country because of role as the incendiary event of WWII (when the Germans invaded) which then lead to them being occupied by USSR from then until the end of the Cold War in 1989.  Lots of history.  Don’t sleep on Poland, I guarantee you it will be one of Europe’s must visit destinations in the next few years.

Krakow is a city near the Southern border of Poland, close to the Czech Republic.  It is the second largest in the country and one of the oldest, dating back to the 7th Century (!)  The Old Town is as charming as it gets with medieval European cities.  There’s the large open square/marketplace (Rynek Glowny), St. Mary’s Basilica, a castle…all on the banks of the picturesque Vistula River.

But before you hit the town running, get a little salty.

I don’t mean get butthurt, I mean visit the Wieliczka Salt Mine.  It’s only about 14 km away from downtown Krakow, so it’s the perfect half day activity, if you find yourself getting to the area in the afternoon.

This is one of the world’s oldest salt mines, mostly producing table salt until the early aughts.  Now, there’s a 2 mile tour that winds through the caves, showcasing salt carvings and even a chapel and event facility.  It is damp and cool and is a nice reprieve from a hot summer’s day.

The most famous Krakowian has to be Karol Wojtyła, more famously known as Pope John Paul II.  He pontificated from 1978 to his death in 2005, having been the first non-Italian pope in over 500 years at the time of inauguration.  You will see his face everywhere in town, from keychains to posters.  They are very proud of their former pope, and they should be.  He is the Pope of my childhood, and even though I’m not Catholic, he was responsible for making his position more visible, and bridging communications with leaders of Judaism, Islam, Buddhism and many other religions.  He was canonized in 2014, and you can visit him at the Vatican in St. Peter’s Basilica today.

Now that you’re well seasoned, you can make your way to Krakow proper.

To take it all in, you have to start in Old Town.  The site of the largest medieval square, the Rynek Glowny, is completely encapsulated by the Park Planty, kind of like a moat made out of greenery.  In the smack dab middle of the square is the Cloth Hall, which was a trading hotbed throughout the centuries.  It still is, its stalls filled with hawkers selling souvenirs and kitsch.  The upper level is a museum, but you should really marvel at the architecture, a major example of Renaissance period.

By now, you’re probably famished from your saltine spelunking adventure.  If you’re not tired of cavernous settings, a worthy option is Pod Aniolami, a 13th century gothic cellar-cum-restaurant.  There’s deer leg, boar and all sorts of chops and fish.  These are exotic cuts of eat, so expect higher end prices in a cool setting.

If that’s a little rich for your pocketbook, maybe try something a little more rich for your tummy instead.  Przystanek Pierogarnia is like a Polish version of a food stall, serving savory and sweet dumplings from a little window.  Do not leave Poland without eating pierogies. 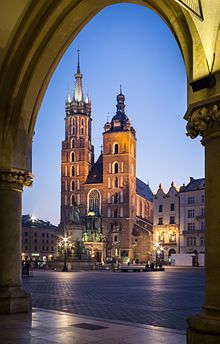 st mary’s image from wikipedia because for some reason i can’t find any of the ones I took  (!!!)

The evenings are made for communing in the square.  At the east end are two churches, St. Mary’s Basilica and Church of St. Wojciecha.  St. Mary’s has the tall towers, at the top of which is where the aforementioned trumpeter of Krakow plays the Hejnal trumpet signal hourly, famously cut off mid-song to commemorate the 13th century trumpeter who was shot with an arrow through the throat.  Doesn’t that totally blow?  Or not blow as it were?

If you’re staying around the square, it’s convenient because of all the FOOD.  Milkbar Tomasza is right on the square and it serves a lot of hearty breakfast food, including oddly enough a whole Irish breakfast, but with Polish bacon.  Although, I’d be more interested in the kielbasa, especially now that Costco is no longer seeing Polish hot dogs.

Walk due south of the square until you reach a path that will lead you towards an impressive collection of structures on a hill.  This is Wawel Castle, built for Casimir III, and a symbol of Polish royalty throughout the years.  This castle is the perfect place to catch a glimpse of all styles of architecture:  gothic, renaissance and baroque and of its immense collection of European art.

There are so many cathedrals in this part of the world, but the Wawel Cathedral is quite beautiful, if not more austere ; ) on the inside than St.  Mary’s down the road.

After visiting the castle, continue onto Kazmierz, the Jewish District, where you can visit Oskar Schindler’s enamel factory (the guise under which he, a German member of the Nazi party, saved over 1,000 Jewish employees during the German occupation in WWII).  Obviously reference: Schindler’s List. This serves to prepare yourself for visiting Auschwitz-Birkenau…although I’ll say nothing can ever prepare your heart for that.

This factory is now the home of the Modern Art Museum and the Krakow Historical Museum, worth a gander.  This part of town is the Jewish Ghetto, and there are many notable sites including a fragment of the Ghetto wall and the Heroes Square.

Down the block from here is where you should dine: Kuchnia Polska Gaska, a charming little eatery that specializes in all things affordable and goosey.  I’m talking goose pate, goose breast, goose broth.  Also pierogies, pork loin, latkes…good old comfort food you can polish off.  Starka is another restaurant in the area that has an extensive vodka list.  The Poles love their vodka…you’ll see, they have it with every meal.

For your last day in this region, visit the infamous Auschwitz-Birkenau Memorial and Museum.  It is about an hour away from Krakow, but it is such an important site that it is not to be missed.

As a warning, I’m not sure if I’ve ever been more sad at any place I’ve traveled.  Everything that happened in these concentration camps during the Holocaust was atrocious.  The exhibits in the museum are so evocative and stomach-wrenching; you will weep for these people, these families who were so unjustly persecuted.  It is difficult to make it through the museum, it’s hard to digest the pure evils that led these innocent victims to their fate.  It’s always important to face these horrible facts so that we, as people, see to it that events like this do not happen again.

Your visit to this area will likely take up most of the day, and even if it does not, you’ll be too spent to do anything else, really, but to reflect upon life.  Even though it’ll give your trip to Southern Poland a sobering, solemn ending, I used my time there to really think about humanity as a whole.  Cherish life and the people you’re traveling with, revel in the opportunity to be able to explore and learn new cultures — things that others weren’t as fortunate to be able to do because of their religion or ethnic background.  Be thankful in the ability to travel, use it to gain knowledge. Traveling is a tool that brings everyone a little closer, so there is more understanding, more tolerance. Things we could use a little more of in this world.