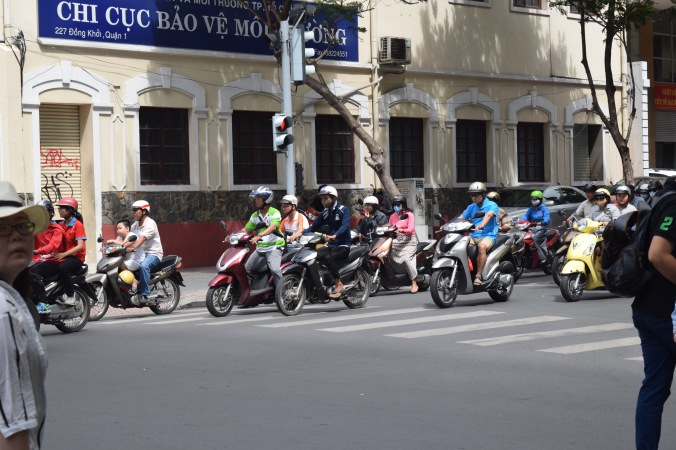 Vietnam is one of the most popular places in the world to travel, probably because it has everything: culture, art, delicious food, natural beauty, miles upon miles of beaches, history, welcoming people, hospitality and above all else, affordability.  You can live like a king on a moderate budget, every dollar goes super far here, while not sacrificing quality.

When traveling to Vietnam, you’re going to want to traverse the entire country, as there are unique landscapes, disparate culture and people throughout.  Even though it’s a smallish country, citizens from each region are very proud of their own distinct communities, from food to style and everything in between.  Just don’t get into a debate about who invented pho…there’s no winning with that one (it was the northerners ;).

The south of Vietnam is a great place to start.  Ho Chi Minh City (formerly Saigon) is the country’s largest city by population.  The history of this city is rich, from its origin after Vietnamese conquered Khmer area, to the capital of French colonial rule to the then doomed epicenter of the Republic of Vietnam.  Because of the timeline of all sorts of different influences, the city is a mishmash of architectural styles.

Above all else, this is probably the epicenter of the future of Vietnam, with skyscrapers sprouting up everywhere and a population that is projected to be near 15 million in the next few years.  Not as cramped as Hanoi, this area is certainly still very crowded with motorbikes and people teeming into the streets every which way…and it’s ever changing.

Vietnamese food is some of the best in the world and a lot of the reason for the international acclaim comes from the south.  Of those who were able to leave Vietnam during the war, many came from the South and were able to take their traditions and dishes with them to the far corners of the Earth, so most of what us Westerners have seen as the most popular dishes have come from here (except for the best Cha Ca, Bun Cha, Bun Rieu, Pho from the North and Bun Bo Hue, Mi Quang from the Central region).

Start off your trip right and experience BBQ Viet style.   5ku Station is a raucous open air pub where platters of raw pork and seafood are presented for you to grill on a table top spit. It resembles any trendy restaurant in LA — from its booming hip hop soundtrack to its graffiti covered walls.  The proteins here are marinated in fish sauce, lemongrass, garlic, shallot and you will sweat meat for days, but it’s so worth it to enjoy one of the truest Vietnamese experiences of “nhau,” or communal sharing of food and beers.  This district 1 tavern is open well into the wee hours of the morning, so it’s great if you’re getting in late.

Food brings people together, and nowhere is that more obvious than in this country.

If you can’t sleep right away after your gut bomb, stroll around the neighborhood boulevards (remember Vietnam was colonized by the French, so the city planning shows) looking at the colonial villas intermixed with modern apartment buildings and hotels.

Highly recommend staying in hotels while in Vietnam, especially some of the more historically famous.  It’s pretty cheap comparatively and you get a huge buffet breakfast with an array of Vietnamese specialties.  Hospitality is known to be tops in Vietnam and boy do they love tourists.  Do not miss Banh Xeo (savory turmeric flour crepe with shrimp, pork and bean sprouts) and the omnipresent pho (which is an excellent hangover cure for your late night boozing the night before).

The city is split into 24 districts, and staying in district 1 was very convenient.  Take a morning amble around this area and you’ll run into a few of the most popular attractions right off the bat.  The Opera House was built in 1898 and it makes you feel as if you’re in Vienna or some other European destination.  There are always impromptu performances in the front area from students and musicians, and the theatre draws international acts like Cirque du Soleil.

Just across from this venue is the very famous Hotel Continental.  If you’ve read Graham Greene’s work The Quiet American, know that the idea was conceived in this hotel, of which he was a long term guest in room 214.  Because of its central location at the crossroads of two major streets, Hotel Continental was one of the favored hotels for politicians, journalists and businessmen to rendezvous. 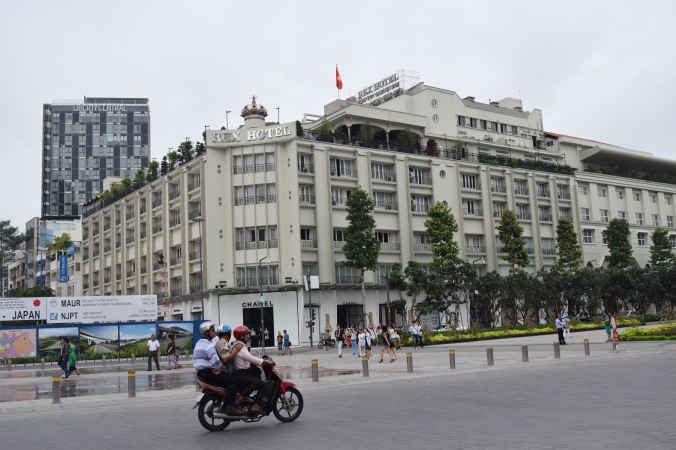 Another is across the street at Rex Hotel.  This hotel hosted American military for daily meetings at their famed rooftop bar, and you can still head up to the top floor for view and cocktail to this day. 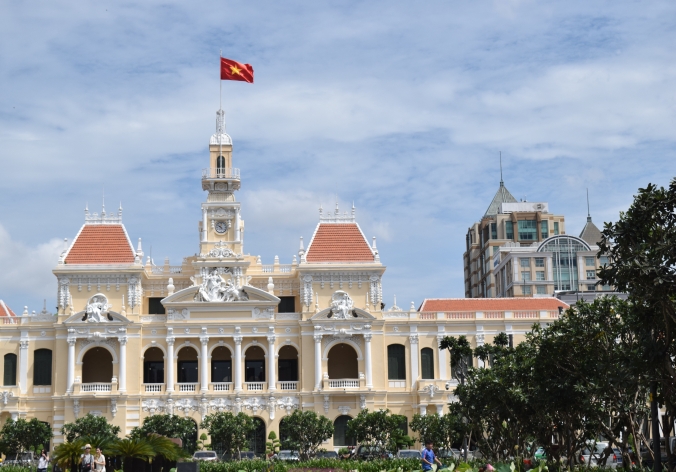 In between these two hotels is the HCM City Hall.  On Dong Khoi street leading to this governmental building are some of the world’s most stylish fashion houses, from Chanel, Hermes, Christian Louboutin, etc., a shopper’s paradise. 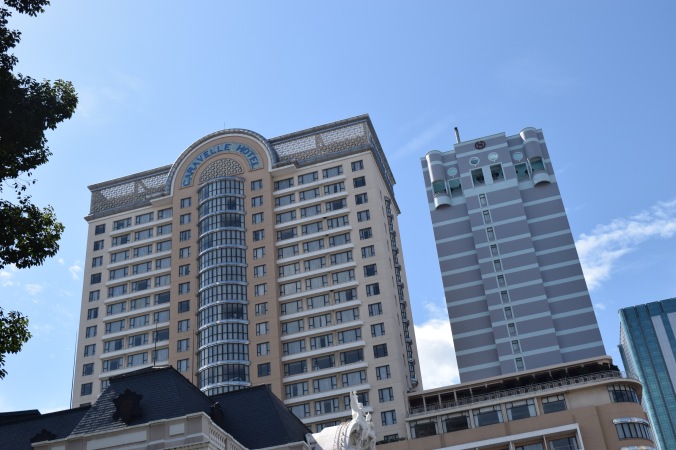 Last stop on the historic hotel tour is yet across the road again, at Caravelle Hotel.  Formerly the tallest building in Saigon, this hotel was made famous by Walter Cronkite, who broadcast from here during the war.  There’s another famed bar in this hotel, the Saigon bar, a great place for a libation.  Sensing a theme here?

Make your way over to the post office in the middle of District 1, the Saigon Central Post Office.  That’s right, one of the top attractions in this city is the post office.  What is usually a mundane building is really grand, probably one of the nicest examples of French colonial architecture in Asia.

This is located across another grand landmark, the Notre Dame Cathedral Basilica, a Catholic pilgrimage site as the cathedral was said to have shed tears at some point.  For a communist country, the prominence of such a religious building cannot be understated. 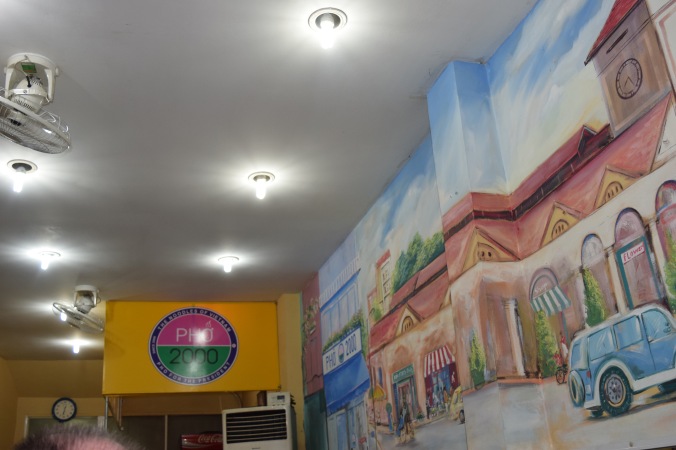 By this point, you’re going to want to grab some grub, especially after being tempted by tantalizing smells throughout town.  A notable restaurant is Pho 2000, where you can enjoy a steaming hot bowl of pho or any other specialties like fried summer rolls, bun thit nuong or banh hoi (vermicelli with grilled pork dishes).  Its claim to fame is that President Bill Clinton dined here during his visit in you guessed it, the year 2000.

If you must, you can eat here.  However, as a Vietnamese person, I’m going to tell you that there are far better options.  I mean, the Coffee Bean located downstairs is a better option.

Actually, if you’re in this neighborhood, the best option is to go across the street to Cho Ben Thanh.  This enormous marketplace is filled to the brim with textiles, souvenirs, spices, fruits and in the center of it all is a huge food court.

Have a bowl of porridge (Chao), glutinous rice pouches filled with shrimp (banh bot loc), the aforementioned banh xeo, nem nuong (grilled pork meatballs) and don’t forget dessert puddings (che).  You can spend a few hours here just leafing through all the stalls, but head out to the streets to really experience the flavor of the city.

There’s book street, Nguyen Van Binh, in District 1, a pedestrian street filled with bookstores. Le Cong Tieu Street which has all the antique stores of your dreams (still pricey though, they, like dealers in the US, know their audience).

Just around the corner from Antique Street is Cho Cu (Old Market), one of the many open air farmer’s markets offered by this city.  Tucked away down a narrow alley is Anan restaurant (Eat, eat), a Western fusion gastropub with an enviable rooftop bar.

Nighttime in HCM City is a must experience.  Everyone comes out at night, you’ll see scooters and motorbikes galore, and you’ll hear them beeping too.  All the monuments and buildings are lit up in the city center like Time Square, and you’ll see dozens upon dozens of young people filling bars and cafes.

Speaking of coffee…next morning, you’ve got to take part in the ritual that is people watching at cafes.  This is more Vietnamese than any other activity.  There are a ton of recognizable names in the game: Starbucks, Coffee Bean, but a well known Vietnamese chain is Trung Nguyen and they have several cafes throughout the city.  Vietnamese coffee is some of the most robust roasts you’ll ever taste.  Forget Red Bull, this will give you wings.

Spend your morning jogging along the Saigon River.  It’s a serene, underutilized area and usually not too touristy.  You’ll get a great view of the city’s formidable skyscrapers like the Bitexco Financial Tower and Vinacom Center.

You’ll pass the Majestic Hotel, another famed hotel built in the opulent French Riviera style.  Maybe even pick up a pastry from Brodard Bakery on your way back to see more historic sites.

Some people are interested in the hidden tunnels used during the Vietnam War by the Viet Cong.  There are many tour operators that offer Cu Chi tours which is can be an interesting way to spend a half day.  I find the thought of being trapped in an underground bunker a little claustrophobic, so to get the Vietnam War history on, get yourself to the Reunification Palace (or Independence Palace).

This is the former home to the Southern Vietnamese Republic’s president.  It appears to be in great shape for having been attacked during the war (a tank crashed through the gates).  Pay a small entrance fee to gain access to the palace, whose contents have remained mostly untouched, including the basement war rooms.

There is a fair amount of history regaled here, but as the Viet Cong won the conflict, the information in this museum is obviously presented from their standpoint.

Before leaving on your next adventure in Vietnam, make sure you get an authentic as authentic gets meal.  Nothing is more Vietnamese than a big ole plate of broken short-grained rice, especially if it’s topped with a charbroiled pork chop, fried egg and shredded dried pork.  Com Tam Ba Ghien serves this up and more for an affordable eat that you’ll remember forever.