shooting at the walls of heartache, bang bang, I am the warrior

When I was living in Northern California, I went to Oakland all the time.  But I’ll admit, most of those excursions had been to attend the Alameda Flea Market.

What? This should be no surprise, I’m ancient.

I have, however, attended games at the Oracle Arena and Oakland Coliseum, so in light of the Warriors hosting another Finals appearance starting with Game 1 tonight, here’s some tips for those heading to the games.  See, I had to be equal to Cleveland — I’m Switzerland in this battle, I’m just here for good basketball.  Of course, it may be cheaper to literally buy a game ticket, plane ticket, hotel and rent a car to go and see the NBA Finals in Cleveland…because tickets to see Steph and Co. at home are, as they say in NorCal, hella pricey.

Oakland definitely in the house…

An SAT analogy:  Oakland is the San Francisco, as Brooklyn is to New York City.  Like, in a West Coast way, in its laid back vibe: lots of art, community, ethnic flavor.  It’s got an unfair reputation, I think. Yes, there are definitely more sketchy parts, but there’s a very huge community spirit and social awareness as a whole.  Hopefully that mindset won’t slowly disappear as all of the SF people push themselves into Alameda County to somewhat escape the high cost of living.  OAK home prices are crazy leading to a lot of displacement.  But, that’s a socioeconomic discussion for another time.

As I alluded to earlier, the Alameda Antiques Faire Flea Market is one of the largest flea markets around and happens the first Sunday of every month.  This coincides with Game 2, so…plan accordingly.  I’m guessing the intersection in the Venn diagram between NBA fans and hardcore antiquers is larger than one would think.  I bet Lebron is into it, and you know Klay and KD are.  Not Kyle Korver or Draymond though.  You can legit find any antique here and there’s a ton of food trucks along the perimeter as well.

Oakland sits right across the bay from SF and just underneath Berkeley/Emeryville.  The Oakland airport (OAK) is super convenient if you’re flying to the bay area, and way easier to get to via BART (Bay Area Regional Transit).  The best way to get to Oracle Arena is actually via BART as the station will take you directly from the airport to the Coliseum station.  Avoid driving from the bay and BART it from SF (45ish minutes) or downtown OAK (25 minutes) to the arena to save some headache and cash ($40 for ample parking).

But, if you have a little time and want to explore the East Bay, rent a car and head towards downtown (yes, away from the arena).  Downtown/Civic Center has A TON of restaurants.  The best thing about Oakland (and the Bay Area in general) is the variety of food options. One of my favorite places is Burma Bear on 19th Street.  Very small, unassuming only-open-for-lunch spot with like seven menu items.  They are known for their tea leaf salad and BBQ plates.  So good and really cheap (only one menu item > $10).  Only open on the weekdays though, so if you’re weekending it, sorry you’re out of luck.

No visit to the Bay Area is complete without having some Chinese food right?  So if you don’t want to hoof it to SF, check out Shandong in Oakland’s Chinatown for huge plates of mouth-watering scallion pancakes, dumplings, and hand-pulled chow mein.  Or if you’re looking for new American gastropubs, try  Mockingbird, a nouveau American farm to table eatery.  You know the type — locavore, has a pork chop on the menu, some sort of confit and a lot of gin on their cocktail list.  Or if you’re really jonesing for Burmese (always comes back to Burmese for some reason), head to Telegraph Ave and seek out Burmese Superstar (way extensive menu of Burmese specialties including samusas, tea leaf salad, rainbow salad and curries).  There’s also locations in Alameda and SF.

Before you head to the game, make sure you see the Bay!  Answer the call of the wild at Jack London Square.  It is a interesting touristy spot that features a big marina with scattered shops and restaurants on the waterfront.  The USS Potomac, FDR’s former yacht, is located here.  It is a little sparse and reminds me a bit of Navy Pier in Chicago (and the SF Ferry building before they made it cool) as a place with real random attractions, but there’s a big farmer’s market on Sunday and there’s always people milling about.  The most notable shop there is a branch of Miette, the confectionary shop that is perfect pastel pretty.  JLS a nice place to walk around and kill some time for free. 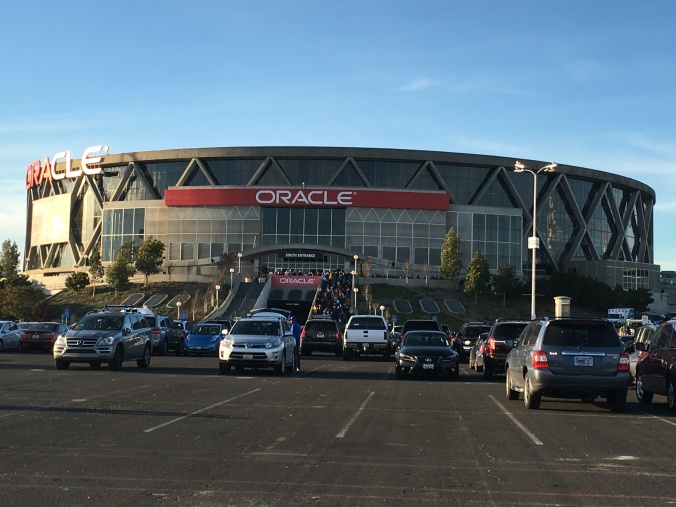 You’re going to want to get to the Oracle early because the lines can be really long.  It’s an old arena, like really old, but the staff is SUPER friendly, which is nice when you’re waiting in queues for everything from merchandise to food.  The food is not as good as say, AT&T Park across the bay (crab sandwich and garlic fries, anyone?), but there’s options.  Danger dogs, Kinder’s BBQ pulled pork sandwiches, banh mis, korean BBQ bowls, and Lagunitas beer.  Typical arena fare.  Or if you want a quick snack before or after the game, hit up the In-N-Out on the other side of the 880 (my friend once ran into Ayesha Curry there).  I will never not champion In-N-Out burger, California love, baby!

Dub-step around the concourse and take a gander at the Fan Shop and pose next to your favorite player.  And keep your eyes peeled, you never know who you could see…

Cleveland vs Golden State, a little bit like deja vu, a lot like another one for the ages.

Next week, I take on the Stanley Cup cities — stay tuned!