Not a region of Mexico.

There’s been plenty of news out of this country in regards to the dangerous conditions and crime, but what doesn’t get as much press is that it is a culturally rich country abutting the Caribbean sea that has white sandy beaches, temperate surf and colorful, friendly people.

Tropical the island breeze, all of nature wild and free, this is where I long to be…

The island of Roatan is the largest of three Honduran islands (Bay islands) and is a very popular destination for cruise ship travel. The main industry is tourism (American, Delta and United fly here from the US), and thus the people of this island are very protective of keeping the so-called bad elements from their island. 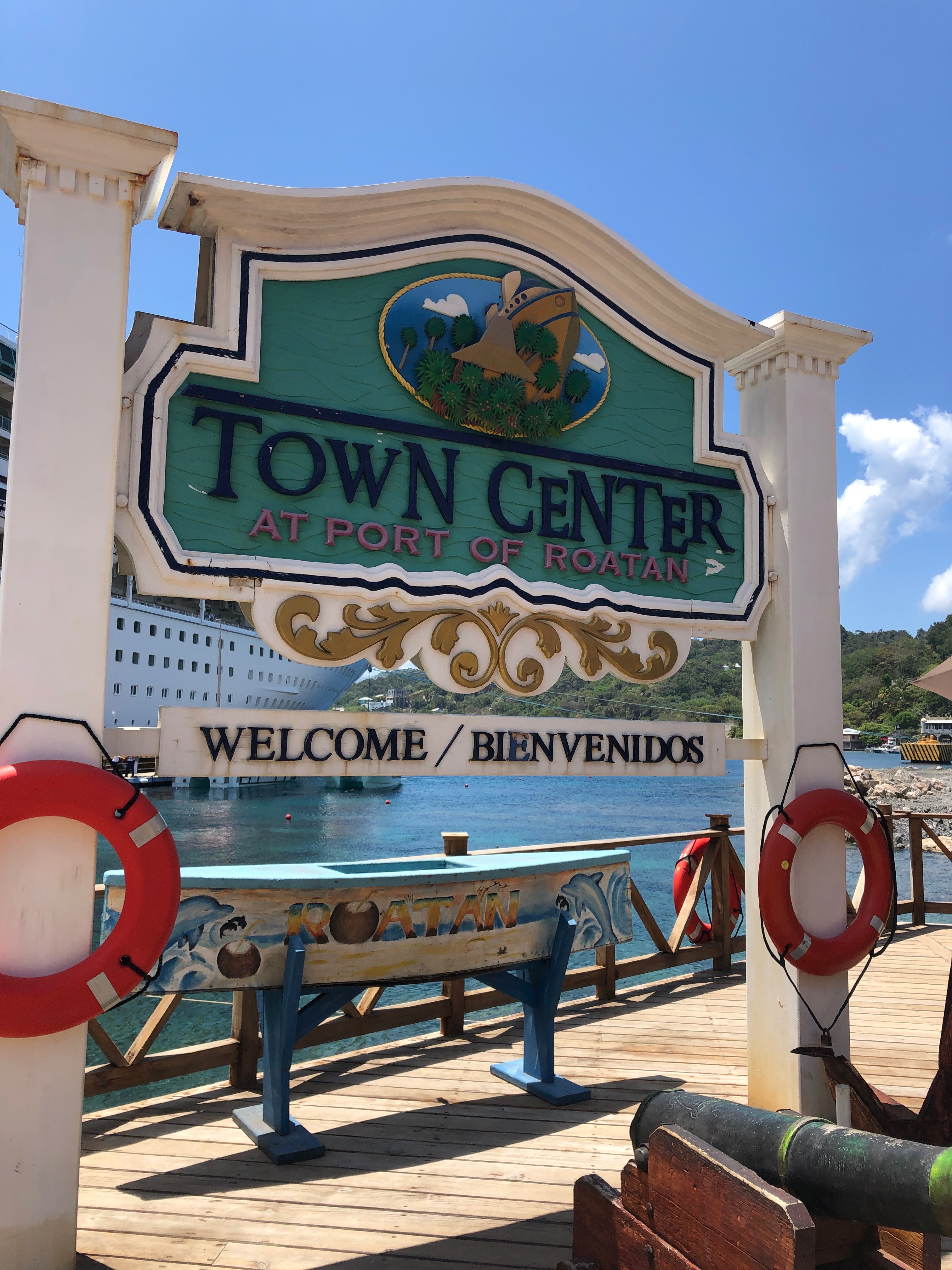 Largely under Spanish and British rule throughout its early history (also don’t forget the various groups of pirates, they don’t call it Pirates of the Caribbean for nothing), the island was rightfully ceded back to Honduras in the late 1800s. 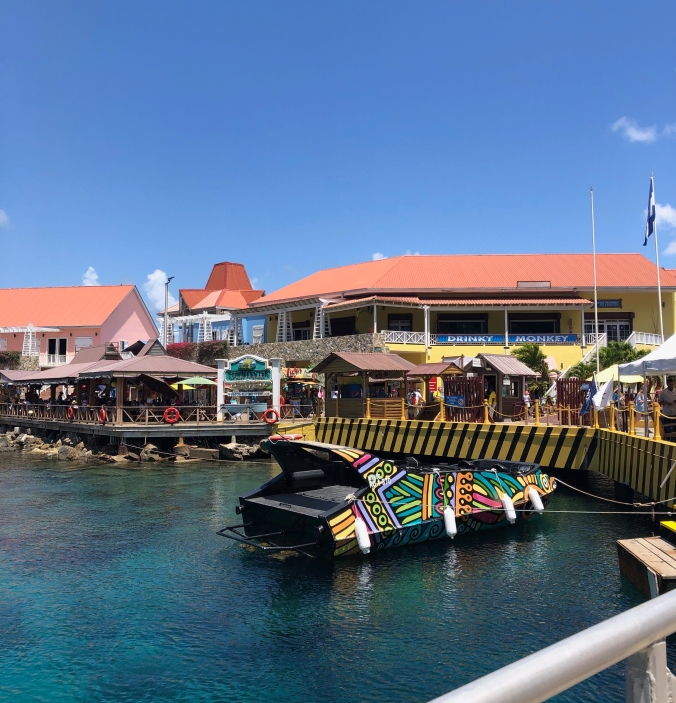 The cruise ship port is, of course, catered to tourists and has your ubiquitous Diamonds International, sterilized cantinas and bars and lots of people ready to take you around the island.   The tourism companies are fairly well established so going with a set tour company is very safe. I would only take a taxi at your own risk, you don’t know how much they’re going to run up your price (you should negotiate your price beforehand anyway) or if they’re going to deliver on their promises. I mean most likely they will, but you never know.

South Shore tours is one of the larger companies set up right at the port. We were very lucky to have a really knowledgeable and easygoing tour guide named Stanford who took us to do a glass bottom semi-submarine boat tour (if you don’t do one of these have you even travelled? J/k), West Bay beach, and to the highest point on the island. The problem with cruises is that the visits are very short, so you have to be efficient if you want to see a lot.

I’m not a big fan of the glass bottom boat (which can be found in Hawaii, Australia, everywhere in el Caribe), but the coast off Honduras boasts the second largest reef in the world, so if you don’t go snorkeling, this is a great alternative to see it. If you’re into diving and snorkeling though, do it! But when you’ve got a lot to see and time budget, these boats fit the bill. 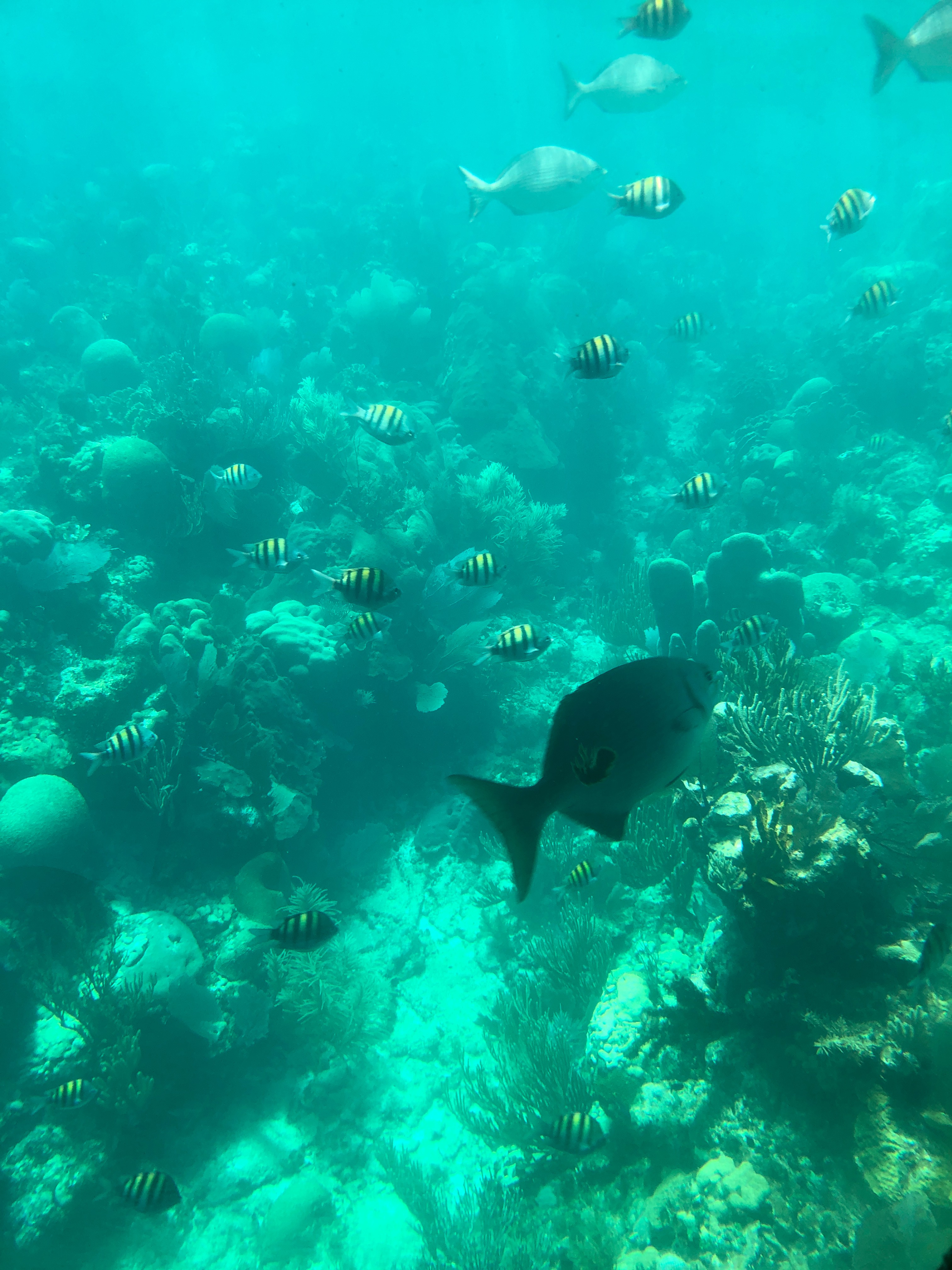 The reef is truly spectacular, lots of schools of French angelfish, Blue Tang (yes you can find Dory), Sergeant Majors, groupers and parrotfish, etc. The sunshine illuminating the reef is a Technicolor under-the-sea dream. You half expect Sebastian the crab to start singing. If you thought I wasn’t going to make a Little Mermaid reference then you haven’t been reading this blog for very long.

These rides only take about 40 minutes even though you’ll want to spend the whole day in this water world. 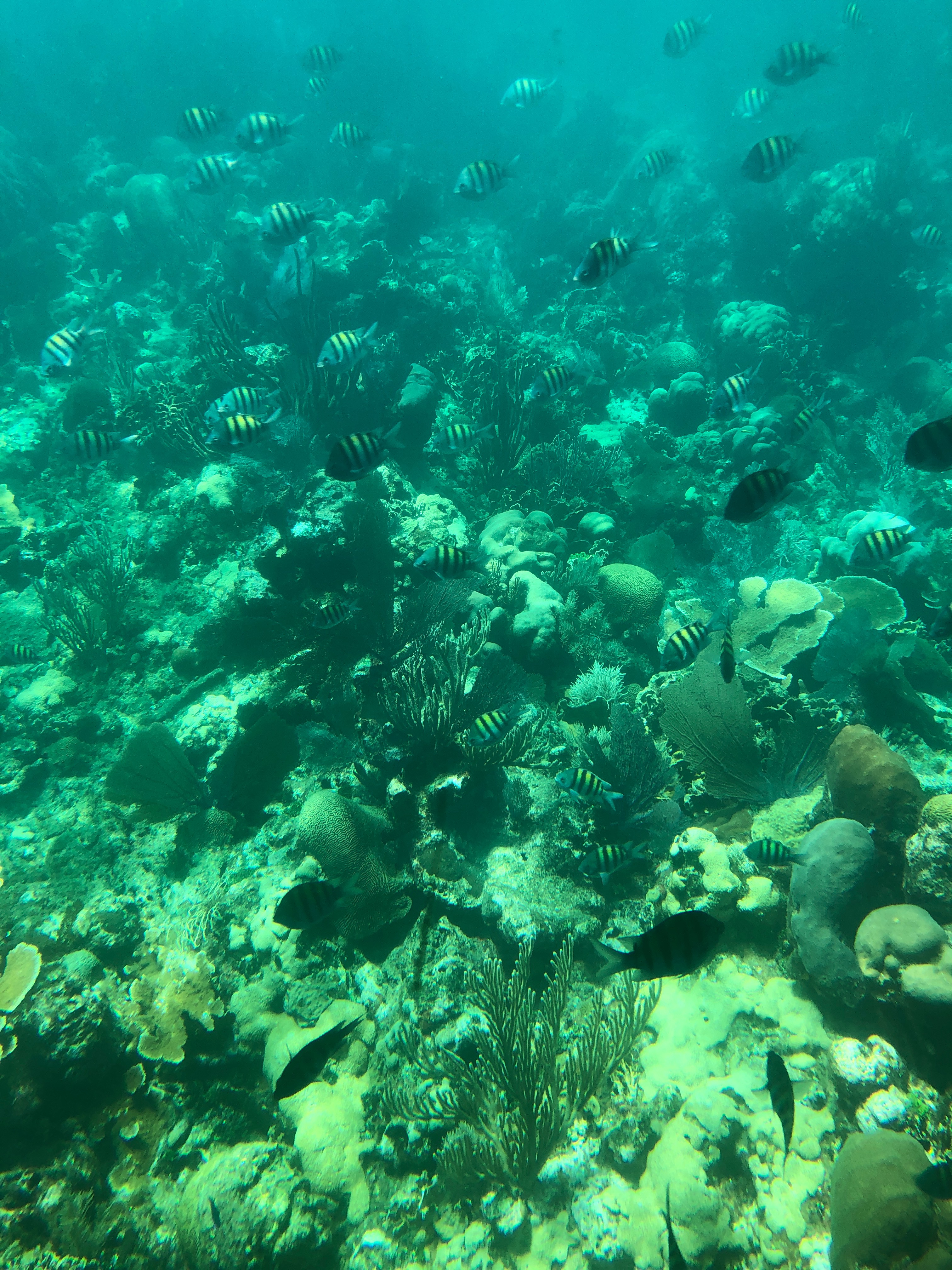 Now I am not a beaches and sand vacation person perhaps because I am from Southern California, but I have to admit Caribbean beaches are some of the most beautiful. Yeah there’s French Polynesia/South Pacific, Mediterranean, Indian Ocean beaches, but I think it’s the island life vibe of the Caribbean that really give you a Bobby McFerrin vibe. Sipping on a pina colada, listening to some steel drums, it can’t be beat. 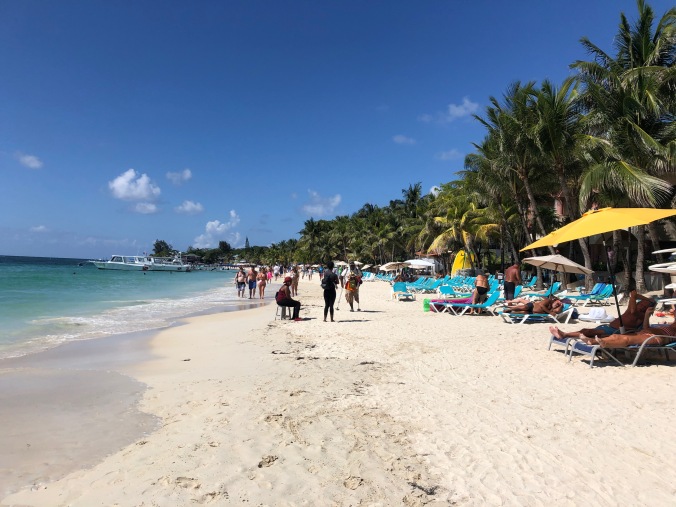 West Bay is arguably the best beach on Roatan with its white sands stretching for miles. The water is very warm and other than the hawkers trying to braid your hair and sell you hammocks, it is very peaceful. There’s very high end resorts on this part of the island and properties that have definitely been on House Hunters International, mostly catered to expats and foreigners looking for a beach hideaway. 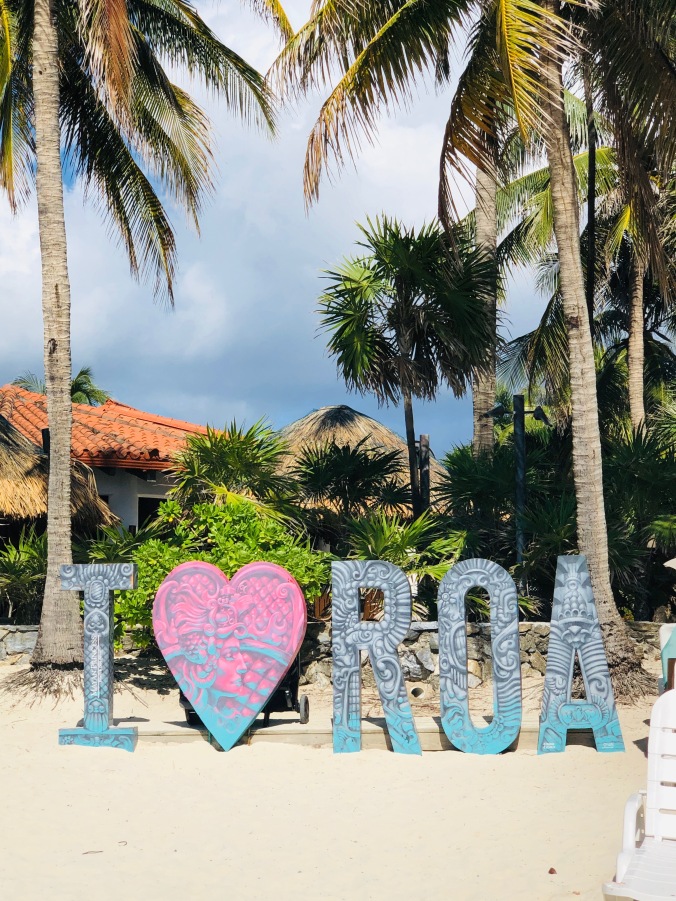 Touristy places are nice and all (I mean those coconuts won’t drink themselves), but I like to see the real innards of anywhere I go, and so our guide drove us towards the middle of the island where the highest viewpoint is. 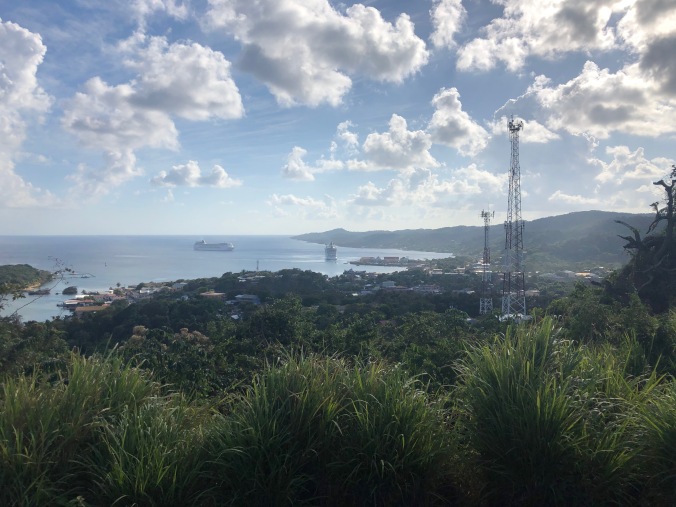 You have to drive through the largest settlement of Coxen Hole to get to this area, and it provides a glimpse of real life with its grocery stores and inexplicably multiple Bojangles restaurants. 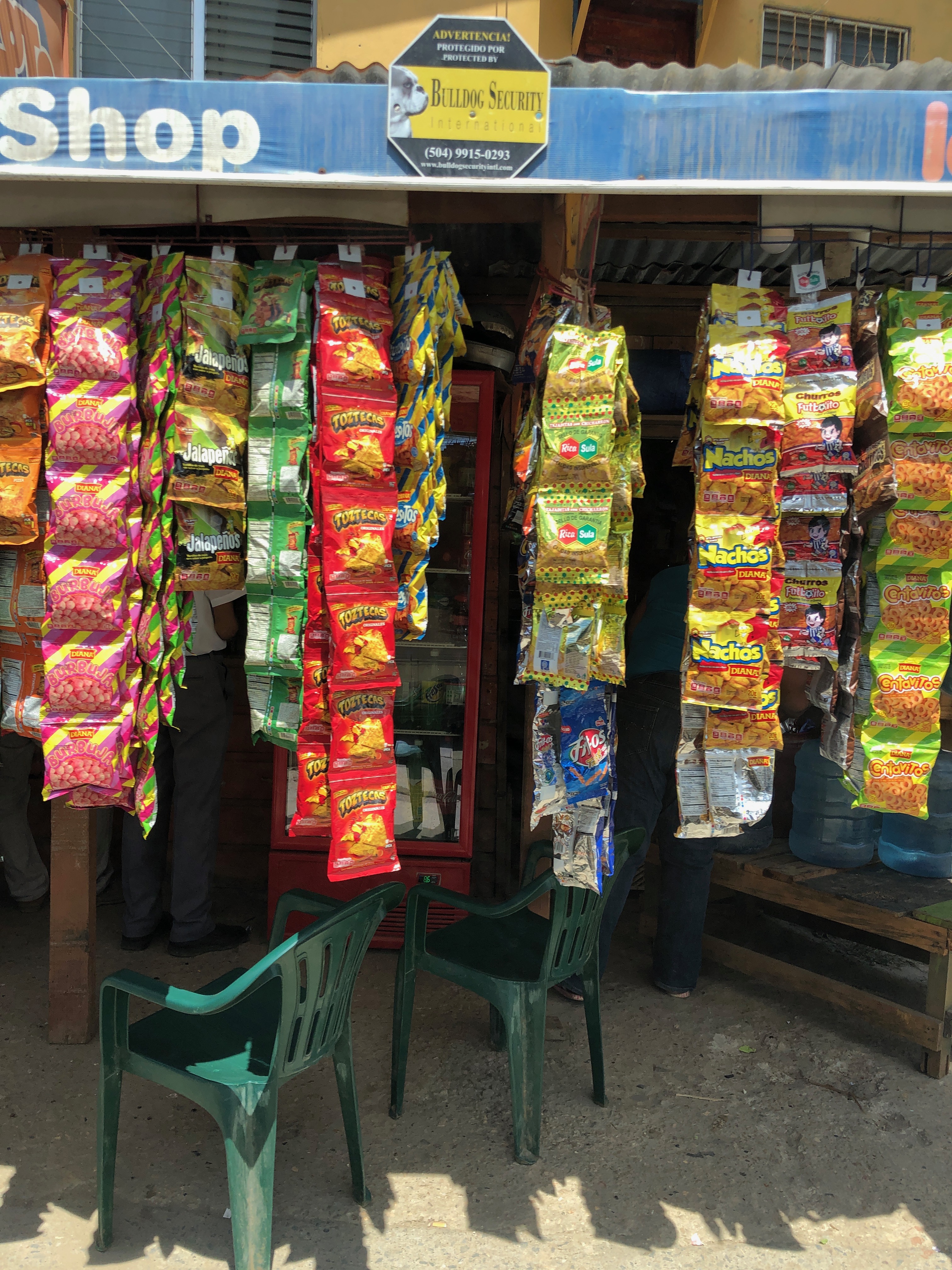 Speaking of, the specialty of the island is apparently Iguana soup, which is described as a semi-chicken like texture. The other specialty is of course, COFFEE. Coffee in Latin America is ace. You’re not going to find a chain purveyor like in the states, but there are some little kiosks set up in the port if you want to try. 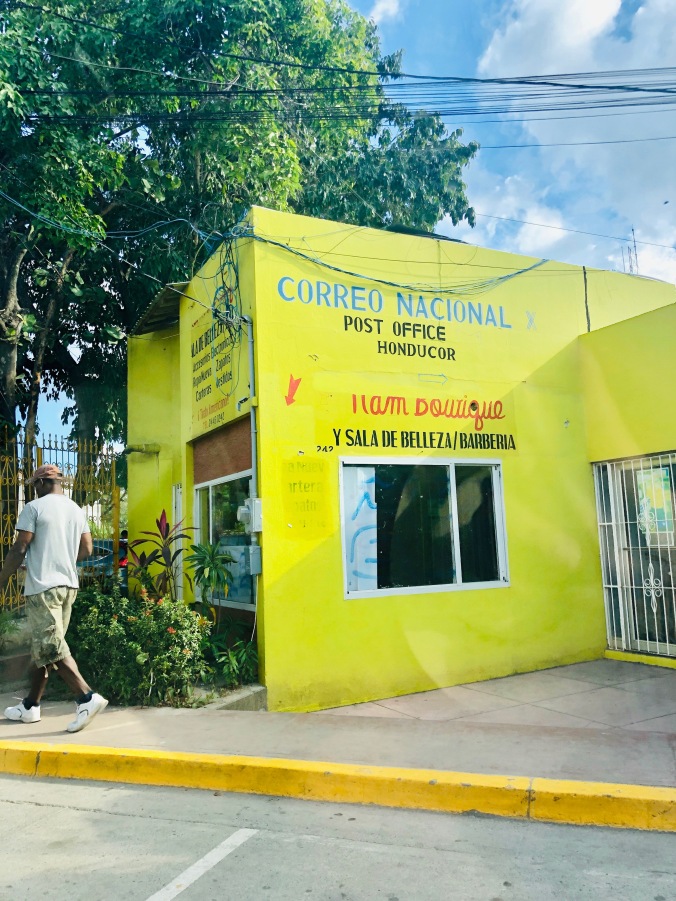 Souvenir shacks cater to the tourists who travel up to the viewpoint, but they’re not as in your face as what you’ll find closer to the dock. I will say of the ports of call, this was the most relaxing, tranquil and it was a great way to start the vacation.