One post obviously was not enough to cover the trip of a lifetime (literally, because the travel ban just happened a few weeks ago), so here’s a continuance of my very thoroughly journaled trip to Cuba’s capital city.

The one thing that everyone knows about Cuba is that there’s a ton of classic American cars.  After the revolution, the Americans fled in droves, leaving all of the material positions behind.  These classic cars are the cornerstone of tourism because everyone wants to ride in one.  There’s lots of 50s era Chevy convertibles and you should definitely start your morning driving around town for a very unique experience.

The Plaza de Revolucion is a very large public square where lots of rallies and addresses took place.  The most striking feature is the Jose Marti Memorial, a very large tower and statue of the man that is considered by all Cubans as a hero of philosophy and politics.  Around the square are government buildings with murals depicting more controversial figures: Che Guevara and Camilo Cienfuegos (a general in the revolution who championed education).  Not being intimately familiar with the revolution, I cannot comment directly on the perception of political figures in Cuba, but I can objectively say that Che Guevara’s likeness is represented more than others.  Fidel Castro famously did not wish to have his face on anything and there’s only one small bronze statue of him.

Drive along the Malecon and see the fishermen setting up shop in the morning.  You’ll pass the famed Hotel Nacional, where foreign dignitaries and celebrities (like Winston Churchill, Frank Sinatra, Mickey Mantle, John Wayne, Jimmy Carter and Barack Obama) alike have stayed.  Famously, Nat King Cole was not allowed to sing here because of he was black, which if you look around is an egregious example of pot calling.

About 20 minutes from the central city is a small neighborhood called Jaimanitas.  It is in this sleepy suburb that you’ll find the unexpected, a mosaic wonderland called Fusterlandia. 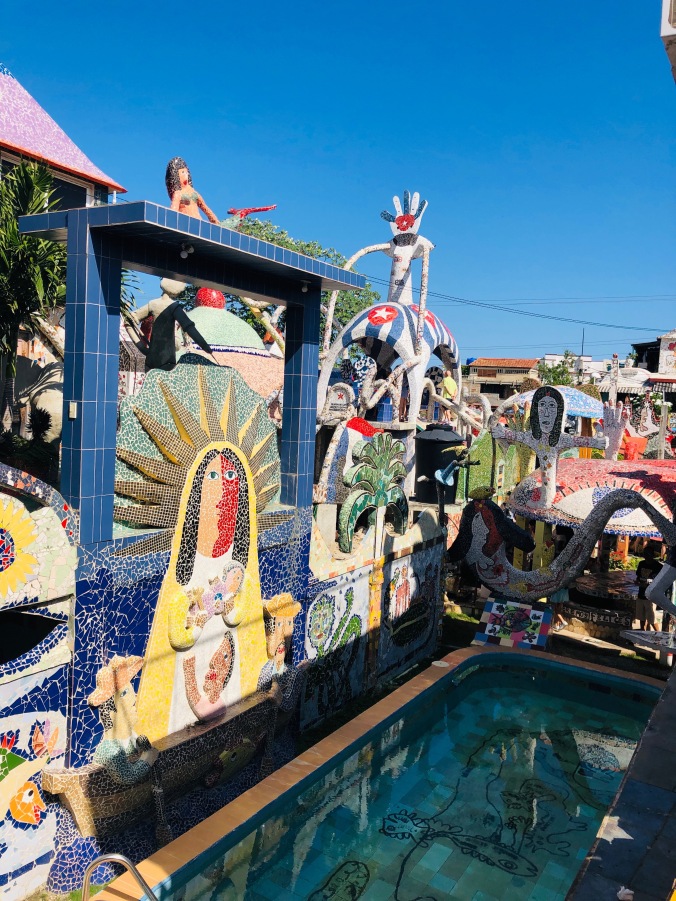 Jose Fuster is a renowned artist who works with mixed media to create these vibrant works of art all around his property and neighborhood.  It is reminiscent of Gaudi’s Park Guell, but with Cuban flare.  There are fantastical shapes and whimsical patterns all over the property, and there’s even a pet tortoise holding court.

Continue the sojourn into the Miramar neighborhood, where the upper class used to reside before the revolution.  Now housing embassies, there are beautiful properties lining the wide boulevards.  There’s even a North Korean embassy, which you don’t find in every country.  I don’t know what I was expecting about Cuba, because it was never represented in media or anything in the US, but it was not tree-lined European boulevards and bustling shopping centers.  Very cosmopolitan in some parts. 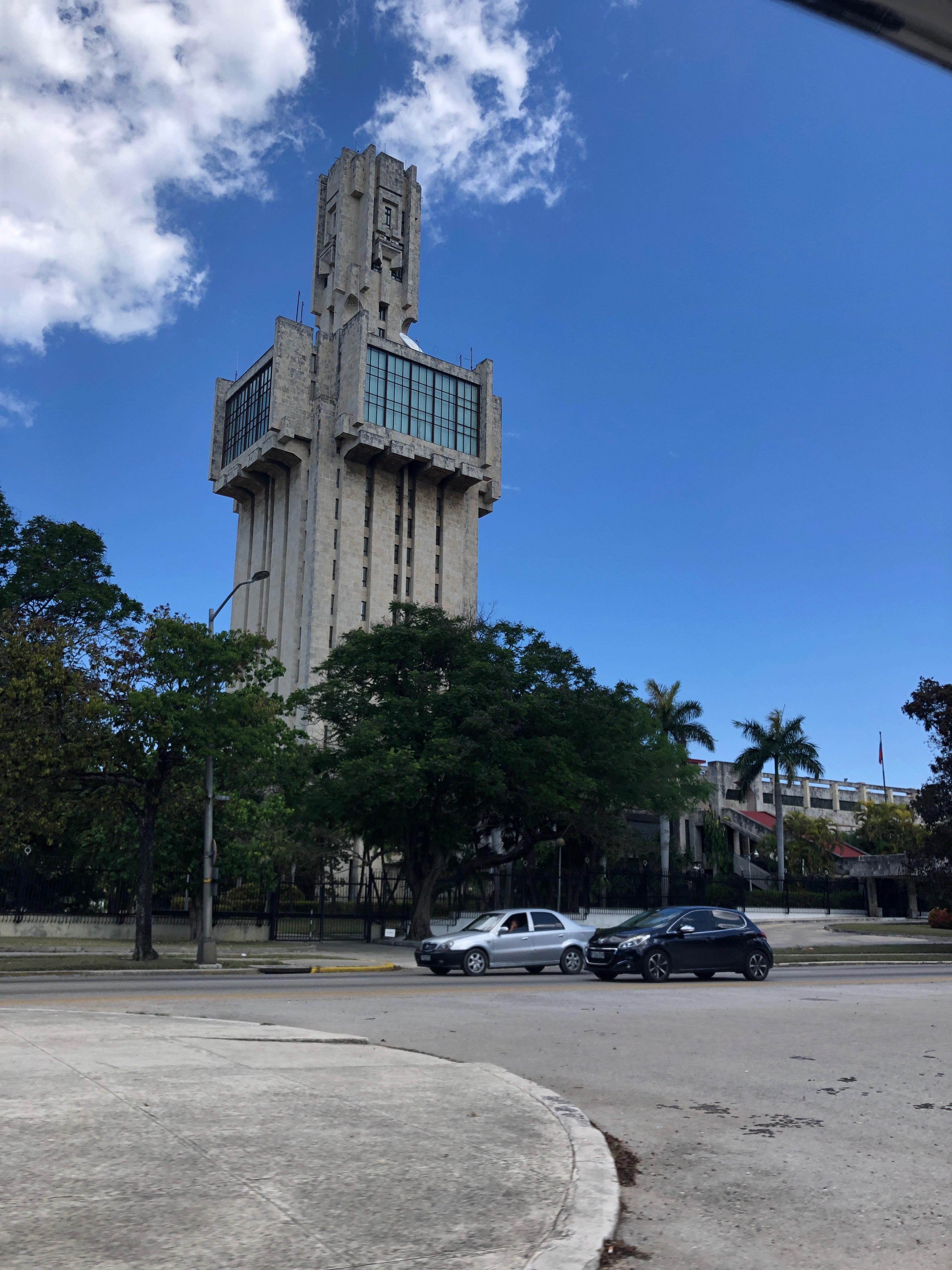 But, there’s also a central park like forest in this part of town, as well as a park dedicated to John Lennon.  By this time you’re probably getting hungry, so we stopped near the Christ of Havana for a bite at el Canonazo (very popular with tour guides, I’m guessing there’s a commission involved), which is a paladar (private owned restaurant) that serves large portions of delectable seafood. 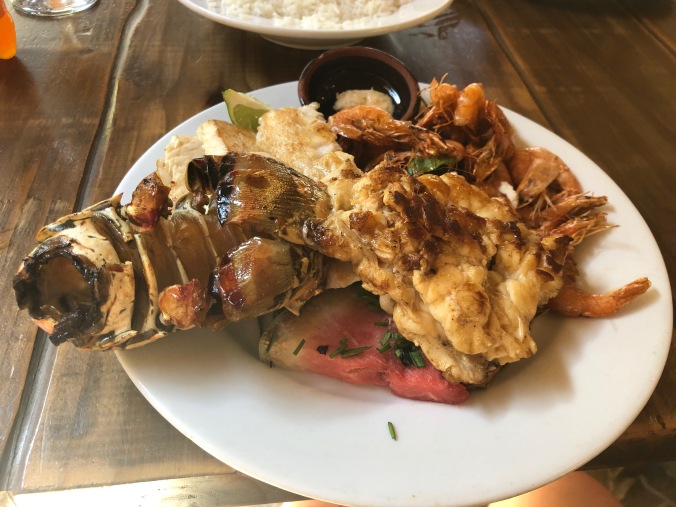 When in Cuba, you have to have lobster and all the seafood you can handle.  It’s delicious and obviously so fresh.  Surprisingly, they have American sodas because many are bottled in Mexico, so you can still have your Coca Cola Cuba Libre (sic).  There’s also no warning about the water quality here as in other countries, since the country has had sophisticated irrigation/filtration systems put in place years before the revolution.

This restaurant proved to be a convenient stop on the way towards Cojimar beach.  This quaint seaside fisherman’s village was where Ernest Hemingway docked his boat, the Pilar, so his imprint is all over town.  He was so inspired by this romantic hamlet that he wrote the Old Man and the Sea.  If you’ve not read it, it’s about a man who battles a giant fish only to lose it to a shark.  If I had a nickel for every time that happened to me… 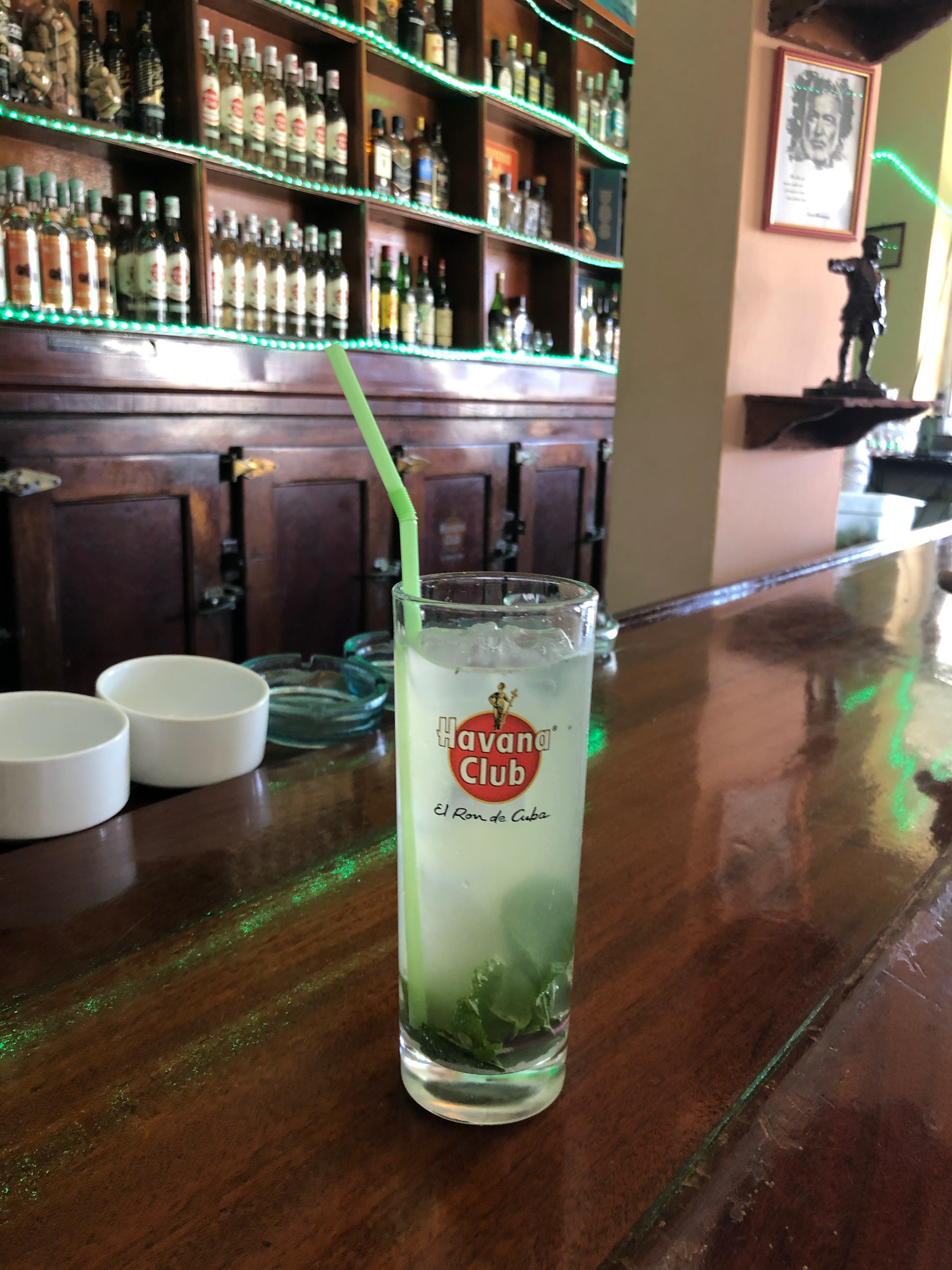 Hemingway, an avid sportsman himself, caught a giant record breaking marlin — photos of this feat can be seen in La Terraza (known in the book as the Terrace, very original), a former dive bar turned tourist attraction.  Have a daiquiri or two while perusing the collection of photos and Hemingway memorabilia that lines the walls of this establishment.

Remnants of the pier,  featured heavily in the movie based on the book, jut into the blue green waters just feet from a memorial to the author.  His effect on this region is indelible, and it is a little unexpected to see so much celebration of an American here. 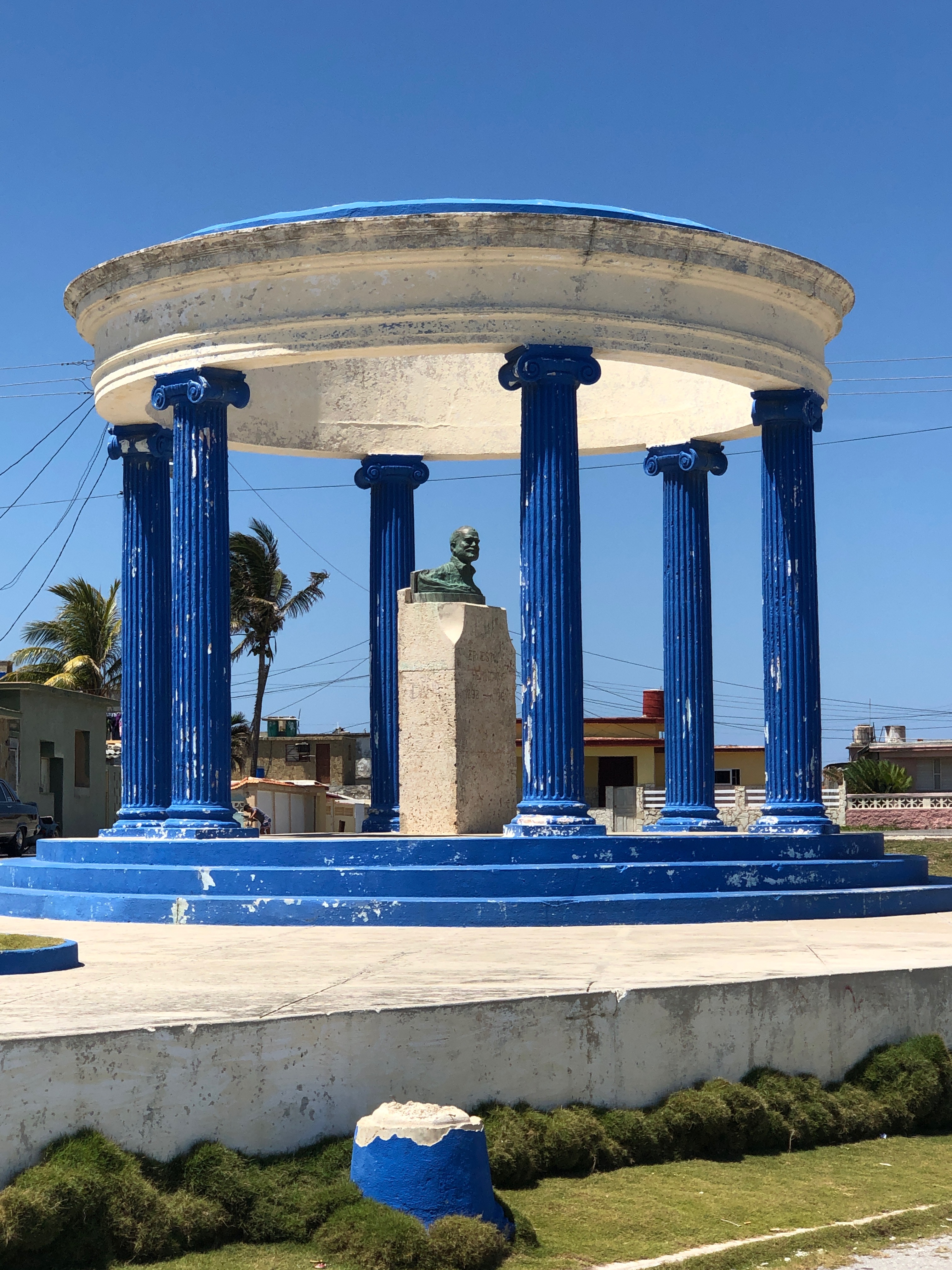 And your Hemingway tour won’t end there.  Back in Old Havana, you’ll want to be sure to visit the most famous of famous watering holes that he frequented, the lush.

El Floridita is perhaps the most famous (and the cutest little building you’ve ever seen).  Home of the daiquiri, this establishment leans into its Hemingway history with a bronze statue of the fellow taking up residence in the corner.

Around the corner is the Capitol Building.  Look familiar? It’s modeled after the one in Washington D.C., however it’s actually bigger by a few hundred feet.  This was definitely done on purpose. 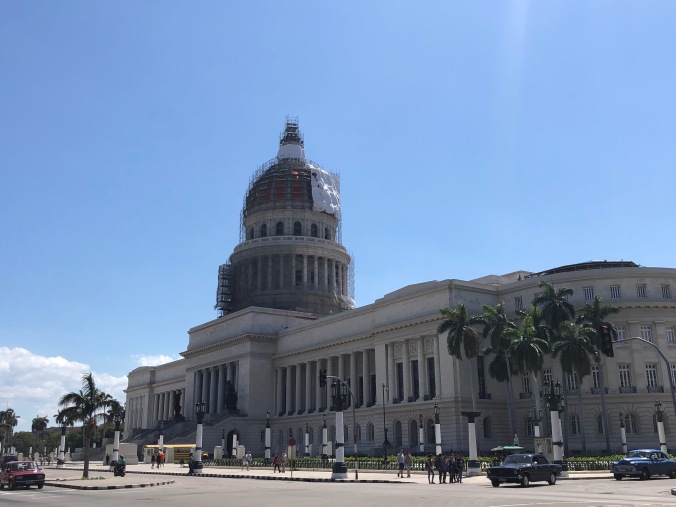 Quite possibly my favorite thing about this city is walking around to appreciate the gorgeous architecture.  And maybe the most enjoyable feature is that it’s done without distraction.  There’s internet here, but it’s state run and not really for tourists.  There’s no hotspots or Wifi or internet cafes.  Honestly it’s very freeing not having to check your phone every minute for texts and updates and posts.  There are modern comforts of course, but most of Old Havana is truly classic, and I hope they continue to preserve this for generations to enjoy. 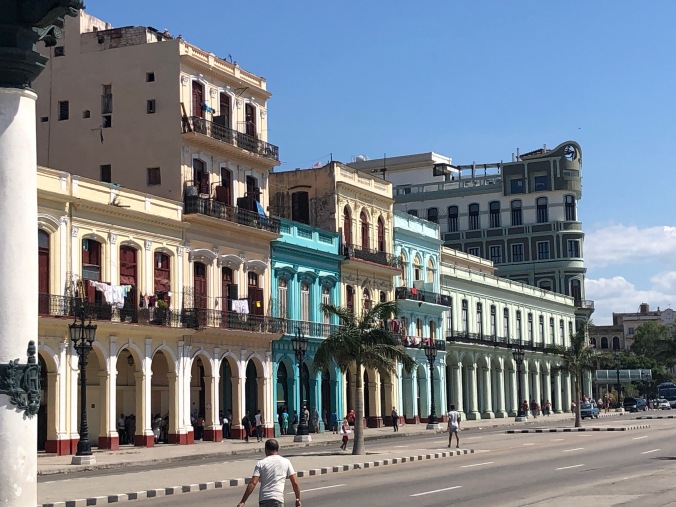 beyonce stayed in the green one

It’s a mix of all styles, European, baroque, Moorish (my favorite), art deco with a splash of Caribbean flare.  It’s like the most vibrant, picturesque collection of structures.  Case in point: the Bacardi rum building is a standout of art deco/nouveau style, the details are exquisite.

Like a Hemingway novel, this city is a cultural time machine.  It is colorful, stylish, cool, but firmly ensconced in rich history.

You could spend weeks here just strolling around the streets (very safe, btw), people watching, taking in all the sights.  Probably the biggest surprise is that there’s not a ton of street vendors crowding every corner like in other larger (more capitalistic) cities around the world.  I’ve been to other Communist/Socialist countries, and there’s screen printed emblems on every street.  Not here. There are small markets here and there, and of course the very large San Juan featured in my last post, but largely not a ton of things to buy as a tourist other than cigars and rum.  If you’re lucky and your eye is keen, maybe you might catch a few vestiges of Santeria, the traditional religion in these parts that is obviously not encouraged under Communism. 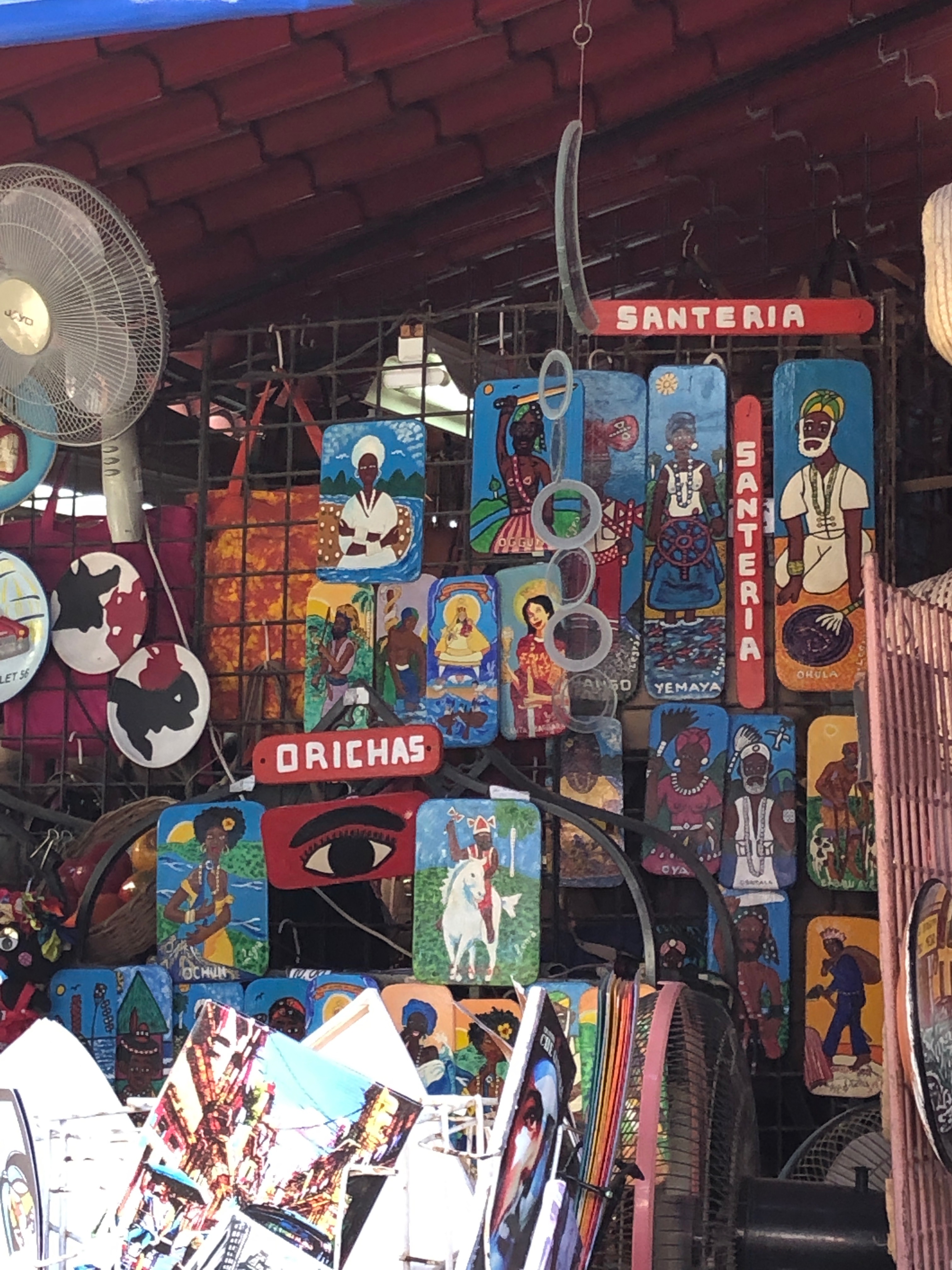 One last major Hemingway site before you go, La Bodeguita del Medio, one of the most famous bars in the world.  Known for their mojitos, make this a necessary stop to try Cuba’s famed inebriant.  You would be amongst good company, with Sting, Pierce Brosnan, Obama, Matt Dillon and Kevin Spacey (maybe not him) having imbibed here. 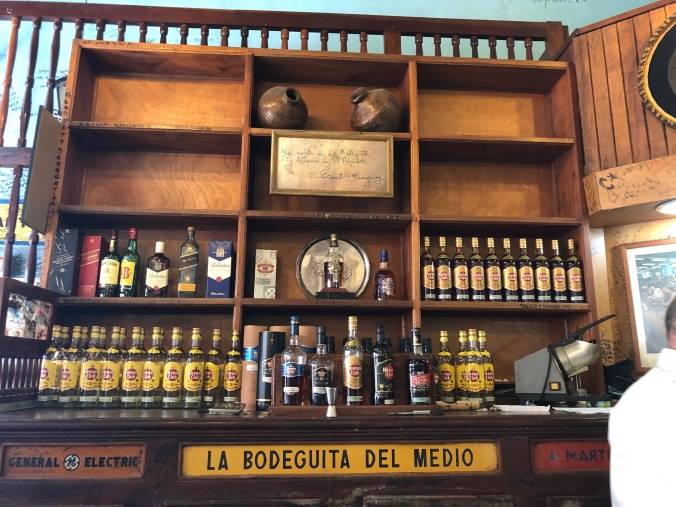 This was just an amazing trip.  So different from anywhere I’ve been, yet there was a familiarity with the people and the culture of which I became very fond.  It is very easy to become enamored with such a place.  I get you, Camila Cabello, I know why half of your heart is in Havana (ooh na na).