If you’re familiar with this blog, you may remember that I have not been to a Disney Park for 16 years.

Well I’m proud (?) to say that streak has been broken.

I was cajoled by my nephews (14 & 11) into going to D-land for the new Star Wars Galaxy’s Edge land that recently opened at the end of May.  This was a momentous occasion, and the really only thing that warranted a special visit.  I will say that not much else has changed at the happiest place on earth since I last stepped foot inside, and maybe that’s a part of its charm (especially for millennials).

may the force be with me…

I live ~10 minutes from the original Disneyland, which is why it may be surprising to some that I have not partaken in the park’s attractions for many years.  One reason? It’s now $159 for a one day adult ticket (!), the other is that it really takes quite a bit of effort.

That being said, I’ve been many times in my life when I was younger, so I am very familiar with the layout of the park   If you’re a novice, the best thing to do is download the app and familiarize yourself with your coveted attractions and map it out prior.  It is very doable in a day.  We were not interested in parades, shows or the fireworks at 9:30PM, so that cut out a lot of scenery chewing.  The way I do Disney is efficient and fast.  Ain’t got no time to wander aimlessly.  Pack a reusable water bottle, some light snacks, sunblock/hat, light sweater because it’s gonna be a long day.  No glass receptacles, selfie sticks, chairs/tents allowed.

We started our sojourn very early, getting to the Mickey & Friends parking structure at around 7:15 AM (opens at 5:30 AM), so that we could hit the ground running.  $25 to park the whole day, which is a deal by Disney standards.  The trams will take you right to the gates so that when the magic hour of 8 AM strikes, you’re one of the first in line to enter the Magic Kingdom. 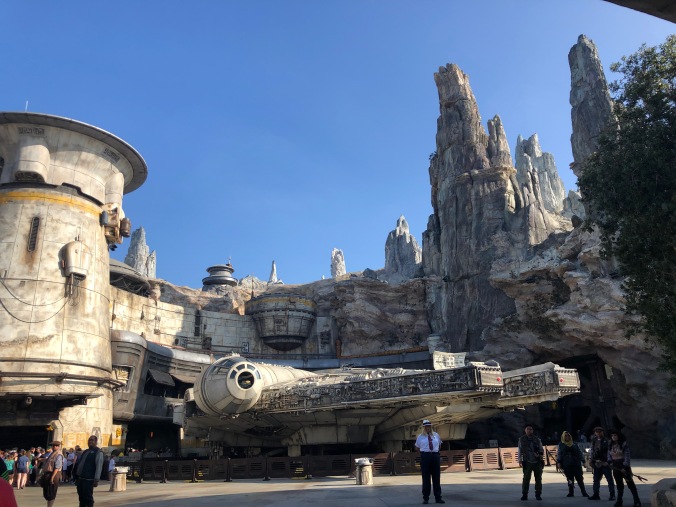 Even after the park opened, the lands were all cordoned off for at least 15 minutes.  Castmembers will then ceremoniously unlatch the barriers and off you go.  We went straight to Star Wars Land, which is accessed by going into Adventureland around Rivers of America/Frontierland, via New Orleans Square and Critter Country.   This new 14 acre expansion transports you to the village of Black Spire Outpost on the planet, Batuu.  Yes, I had to wikipedia that. There’s Oga’s Cantina, famously known for being the only place you can buy alcohol in Disneyland, lots of stores where you can build lightsabers ($200), droids (~$100) and a marketplace that looks suspiciously like a souk in Morocco. 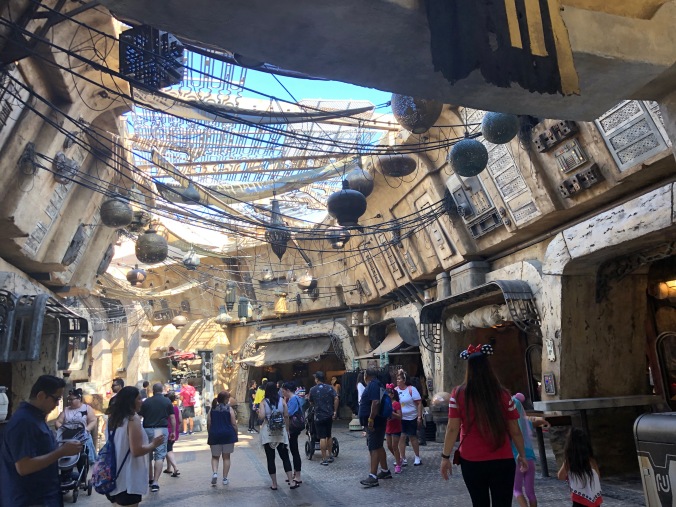 The Disney imagineers really put a lot of detail and planning into making this a fully immersive world.  The geography is based on the Petrified Forest in Arizona, so it’s very picturesque and transportive.  Beyond the obvious accuracy to cinematic detail, it’s very attractive from a visual standpoint, and well thought out, from the light fixtures to the trash bins to the bathroom stall doors, it’s all Star Wars, baby. 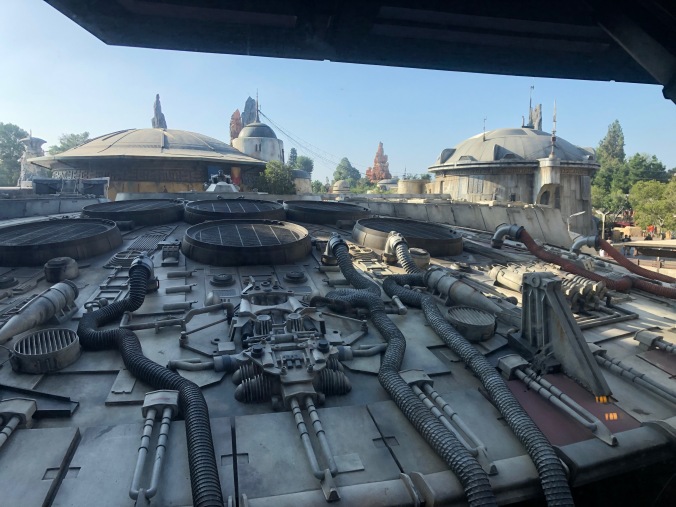 if you ever wondered what the top of the millennium falcon looks like, wonder no more

The main attraction is Smuggler’s run, a high octane, fast paced “ride” through the galaxy.  You can’t miss it, it’s next to the gigantic Millennium Falcon replica.  Since we were one of the first in the park, the wait was completely bearable and not up to several hours like you may encounter for the rest of the day.

had to wikipedia this guy: hondo ohnaka

As a person who doesn’t know much about Star Wars, I will say this ride is cool as hell.  You’re with a group of 6 in total, and each person is designated a role in the spaceship.  There’s a pilot, co-pilot, two gunners and two engineers.  I was a gunner and that basically involved me button mashing and screaming at my nephews, who apparently are not ready to drive cars based on how many times they crashed into space trash and obstacles. 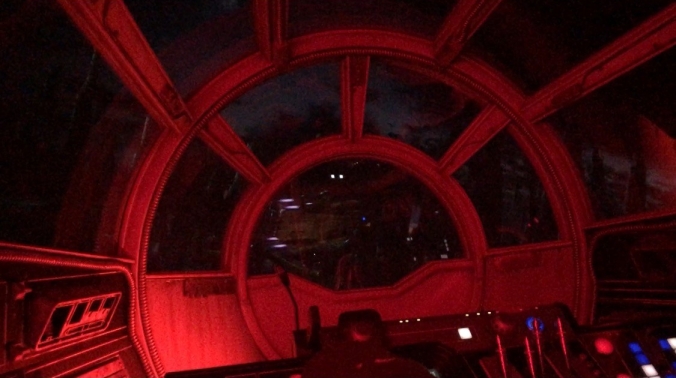 The objective is to retrieve a canister of Coaxium (whatever that is) for your “secret mission.”  I don’t know, but going at hyper speed is pretty damn amazing and the motion simulation is top notch. 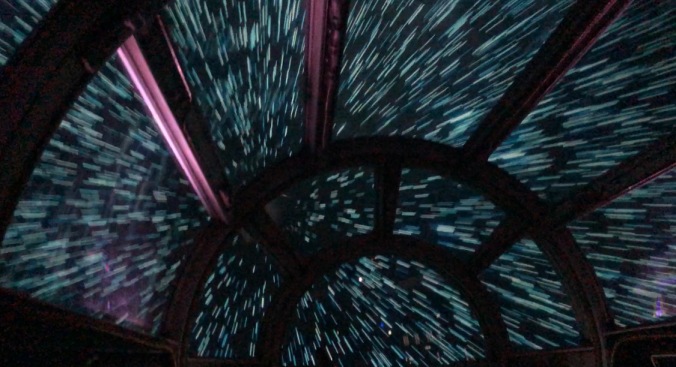 to infinity and beyond…wait a minute

There’s supposed to be another attraction opening at the end of the summer, Rise of the Resistance, but for now Smuggler’s is the only ride in the land.  There’s a milk stand (that’s literally its name, imagineers phoned that one in) where you can get green and blue milk (which tastes like bubblegum and passionfruit to me) and there’s a lot of interaction with Storm Troopers and everyone’s favorite hirsute giant, Chewbacca! 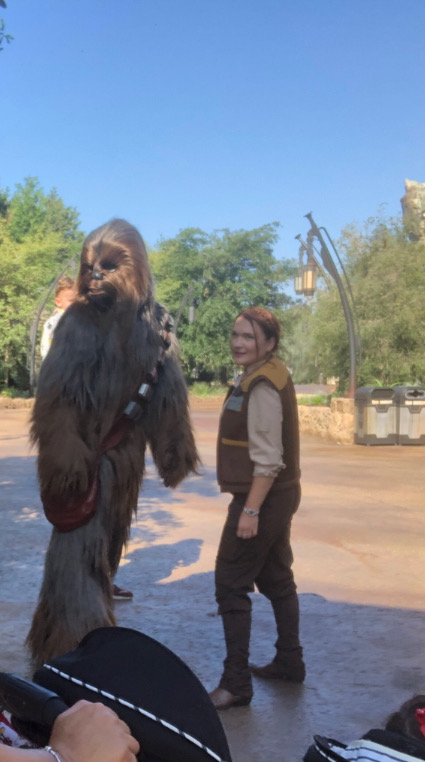 Next stop was back to Frontierland to Big Red Thunder Mountain Railroad, my favorite ride in the park.  Fast, twisty, blackouts, rickety rolls (not to be confused with Rick rolls).  Love it. 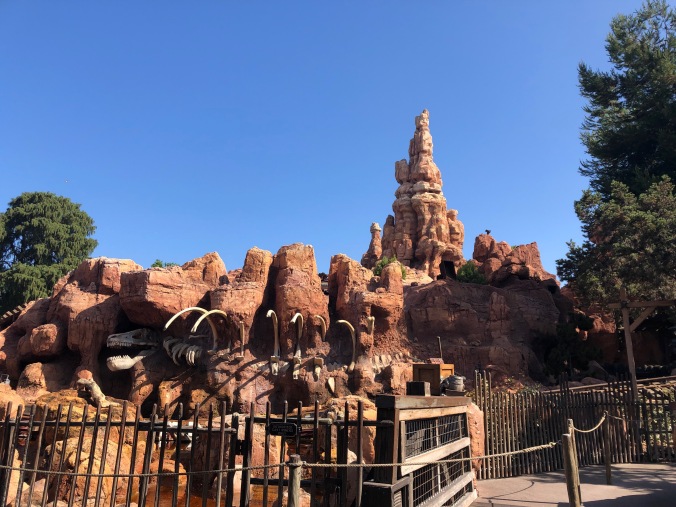 And if you time things right, you head next door to New Orleans Square to hit up Haunted Mansion and Pirates of the Caribbean (favorite ride, I mean it this time) all before 10 AM.  I prefer the old Pirates before they added Jack and took out the men chasing the women, but I’m a Disney purist.  At least they left the dog with the keys.

i dare you to not get yo ho, yo ho a pirate’s life for me stuck in your head

From there is a quick skip and a jump to Splash Mountain, which typically does not have long lines in the AM, when people don’t want to get wet. We literally walked directly onto the ride, so take this opportunity, it’s usually an hour wait +. Take your socks off and put them in the ziploc bags that are provided, and you’ll be good to go for the rest of the zippity doo dah day. 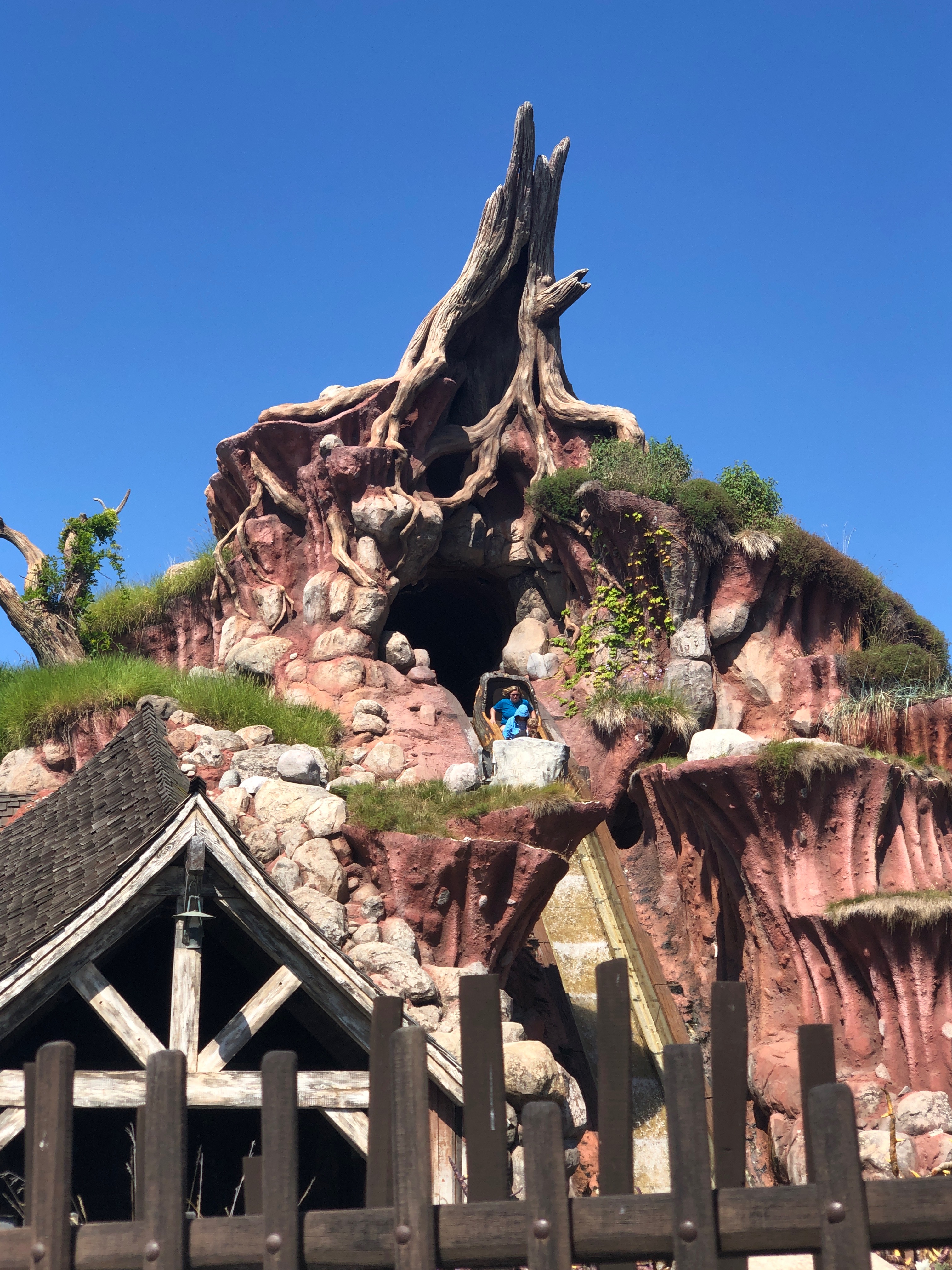 Indiana Jones is always pretty crowded, so you may want to burn a fast pass.  The Disney parks app is super useful and easy to see which attractions had waning wait times, so we actually didn’t wait long.  Stopping for a dole whip is a must at the Tiki Bar…or you can take a full respite at the Enchanted Tiki Room (not gonna lie, the animatronic birds freak me out).

I’m not a fan of the Tarzan (formerly Swiss Family Robinson) weird tree house, Tom Sawyer island, rafts, canoes or the Mark Twain Riverboat, so that’s a pass for me, but if you’re into that, good news, there’s never any wait!

Now, we took a backtrack to Galaxy’s Edge because my nephews wanted to try some of the food options, but normally I would have eaten in New Orleans Square.  Blue Bayou, Cafe Orleans are great because there isn’t that much Creole food in Orange County anyway and it’s a little upmarket and fancy.  You’re already spending a ton, so you might as well try some interesting fare.  My favorite little place is Mint Julep bar, where you can get Mickey beignets!

But, I digress.  We ate at Rondo Roasters, which has these pitas filled with a longanisa/lap xuong-chong type sausage, roasted pork and cole slaw for ~$12.  They’re pretty good, if at least texturally interesting.  The aforementioned blue milk was a bit too creamy for my taste, so we bought a couple of the special Coca Cola grenade-like Star Wars bottles that can only be found at Galaxy’s Edge.

That’s the other thing that gets you, there’s a lot of merch that is specific to Disneyland.  Special editions and what have you.  Around lunch time, there’s more interaction on the stage with storm troopers calling out people for being rebels and such.  There’s also an appearance by notable baddie, Kylo Ren.

Fully stuffed, we headed to Fantasyland to digest.  Do not do the teacups after lunch. 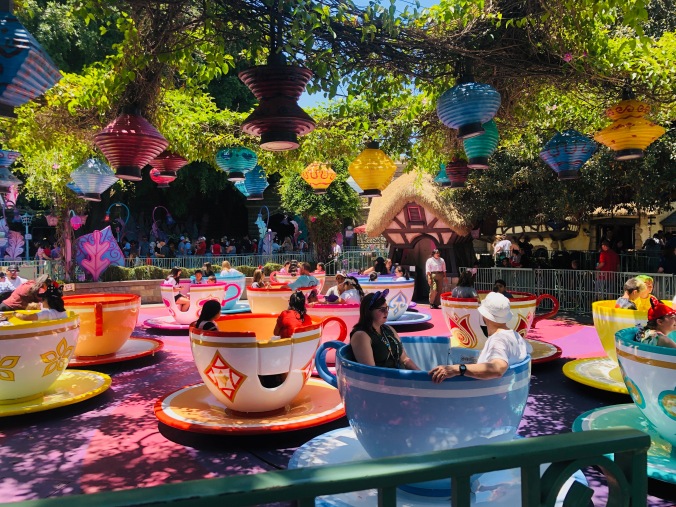 This is where we hit the slew of “baby rides,” which I’ve now come to realize are more frightening morality rides.  Mr. Toad literally gets sentenced to hell for a DUI (aka his ‘wild ride’). All of Pinocchio is horrifying, especially the boys making asses of themselves, literally.  And the weirdest one is Snow White, where there is no resolution, it just abruptly ends with the dwarfs searching for her in the dark forest.

We did not hit Peter Pan, which is arguably the best ride, because the wait is always long and I once got stranded where they had to turn on the lights thus ruining it for me forever!  Even though it’s not my specific cup of tea (pun intended) Fantasyland is great for little kids: Dumbo, the Alice in Wonderland caterpillars, the Storytime boats, King Arthur carousel.  My favorite shop is there too, the Bibbidi Bobbity Boutique.  There’s also a lot of characters roaming around, from Captain Hook, Peter Pan, Merida, Alice…they’re all roaming about. 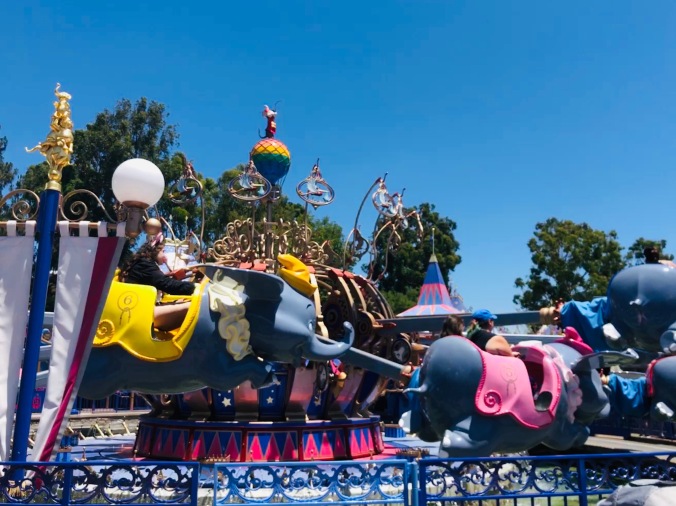 But being there makes you wonder, how come Cinderella, Hercules, Pocahontas, Little Mermaid (only at CA adventure), Hunchback of Notre Dame, Frozen, Brave, Tangled and Mulan don’t have rides?  Alice has two, Monstro is featured in two. 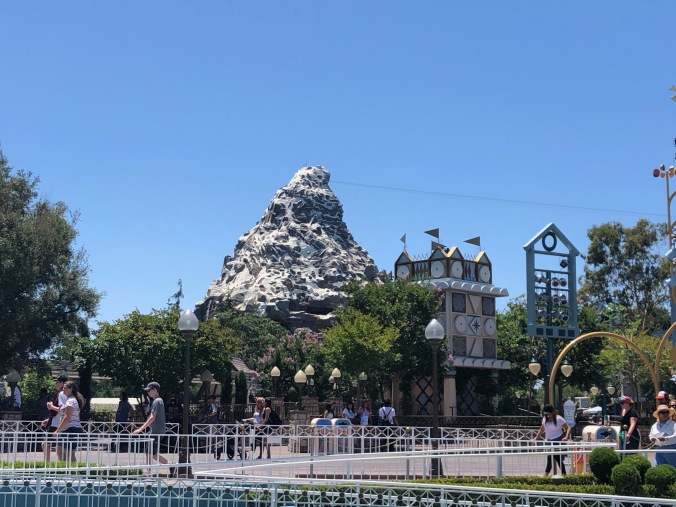 doesn’t look so big as an adult

And yet there’s the Matterhorn Bobsleds that they had not incorporated Frozen into yet.  Marketing department, call me!  My elder nephew single rode the Matterhorn three times, which is the best way to do it, because you can jump the line quickly, while the younger and I floated through Small World.  This is the best ride to do in midday because it is long and air conditioned.  At this point, the sun has been beating on you, and you’re ready for a sing-songy cruise through the world. You’ll be refreshed when you’re done.

Toon Town entrance is located right next to Small World, and for some reason, we waited in line for like 40 minutes for Roger Rabbit’s Cartoon Spin.  It’s always the longest wait, and it’s not that great.  I don’t get it, I swear never again.

The main attractions in this land are Gadget’s Go Coaster and of course, meeting the characters at their houses.  We saw Pluto and Goofy wandering around, and of course, had to visit Mr. M. Mouse to pay our respects for him sharing his home with us. 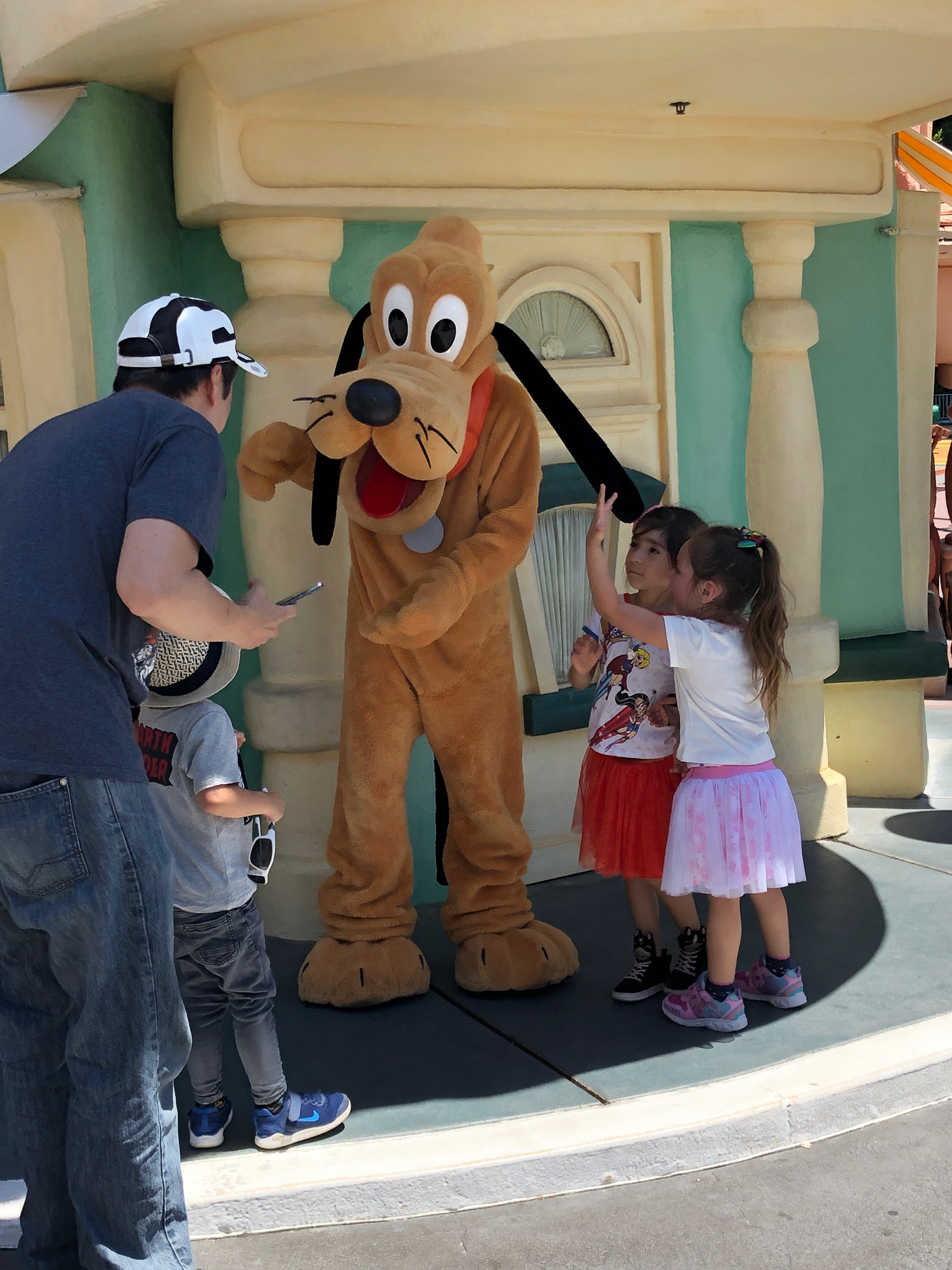 This is another great attraction because it’s very cold and there’s classic Mickey cartoons playing while you wait.  He is very gracious, and the cast members will take pictures for you.  Still the biggest celebrity I’ve met to this date (at multiple homes across different continents).

We stopped at Alien Pizza Planet for a slice as my nephew rode Hyperspace Mountain.  There’s a lot of Star Wars memorabilia in Tomorrowland as well, and it’s a shame the two lands aren’t connected for more continuity.  Next was Buzz Lightyear’s Blasters which is a run interactive game where you shoot at targets with laser guns.  This was one ride that was new to me. 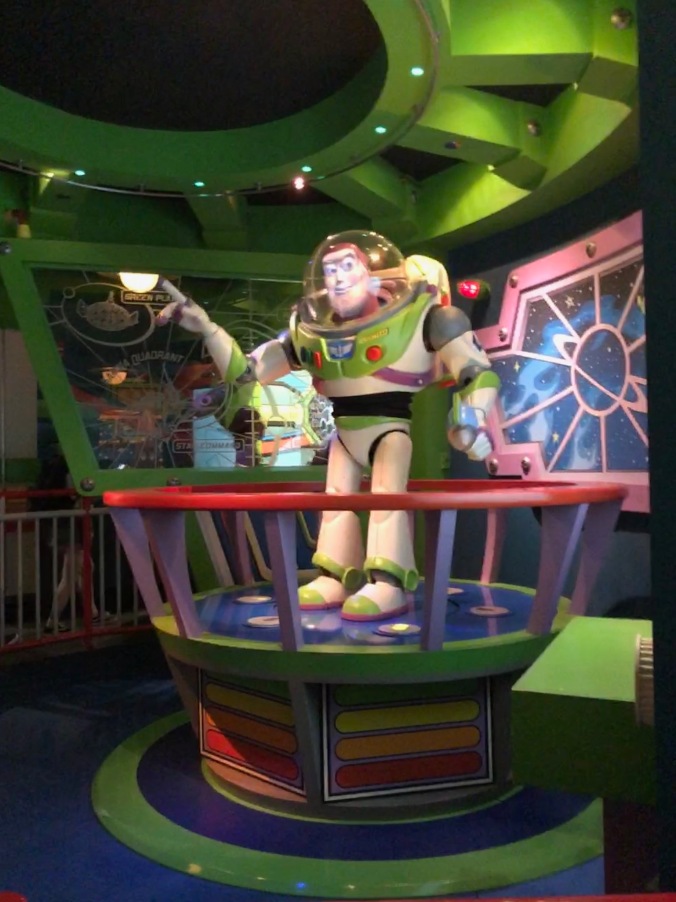 now to infinity and beyond

We then fast passed Star Tours (always fun to hear C3PO freak out), and then hit up Autopia (not as fun when you have been driving for years) before heading for our penultimate stop, the Disneyland railroad.

I always do this at the end because usually I’m dead tired, and it’s nice to kick up your feet and ride around the park.  You also get to learn about the Grand Canyon and dinosaurs, which is not on theme, but okay!

Our train broke down at New Orleans Square, so we walked over to Sleeping Beauty Castle to take some last pictures…because duh, you have to.  Last stop was the Jungle Cruise, where I always appreciate the off-color banter from their cruise guides. 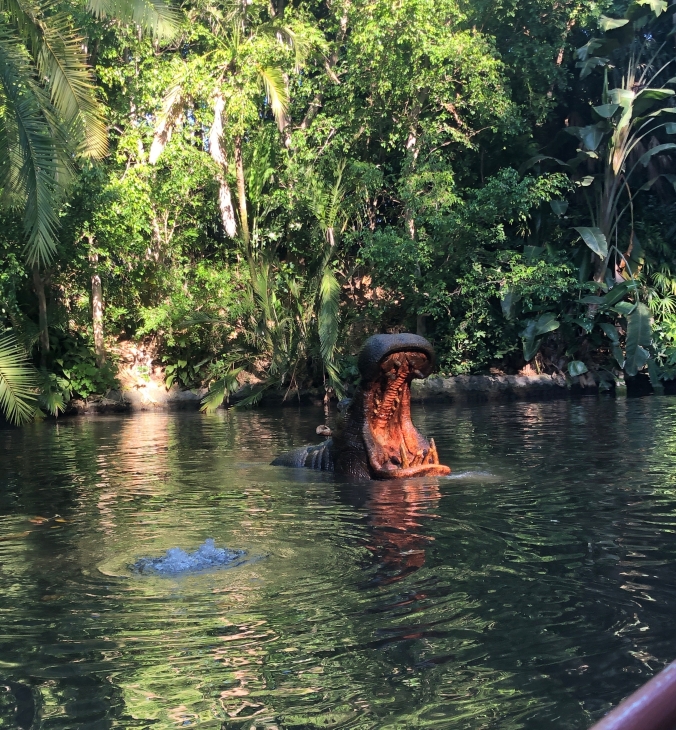 We took a slow stroll on Main Street, U.S.A. to enjoy the Americana and kitsch (did not stop for Mr. Lincoln, sorry) before bidding adieu.  Stopped at the Starbucks at Markethouse to grab my souvenir, the special Disneyland mug, and the Mickey Mouse linzer cookie (a steal for $3!).