So, I’m not Catholic.  Just gettin’ that little factoid out there.  I am, of course, familiar with the religion and of historical and current events, but I am by no means an expert.  I went to Rome without having read up extensively on the topic, purposefully to leave my mind open to the environment.  Despite my lack of knowledge, I have to say that going to the Vatican City was an unforgettable experience.  There is beauty in the concept of a religion, even if its not yours.

just like a dream, you are not what you seem…

A little Madonna to start our trip to the home of Catholicism (although I suppose she is Jewish now, so maybe not the best reference), and the home of the Pontifex himself.  Currently, the leader of the Catholic church is Pope Francis.  Born Jorge Bergoglio, this Buenos Aires native is the first pope to hail from the Southern Hemisphere and is number 266 in all.  He chose his name after St. Francis of Assisi (travelogue forthcoming) because he was concerned with matters of the poor.  Not only is he the head of church, but also leads this independent state.  No separation of church and state here. 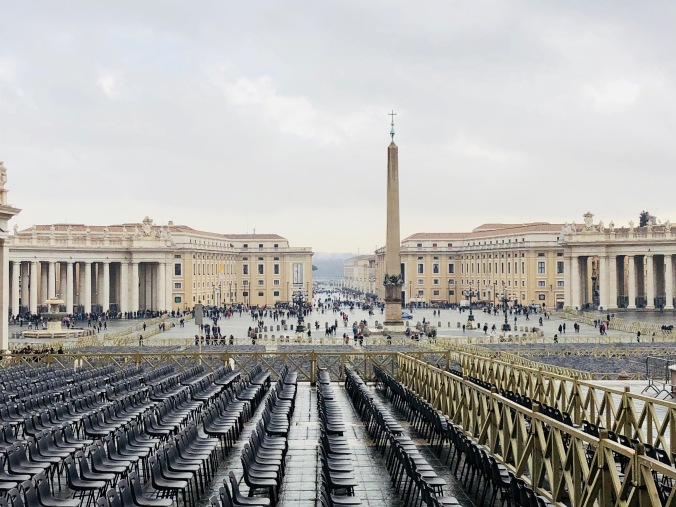 When the Pope is at home, he makes appearances from his balcony on Wednesdays and Sundays to lead mass.  If you’re so inclined, you can watch from the massive St. Peter’s square with the thousands of other pilgrims seeking an audience.

You need to go with a tour or buy your tickets beforehand because taking a chance when you get there is just foolish.  And I assume the Pope suffers no fools.  The lines are long and there are pickpockets (yup even in the holy city) abound, so do yourself a favor and plan ahead!

The first place to start is the Vatican Museum.  Even if you’re not a religion buff, at least you will get a lesson in classics of architecture and fine art.  All the arches and domes, vaulted ceilings, sculpted furnishings and sarcophagi will astound you. This is an incredible collection amassed over centuries: busts, mosaics, tapestries, murals, and my personal favorite, the abundance of frescoes above.

We’ll get to the most famous relief in the world, but literally in each room, there’s adornment and decoration in all corners, covering every inch.  For a religious monument, it is certainly not shy about showing off Roman Catholicism’s abject wealth and power.

literally gold on the ceiling

Some of the highlights were the geographic tapestries of Italy and of course, the Sistine Chapel. 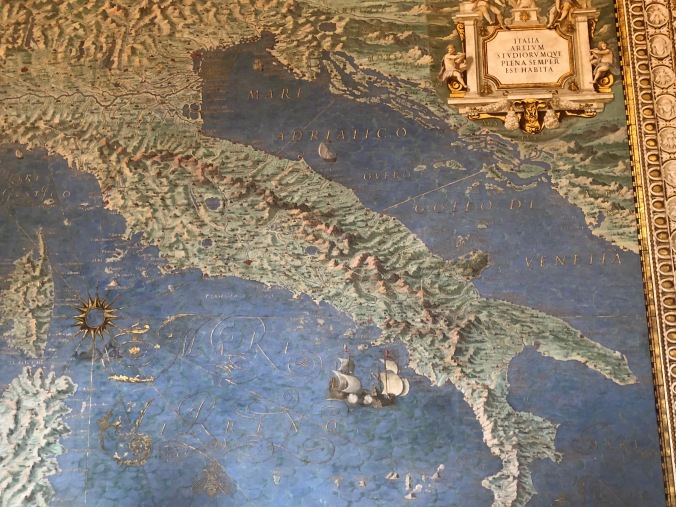 No pictures are allowed, but this is the piece de resistance.  Michelangelo’s great masterpiece, the ceiling, (one of them at least) is lovely, enjoy all of the scenes and cherubs.

copyright: catholic church, vatican, michelangelo, anyone but me 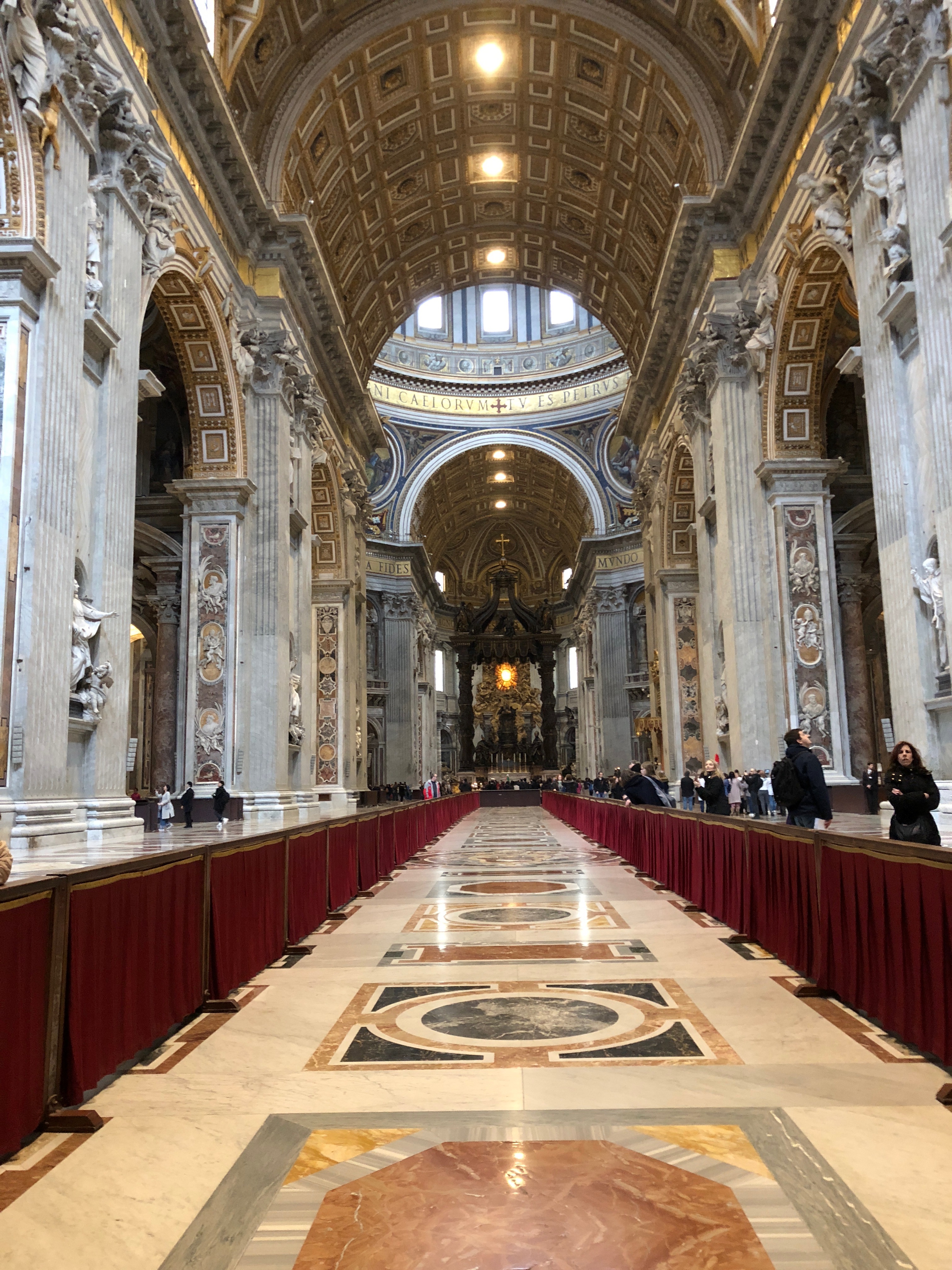 After pondering your existence in comparison to Michelangelo’s, just wait he’s not done yet.  Head next door to St. Peter’s Basilica, one of the most grand religious structures in the world.  St. Peter was said to have been crucified in this area in 64 AD.  Maybe not as ornate at some other basilica’s (St. Francis in St. Louis has my favorite mosaics, St. Mark’s has Venice as a background), but this is the granddaddy of them all.  The original Michelangelo masterpiece Pieta is here (yes, him again), as are the corpses of many former popes.

Pieta depicts the body of Christ lain over his mother’s lap after the Crucifixion, and is the classic representation of Renaissance beauty.  Perhaps one of his most well known works, it is the only sculpture signed by Michelangelo himself.  If you haven’t gathered by now, Michelangelo was the truest Renaissance man: painter, sculptor, architect, lover of pizza…wait, that’s the ninja turtle.  Turtle power.

Honestly though, I mean he and Leonardo da Vinci were neck and neck in that race, and arguably Michelangelo’s art, at least in the sense of consistency and sheer volume, was better.  In terms of turtles, Michelangelo used nunchucks while Leonardo had katanas, so maybe Michelangelo again?  Obvious Raphael was the best turtle but that’s another argument for another time. 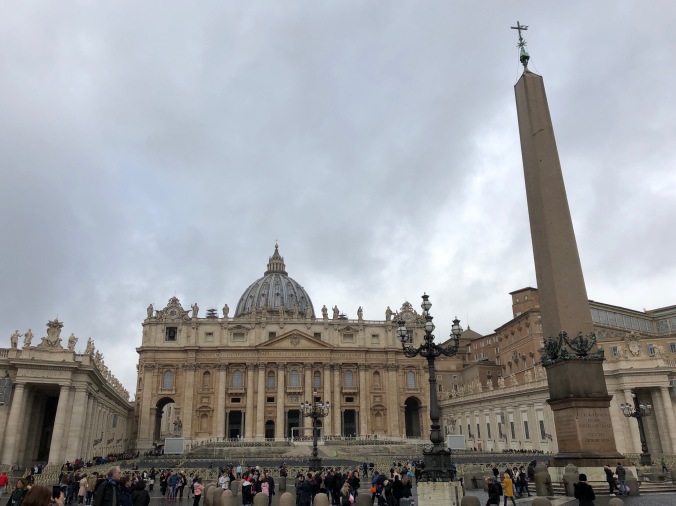 Vatican City is its own independent state (smallest in the world), and you can easily cover the whole area in a morning.  And that’s it, you’ve covered the whole country! Well, actually, there’s also a small post office with its own stamps.  It’s a real secular souvenir, and thusly, stamps are very popular for this reason.  Otherwise, get your rosaries and Pope-adorned objects in the official Vatican City gift shops.  The gift shops and tickets to the museums are the main economy of the country, but I’m guessing the fact that there are 1 billion plus Catholics in the world helps keep this small country going.