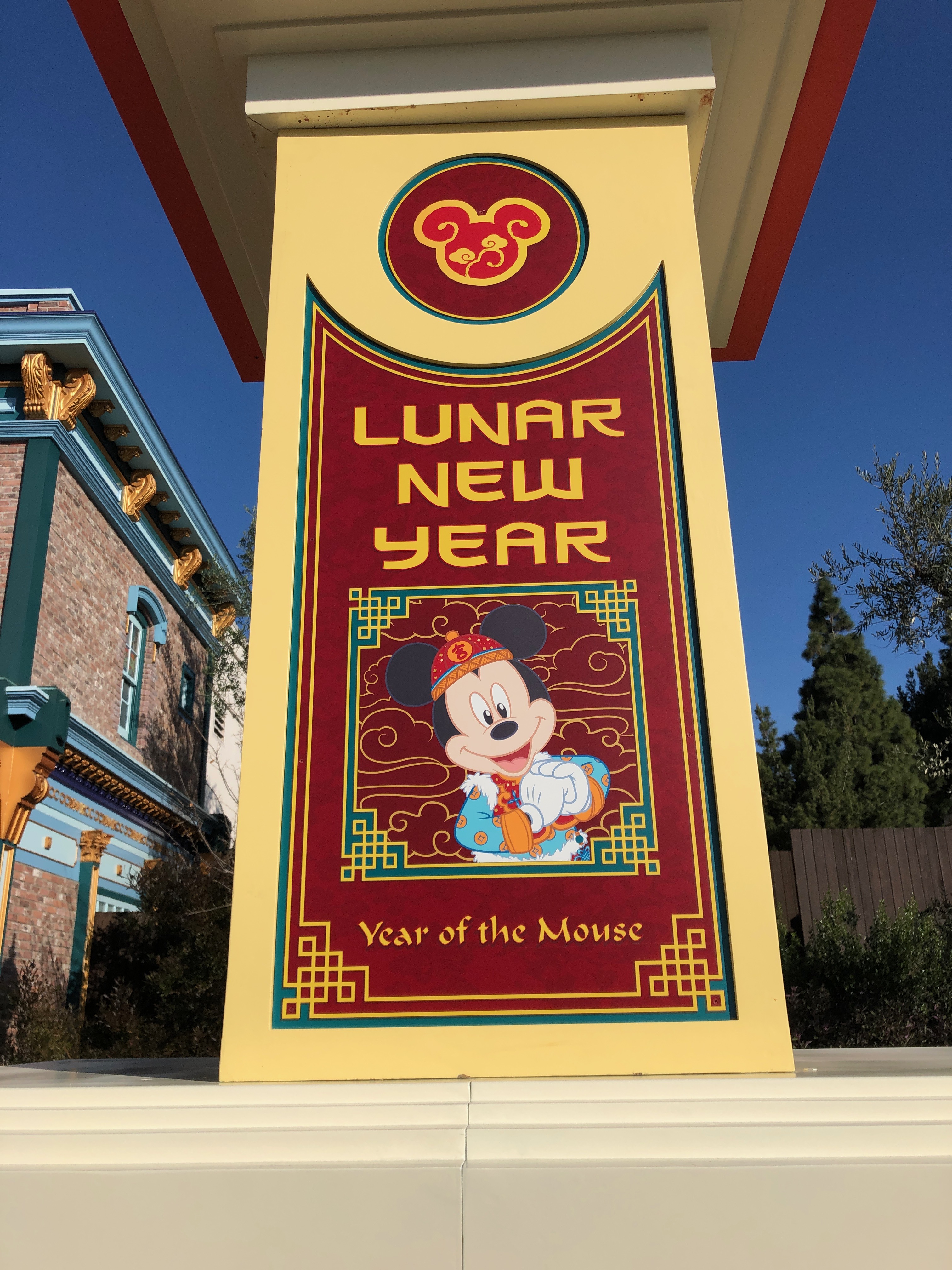 The Lunar New Year celebration is based on the celestial calendar that is used by several Asian nations (namely China, Vietnam, Korea).  Each cycle of roughly 12 months is represented by one of 12 animals in the zodiac: rat, ox/water buffalo, tiger, rabbit (or cat in Vietnam), dragon, snake, horse, goat, monkey, rooster, dog, and pig.

This year is my year, the year of the rat.  I share this distinction with noted creator William Shakespeare and fearless leader George Washington, you may have heard of them.   Folklore tales abound, but there’s thought that the rat was the first to show up to a council of animals that was called forth by the Jade Emperor (after sabotaging the cat and the ox, those cunning little rats), or that the rat won a competition set forth by this leader (also by screwing over the cat by not informing it of the time of the competition).  Whatever the case, the rat is the first animal of the zodiac and is thought to be very clever and observant (and clearly you should watch your back around them).

If you haven’t already bought your ticket to head to Asia for this celebration, which falls on January 25, this year, then you’re probably a little late.  So how better than to celebrate it stateside by going to Disneyland?  One of the most notable festivals dedicated to this holiday happens to be at the Disney Parks.

It’s a big party this year as Disney has taken the liberty to denote this the year of the mouse (that Mickey loves to appropriate things to his benefit, doesn’t he? But, also see the Mickey x Gucci collab because it’s fire).  They did a great job though, as the California Adventure park in Anaheim and the Epcot China Pavilion at Disney World have a ton of pageantry and specialty merch all set up to welcome the new year.

It seems like I’m reneging on my position as not as huge Disney person, as I have been to the park several times in the past year already.  It’s just so close to my house and everyone tends to want to visit the house of Mouse.  I have not been to California Adventure park in YEARS.  Like, probably not since it opened, so this was a totally different experience.  It’s a weird concept, a theme park based on CA, in CA, but it’s got its own charm and fans, I guess.  My BFF’s kids LOVE this park because of all the Marvel stuff. 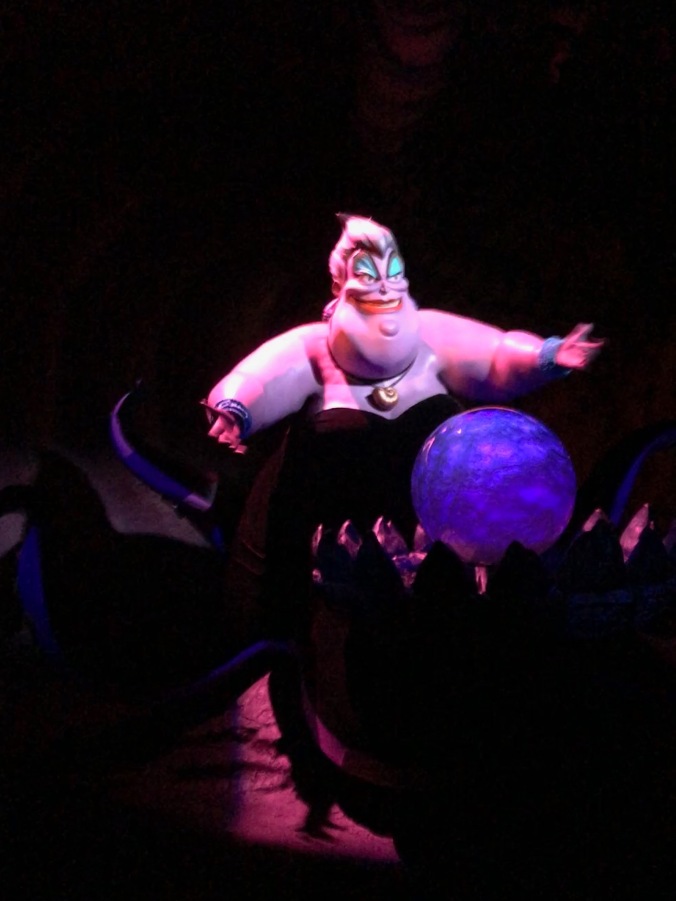 First of all, they have a Little Mermaid ride, which has been lacking for years.  You ride on a clamshell (only vehicle you could have IMO) on an underwater adventure.  I’m not going to lie, I rode this several times.  My all time favorite Disney classic, ignore the themes of selling your soul and changing yourself for a man, so on so forth.   It’s the bomb.  All the songs are bangers.  This ride is located across from Paradise Gardens Park. 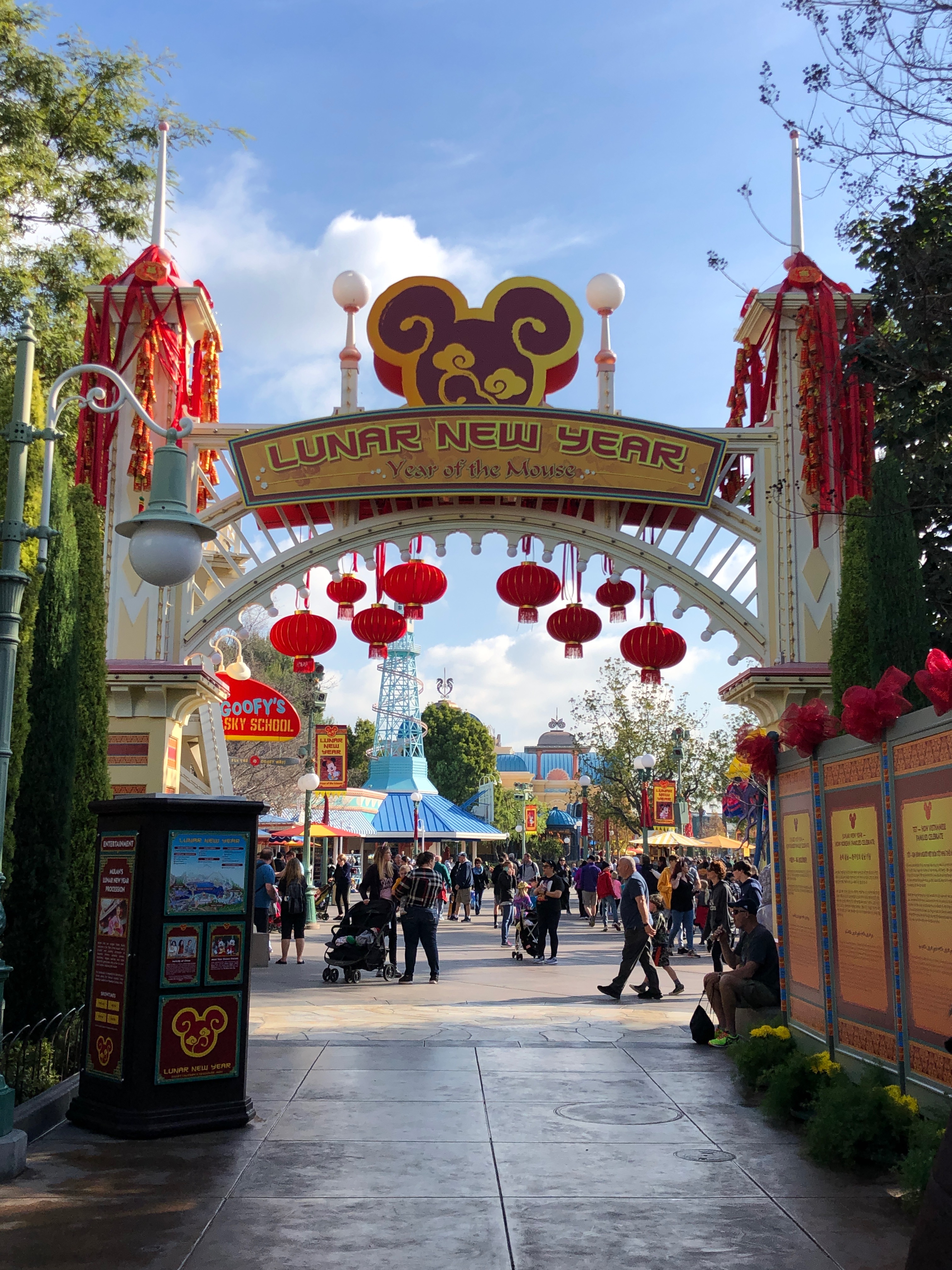 This is where you stake out your prime spot for Mulan’s Lunar New Year Procession. 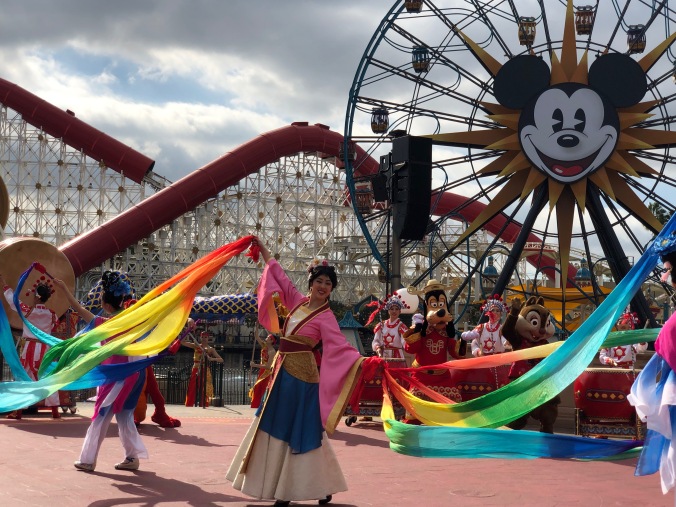 She dances with beloved Mushu and of course, Mickey and Minnie in their asian finery. There are four shows for the procession daily, which showcase colorful Chinese dancing and music, and also the nightly World of Color spectacle is also Mulan influenced for this limited time festival (January 17 – February 9). 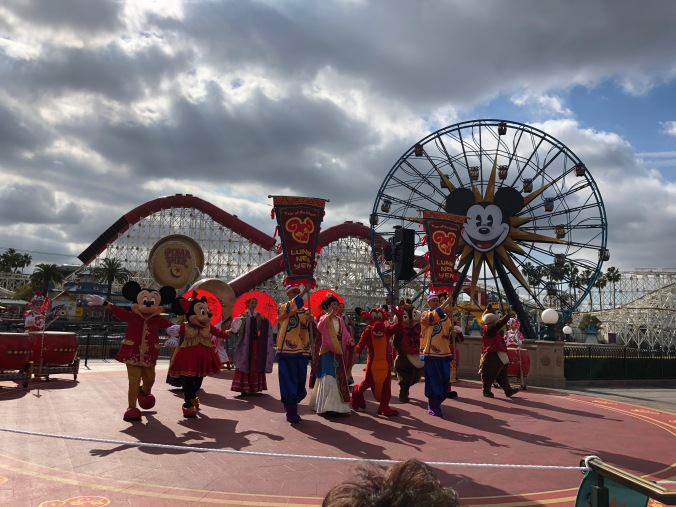 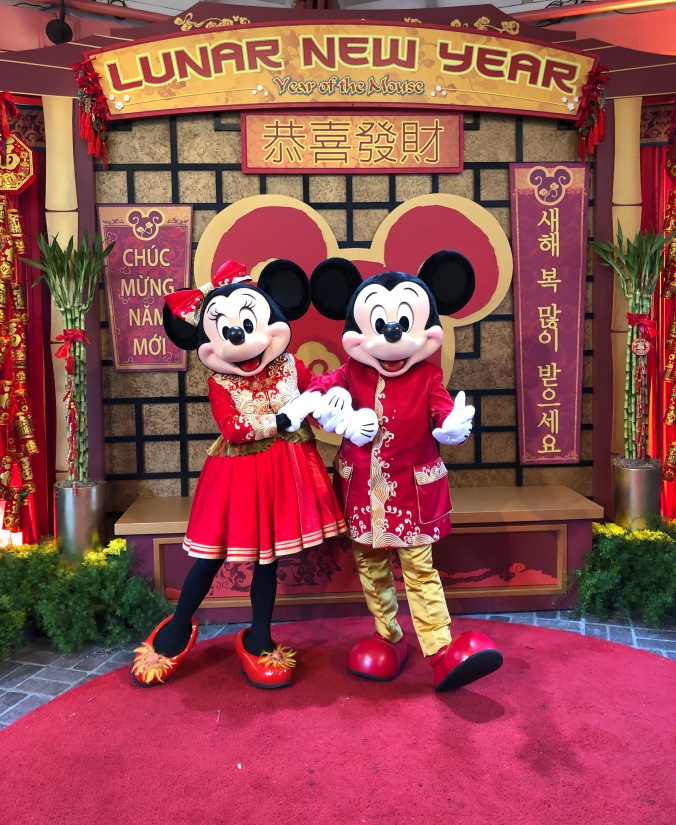 could these two be any cuter?

However, the main event may be the Asian delicacies offered during this special event.  The way to go is by Sip & Savor pass, $42 to sample 6 items at the different restaurants and food carts around the park (alcohol not included). 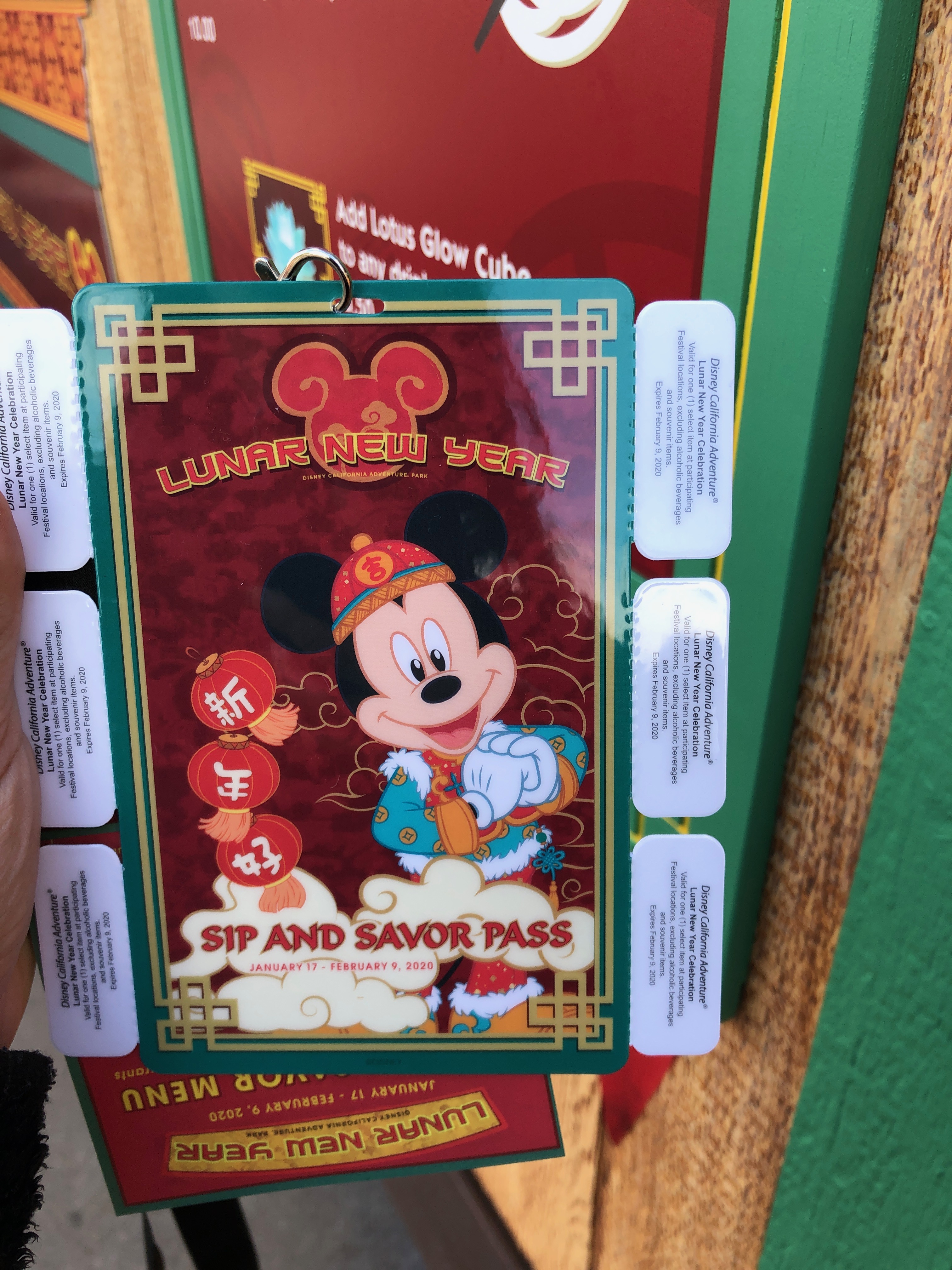 Not gonna lie, love the inclusivity as they have Korean and Vietnamese offerings in addition to Chinese fare. 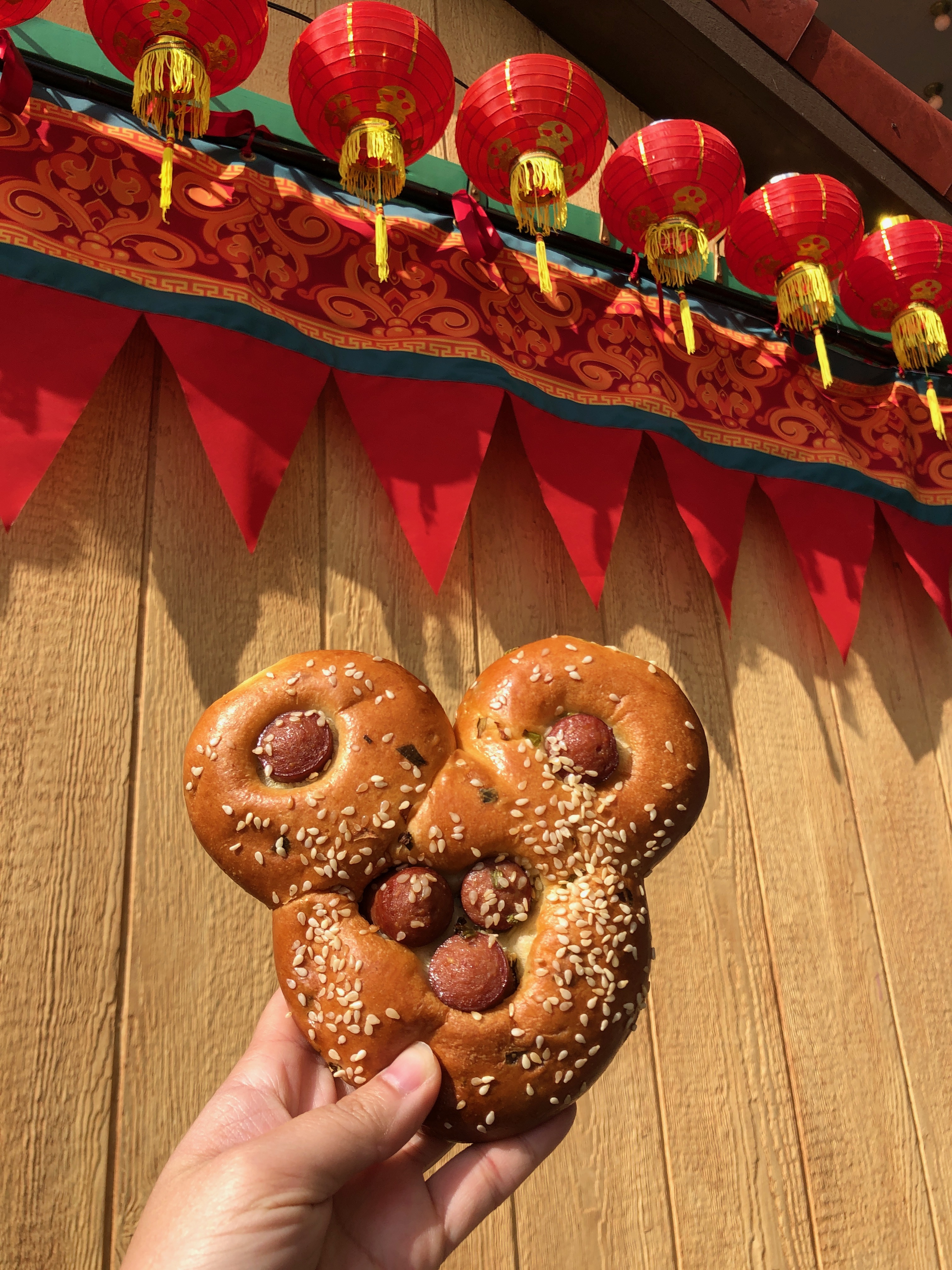 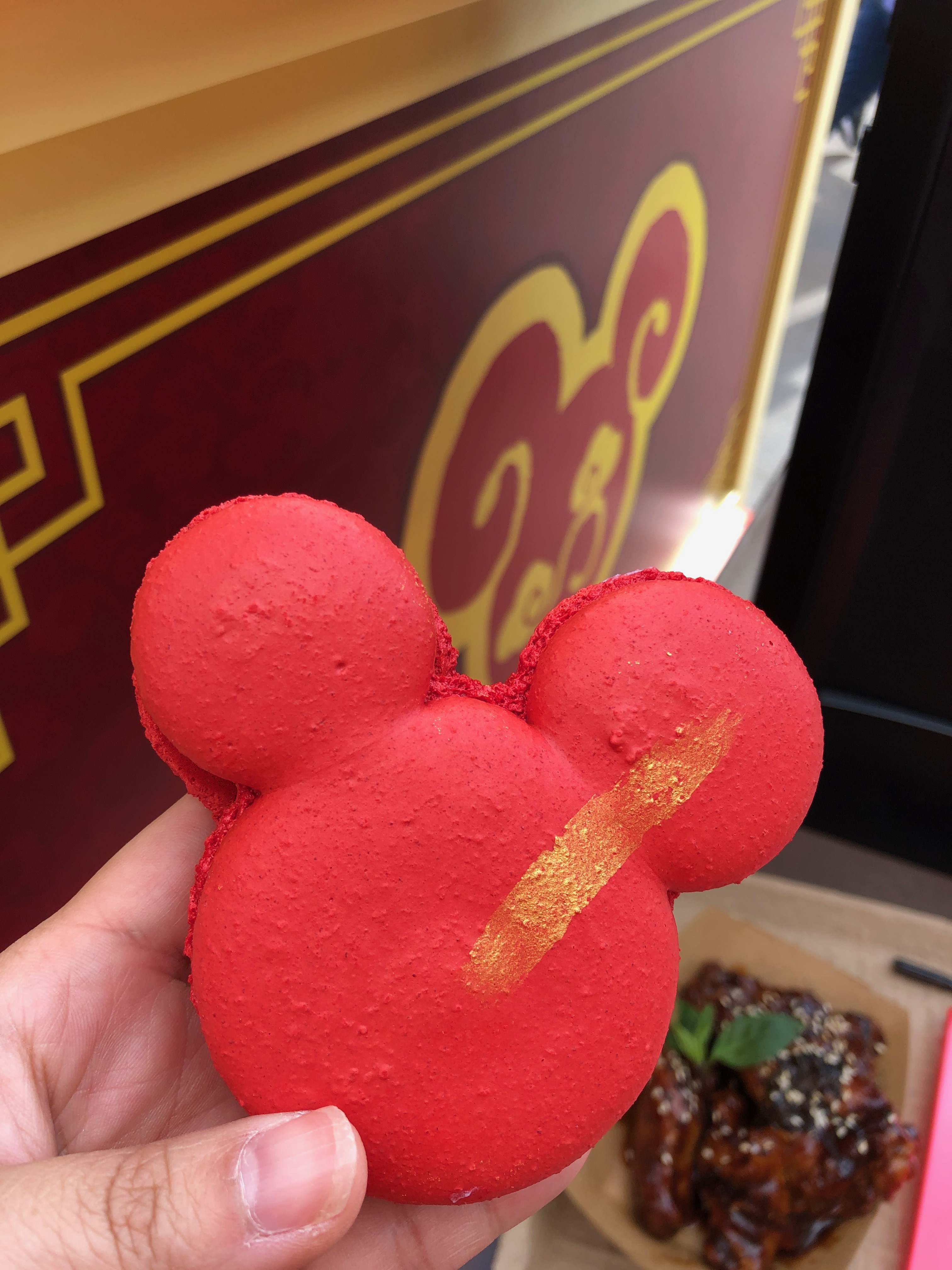 And I was so tempted to get the whole grilled tilapia with rice, which is the most asian thing you could ever eat anywhere, much less at Disneyland. 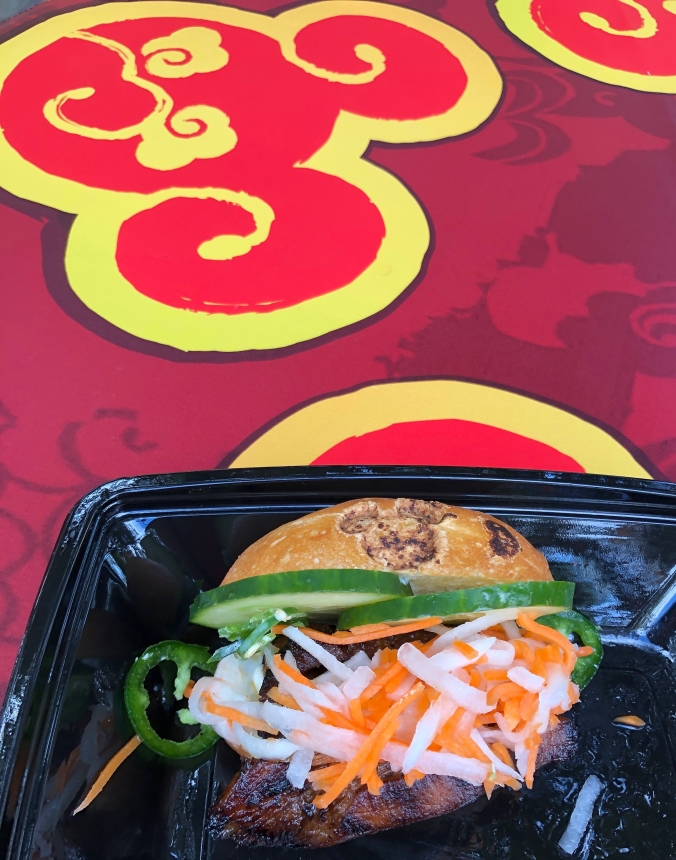 the jalapenos are chef’s kiss* 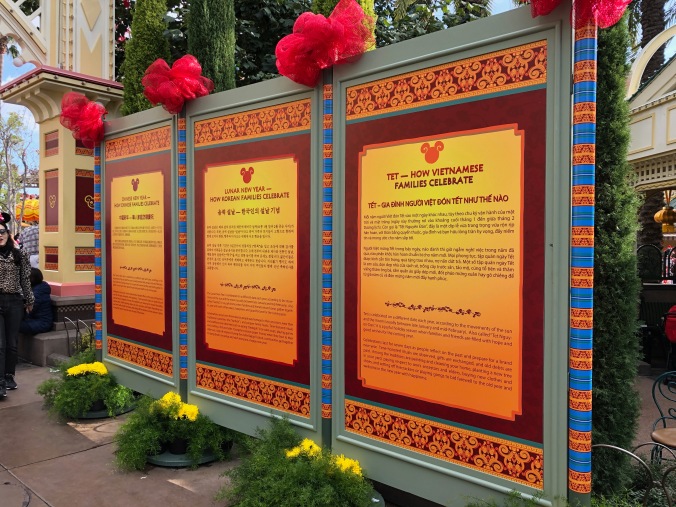 They also have crafts like calligraphy, coloring a fan (a little stereotypic, but I’ll allow it because I got a free fan), Asian musical troupes and lion dances, so everyone can revel in the dawn of the New Year. 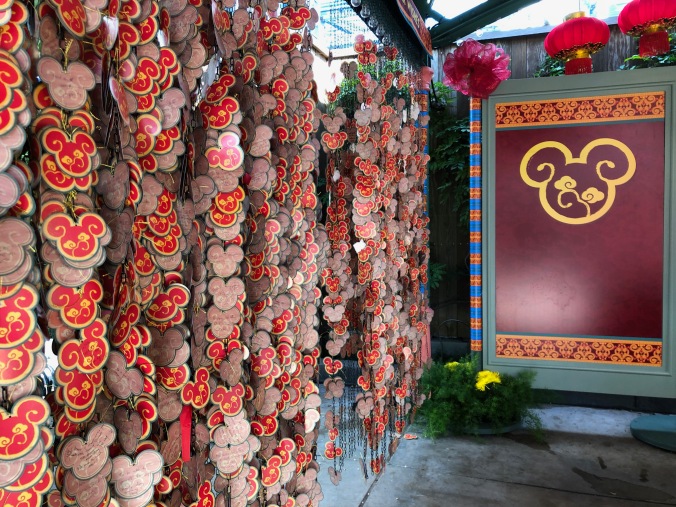 wish me love a wishing well, kiss and tell

After enjoying all the sights and delights of the holiday, you have to enjoy the rides. 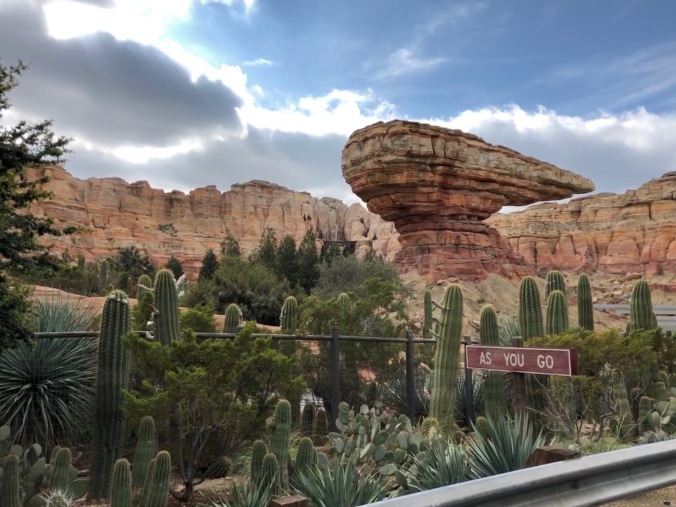 i dare you to not hear rascal flatts right now

I love the Incredicoaster (although my body does not) as well as the Cars Land attractions (Radiator Springs Roadsters, Luigi’s Rollickin’ Roadsters, Mater’s Junkyard Jamboree — say those three times fast).  Actually the midway at Pixar Pier is very old timey boardwalky, although paying more to play games is a bit beyond my cheap butt’s budget. 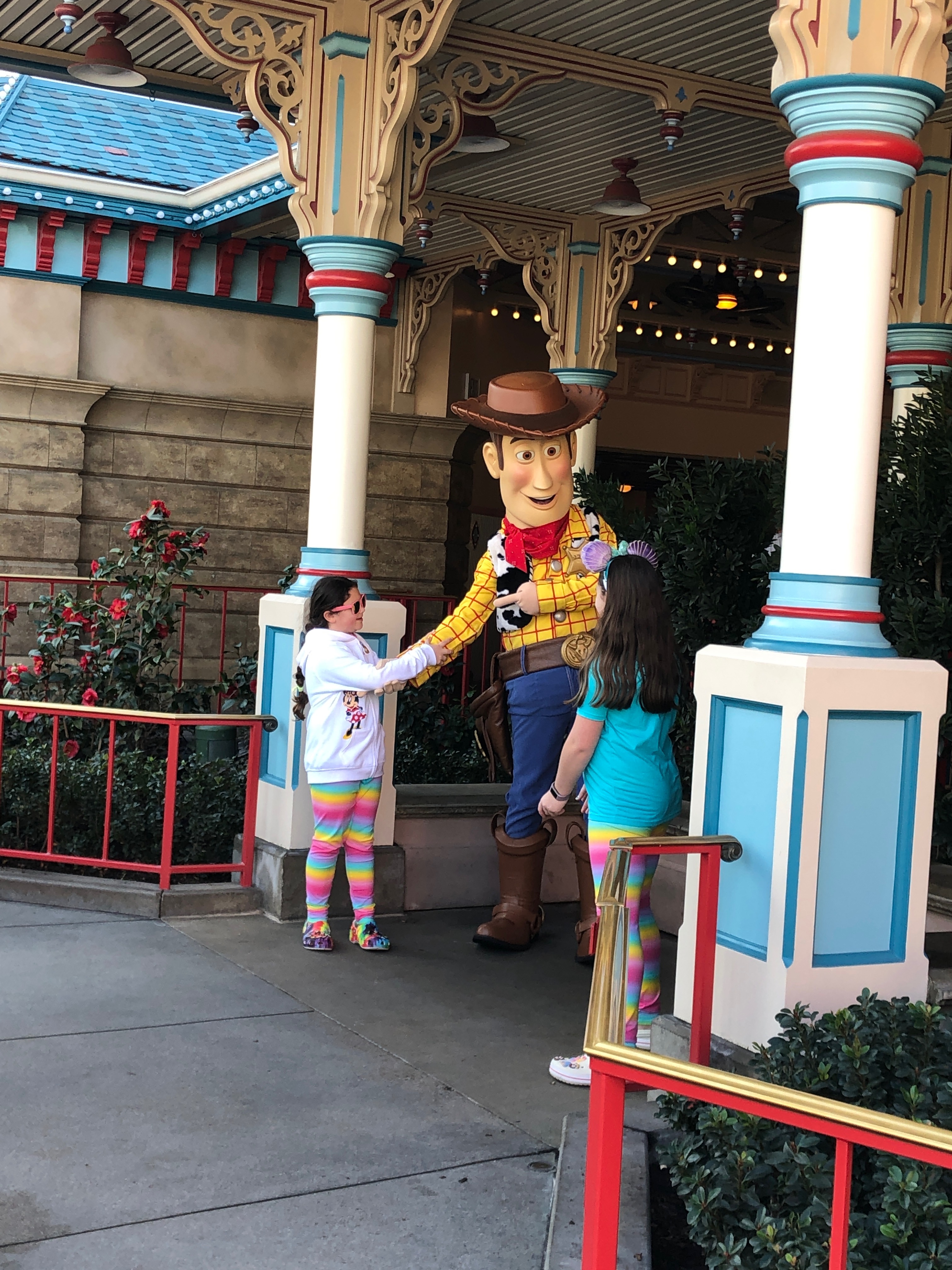 The Toy Story Midway Mania is the line I spent the most time in, and it was fun, but I hate lines (which is why I don’t go to the parks that often).  The Soarin’ ride is probably my favorite because it is like a virtual flight over some of the world’s great sights: the Eiffel Tower, Pyramids of Egypt, polar bears in Greenland, the Taj Mahal, love the aromatic feature of the ride too, it’s literally a trip. 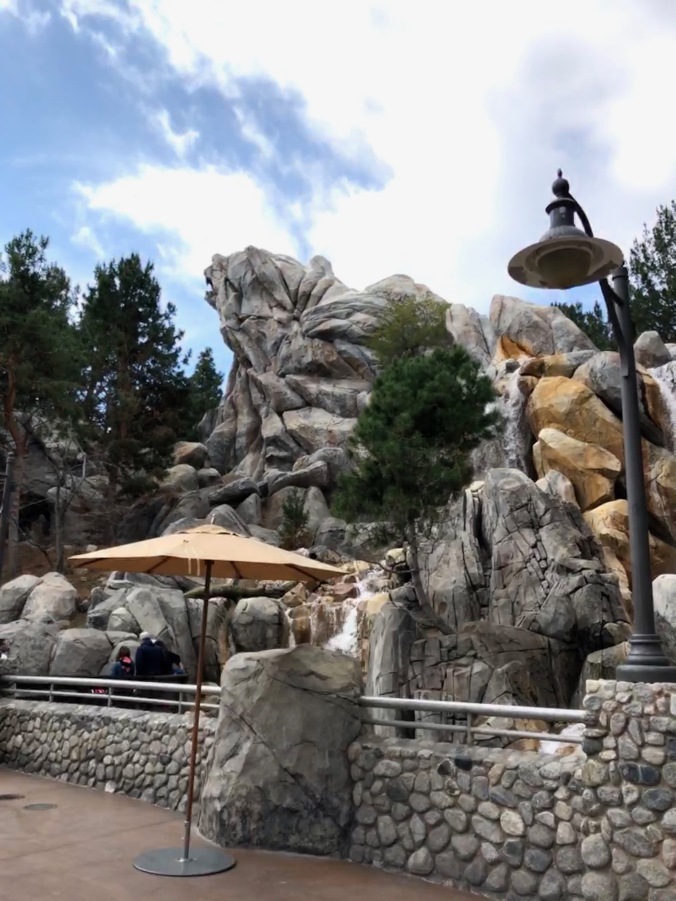 Grizzly Bear Run is actually very fun, but can be a little damp (it is currently closed for renovations which is a bummer).  I refuse to do the Guardians ride because I do not do big drops, but the whole Marvel area/Hollywood studio backlot is rife with characters milling about. 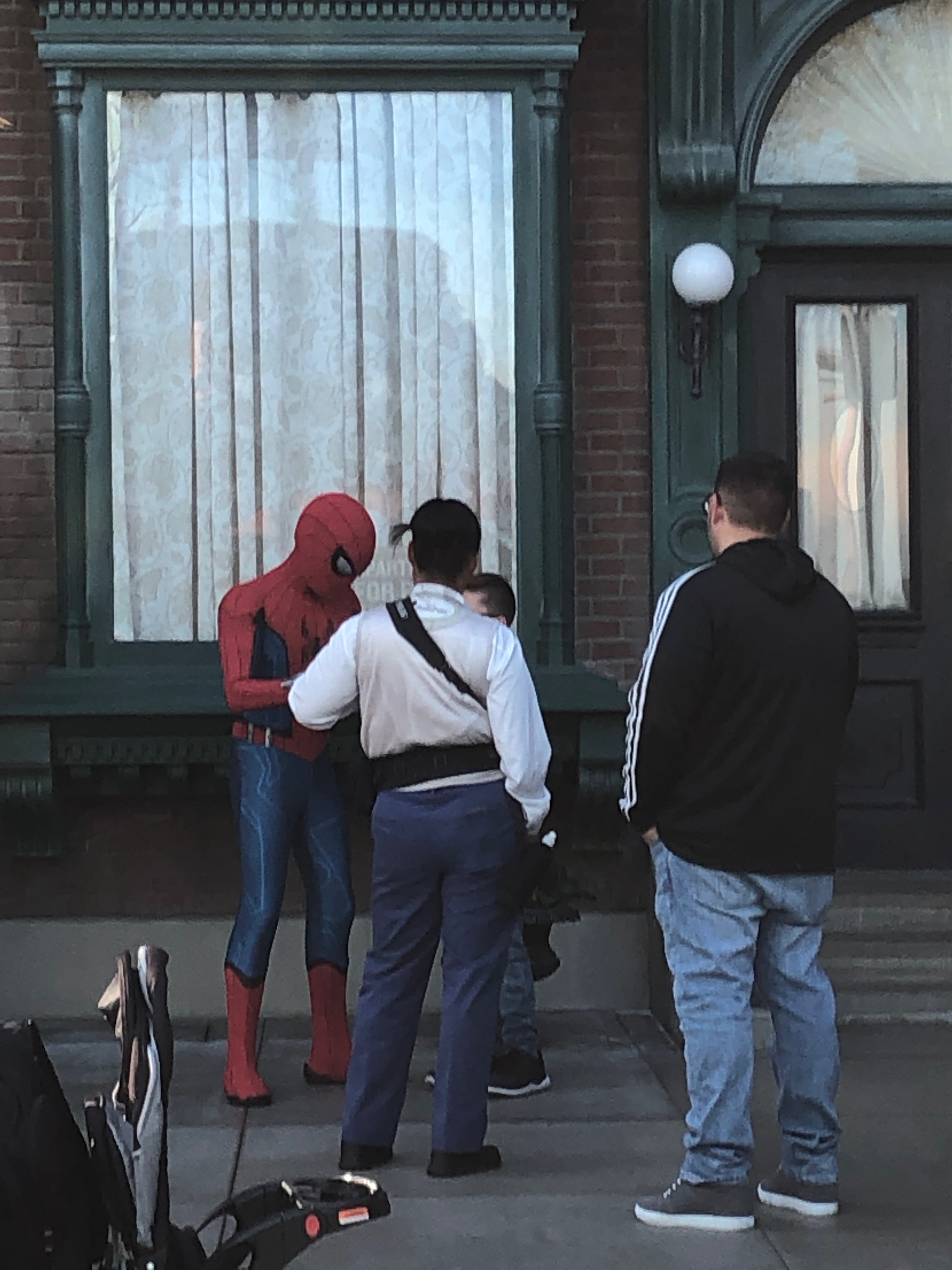 Before you leave, you have to grab some merch because it’s anti-consumerism if you don’t.  I am obsessed with Chip ‘n’ Dale (Rescue Rangers, obvs can’t wait for the Akiva Schafer movie to come out), always have been since I was a kid, so I had to get a teacup that I will probably never use. 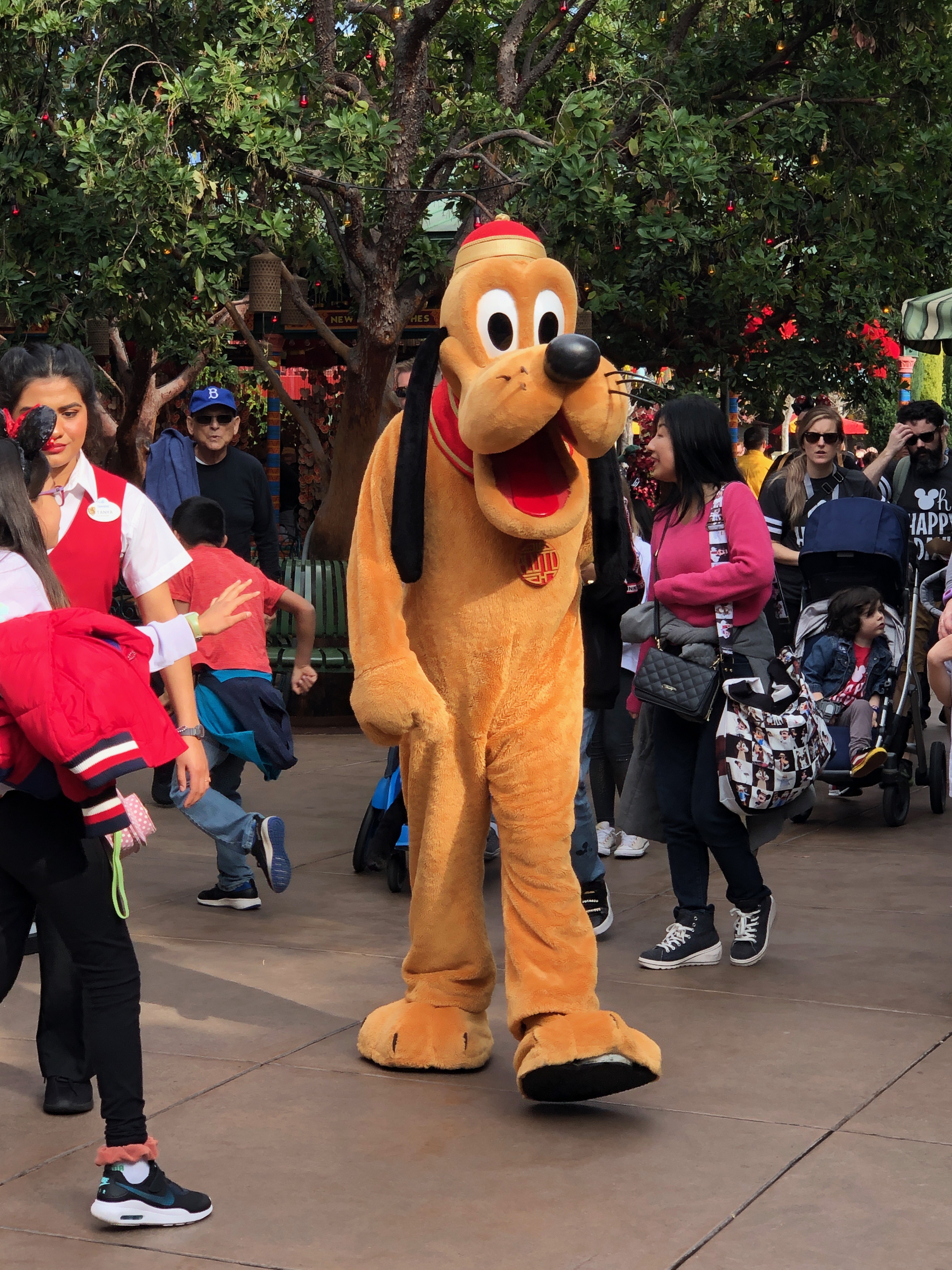 I love these kind of special events because it exposes other cultures to those who may not have never known about it otherwise, and if a visitor is a little curious about customs from another countries, then that’s a win.  Good fortunes in the New Year, y’all.