I had every intention of writing a new blog post on Sunday to post today.  That did not happen as I spent the day devastated over the news of Kobe Bryant’s tragic death.   Kobe was one of my childhood idols, as a kid who grew up in Southern California, he was everything.  The greatest Laker to have ever played.  An icon who was more magic than Magic even.  Kobe Shaq early 2000s was the most dominating Little Big duo of all time, and I’ve had many great memories watching those games and championships.

We broke down all the games, bought the jerseys, reveled in the parades.  I always imagined Kobe as an elder NBA statesman, ushering in young talent of the league, he had seemed untouchable and invincible.  And the unexpectedness is maybe what hurts most, because he had so much ahead of him.  His daughter and the other victims as well.  It’s senseless, it’s so sad and it hurts.  RIP Kobe.

Based on Kobe’s philosophy, the Mamba Mentality, he would’ve probably said well, life goes on, let’s get to the next stage.  And that stage happens this weekend in Miami at Super Bowl LIV.  And perhaps that’s what we should do, LIV it up because tomorrow is certainly not guaranteed for any of us.

The best place in Miami is Calle Ocho. I love culture and you have to appreciate what Cuban culture is to Miami. The benchmark of this area they call Little Havana celebrates all things Cubano, from cigar factories to bachata and domino park. 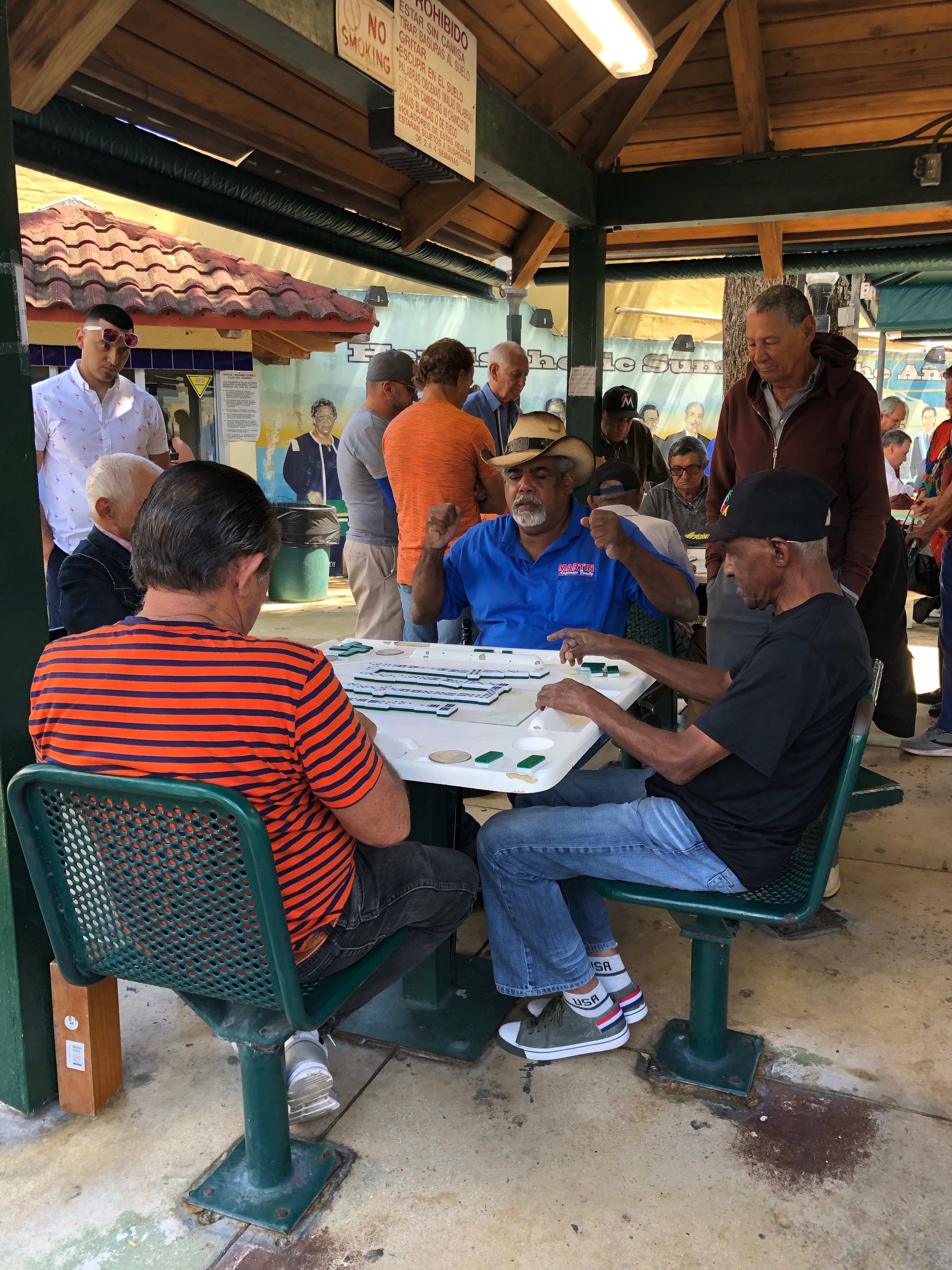 Starting at the visitor’s center, you’ll start see a bunch of cocks. That’s right, the rooster is a symbol of new beginnings and is ubiquitous (ok, there’s like four of them) on this street. They are as vibrant as the people they represent. Good for the ‘gram.

they come to snuff the rooster

If you can’t make it to Cuba, head to one of the cigar factories like El Titan del Bronze, where you can watch them roll cigars and maybe they’ll even let you into their humidor.

As a physician, I can’t endorse smoking any form of tobacco, but tabac smells pretty good. You know what else smells good? Cuban sandwiches from the famous Versailles Café. Grab one and top it off with a café con leche to fuel your sightseeing. 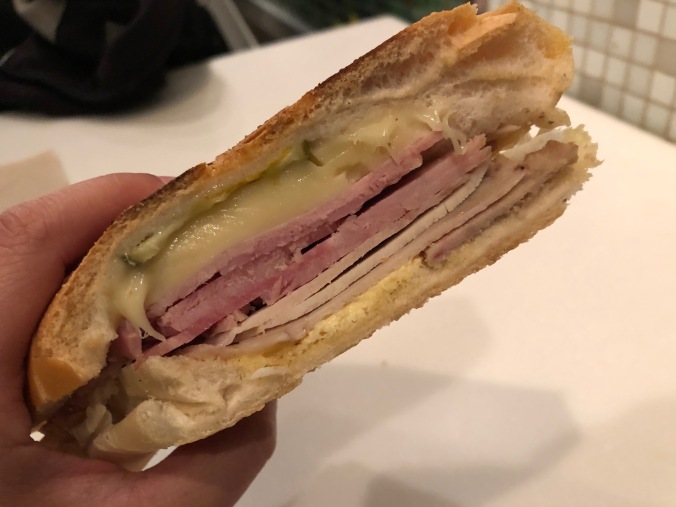 Before you leave, you’ve got to visit Azucar, the famous Cuban heladeria for their famous flavor, Abuelita (Grandma!?!), which is cookies and guava syrup swirled ice cream. If that description doesn’t tempt you, nothing I say will likely change your mind.

I like to stay on South Beach when I’m down there because even though I don’t get all clubby, I like to be near the action and the beach. Yeah, you have to take the causeway to South Beach and even though I was just laying over for a cruise, I still wanted to be in Miami Beach proper. The Riviere hotel was a very quaint, recently remodeled property on Collins and 14th, right in the middle of the action which was great. What wasn’t so great was that it was spring break, so a lot of the street was blocked off making it slightly difficult to maneuver. This hotel is one of the few that provides continental breakfast, (unfathomably had a ton of YooHoo), so very popular with Europeans and families. 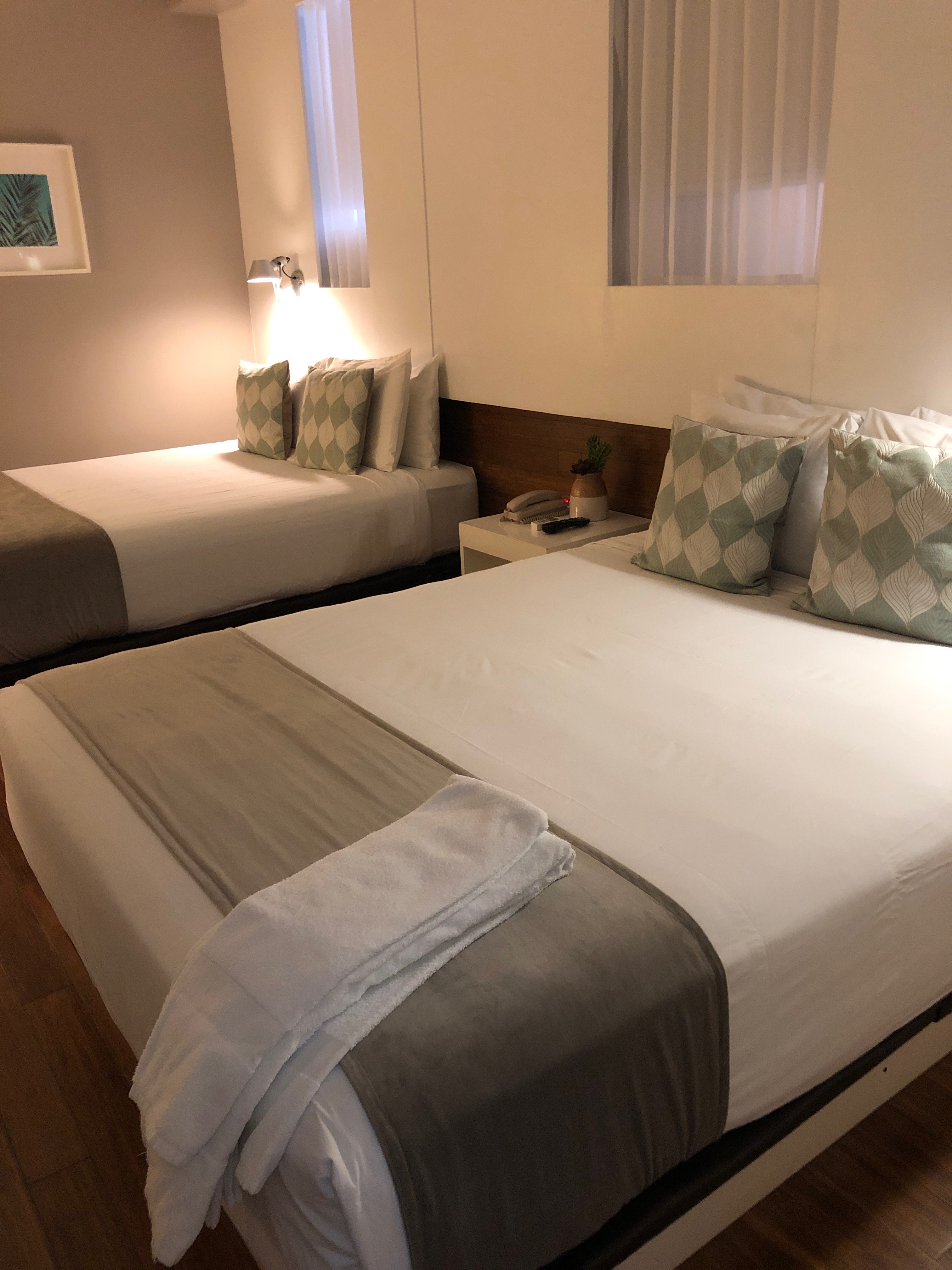 The weather is so temperate this time of year (that’s why there’s so many snowbirds in FL) that it’s the perfect environment to walk around and carouse at all hours of the night. There are a lot of kids hooting and hollering about on the main drags of Ocean, Collins and Washington. There’s also every type of luxury vehicle you can imagine cruising up and down the streets. That’s the Miami life LMFAO sang (?) about, I guess.

Espanola Way is a very cute pedestrian street lined with restaurants and cafes that gives this area a distinctive European vibe. There’s also Happy Place Donuts, the artisan donut shop that makes galaxy donuts. This area is a fine place to grab something to eat, but for the main even of people watching, head to Ocean Drive. Vibrant at all times of the day, it especially comes alive at night. 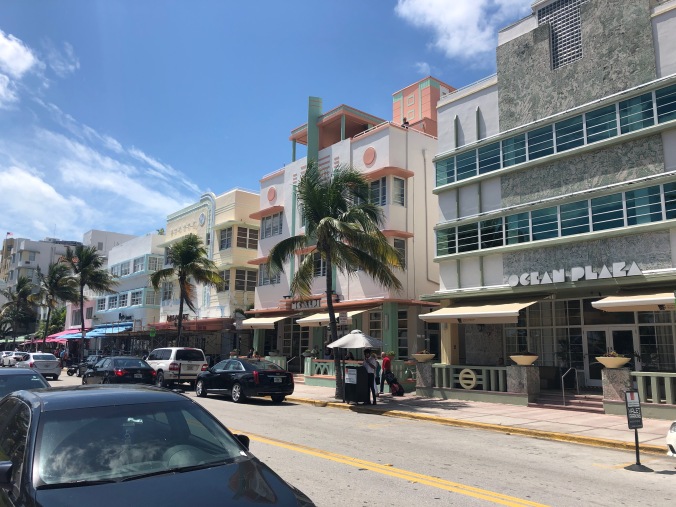 Starting at 15th and walking south, you’ll see the pastel dream that is South Beach hotels. The Betsy has a plantation, colonial vibe, and as you walk towards the Ocean Plaza, Mc Alpin, Crescent and Penguin hotels, you’ll start to see the distinctive art deco architecture for which this street is so famous.

For context, Art Deco is my favorite style.   My favorite building in the world is the Chrysler Building in New York, so Miami Beach is a wonderland of architecture! Art Deco is modern with clean lines and edges, sometimes a little bit exotic in borrowing from Eastern influences by using materials like jade and ivory. The symmetry is the best, very simple and clean, borrowing from cubism principals. I adore it. 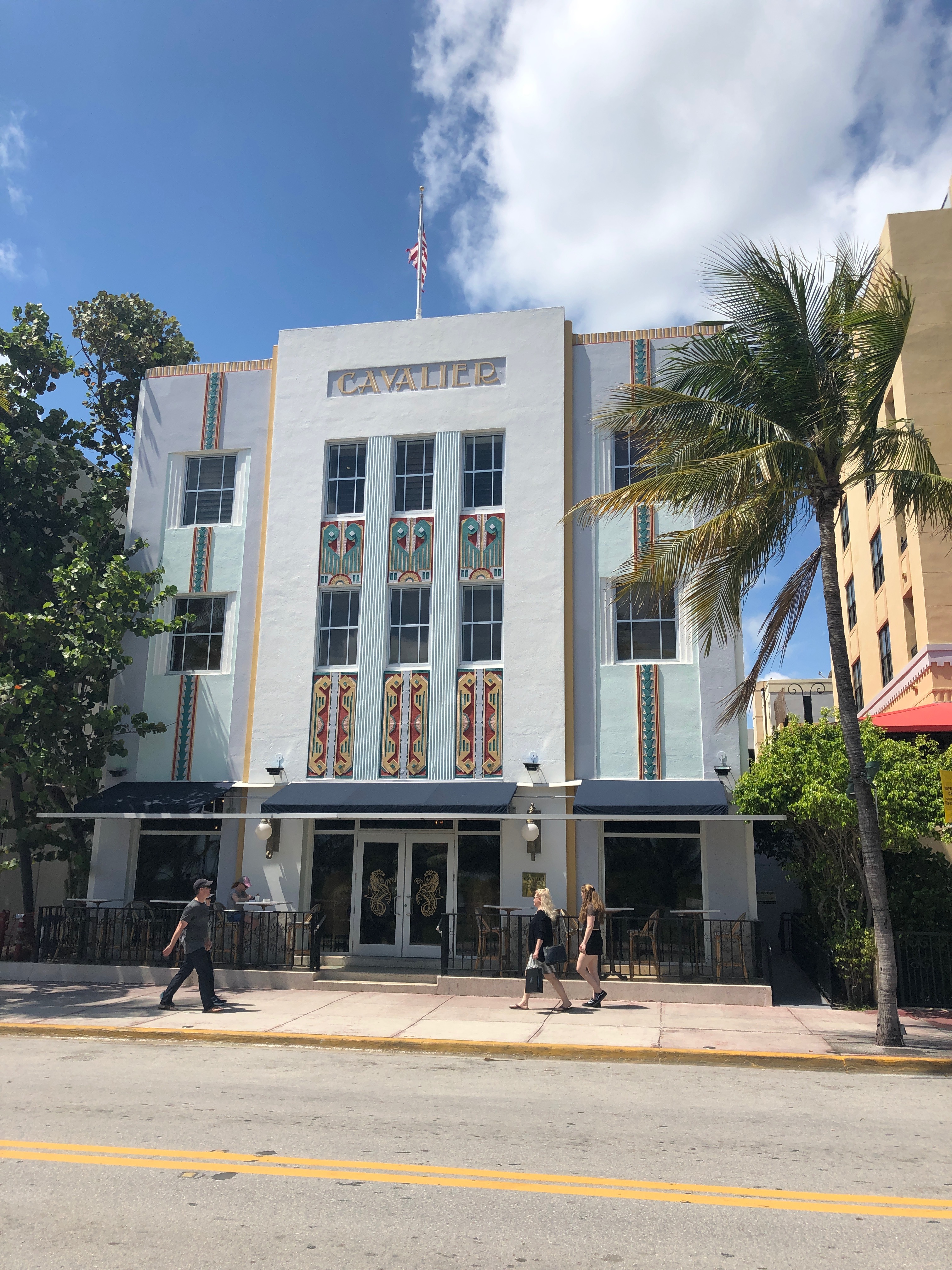 The strip of Ocean around 12th to 14th is my favorite. I love the bold, bright intricate design details of the Cavalier’s façade; the Cardozo’s red marble accenting (which somehow seems refined and restrained), the crisp architectural moldings and ornamentation of the Carlyle and the sunny yellow hue of the Leslie that provides a pop to this stretch.

Just a few yards away is the famous Mediterranean-revival style Versace mansion, where Gianni Versace was gunned down by serial killer Andrew Cunanan in 1997. He was walking home from the News Café a few blocks down, as per his routine, when he was brutally murdered. I cannot believe the steal Versace got this waterfront property for, $3 million in the early 90s. It sold for $41.5 million a few years ago and is now an event space and restaurant. I’m sure its history played into the price, but seriously it is prime real estate. 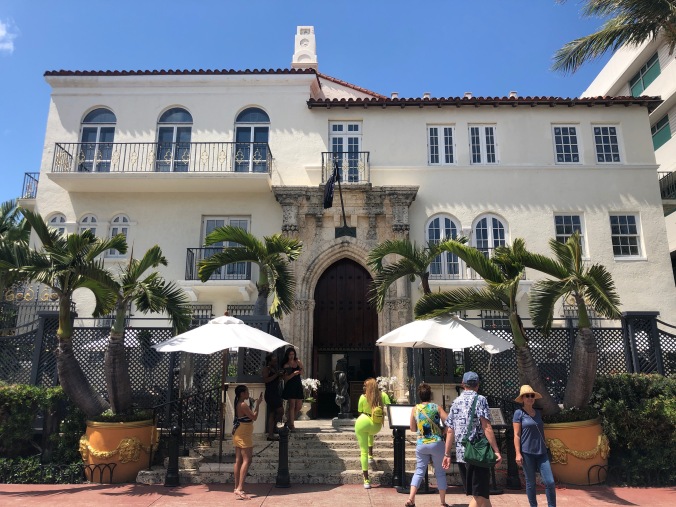 This area is so special in terms of its style, there’s even an art deco museum. Across the way is the famous outdoor drinking and nightlife spot, the Clevelander. An outdoor ice bar is where you can truly life your best Miami life.

Towards the end of the main drag is the world famous Mango’s. No trip to South Beach is complete without seeing the dancers gyrating about at Mango’s. The food is just fair, let’s be honest, are you really going there for the food? 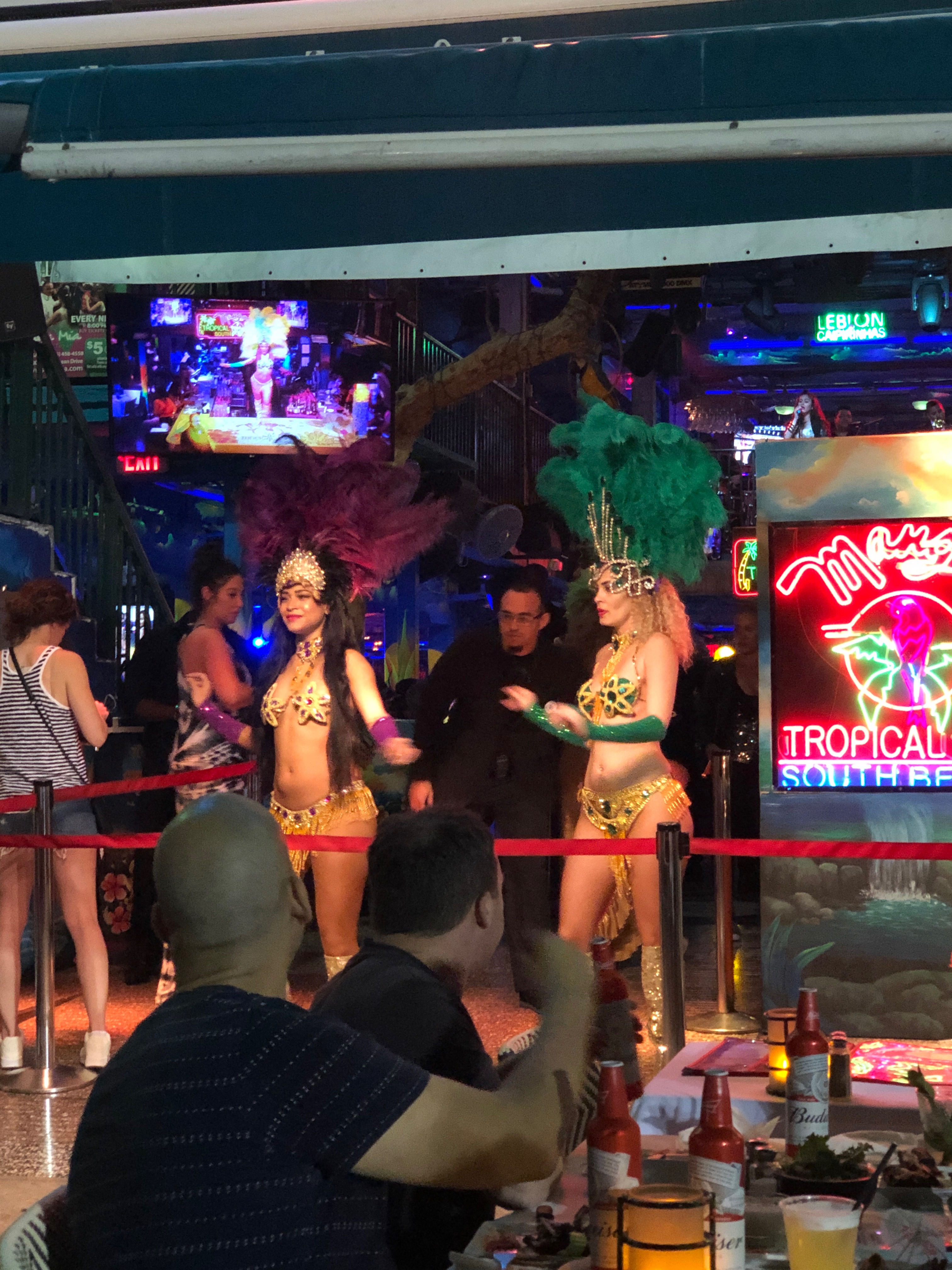 Food wise, Miami Beach is a little hit or miss. Obviously the prices are going to be exorbitant, and the variety isn’t the best. I didn’t eat there this time, but Joe’s Stone Crab is ALWAYS a classic. As a key lime pie connoisseur (most favorite dessert ever), I can say I approve wholeheartedly.

I actually was jonesing for Thai food, and luckily there is Thai House on Washington right across the street from City Hall.  This place doesn’t have to be that good because of its location, but it is!  The pad see ew was phenomenal.

You’ll need those carbs for partying all night long.  Just watch yourself though, the po po are out in force and they are all over SoBe.  Otherwise, bounce in the club where the heat is on, all night on the beach ’til the break of dawn, going to Miami, Bienvenido a Miami.

Stay safe out there, and Go Chiefs!